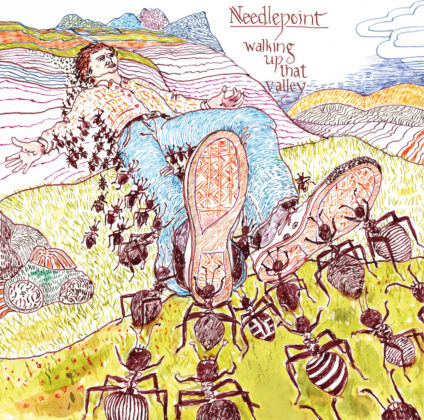 The quintet from Oslo (which used to be a trio) is not a new band. With a ten-year presence in discography and five releases in total, they have the right, at least empirically, to feel they have their own character. Mainly from their third album onwards, Needlepoint redefined their style. While they started playing instrumental guitar fusion rock in The Woods Are Not What They Seem in 2010, without much success, they continued with Outside the Screen two years later, adding vocals and more elements, but without dismissing the dominant elements of their debut album. Clearly, however, they extended to proggier paths. From Aimless Lady in 2015 to the latest The Diary of Robert Reverie, a style from the 70s prog rose, namely Canterbury sound. It is interesting to hear if their new, fifth album Walking Up That Valley will continue on the same path.

There are prog bands that build their character exclusively from the ’70s, without having a strong personality. These bands tend to call themselves – or allow themselves to be called – progressive. There are also bands that mix elements from different genres and add their own touch. Finally, there are bands that radically change the genre, which of course are rarer and rarer. We ‘d say that Needlepoint are somewhere between the first two categories. Although they are a Norwegian band, there is nothing that connects their origin with the music they play. Their music is so much British related, and very much convincingly so. There are compositions that could well be part of Magic Bus’ discography (their last two albums and especially The Earth Years) or songs that evoke the atmosphere of legendary Canterbury bands. This may be positive, but it can also be a disadvantage.

The Norwegians use a number of instruments to achieve a diverse result. Thanks to the sonic diversity offered by the instruments, the compositions have several layers, although the Canterbury prog school remains their basis. Thus, Needlepoint incorporate folk and jazz into their compositions, even elements of 60’s pop, and do so with relative success. Especially regarding the jazz element, it should be emphasized that guitarist-singer Bjørn Klakegg is the one who introduced it to the band’s sound, as he’s the only musician here who hasn’t emerged from the wider rock scene.

The album is distinguished for its smooth character and its few but special labyrinthine tracks. It echoes the individual and collective ability of the group and each band member. There are well-crafted compositions that rightfully impress with their quality, such as I Offered You the Moon, Where the Ocean Meets the Sky and the title track. These are the prog / jazz moments of exemplary compositional and executional level, with Nikolai Hængsle (bass), Bjørn Klakegg (keys) and Olaf Olsen (drums) being the strongest players in the band. Especially the epic layers of the title track and the incredible keyboard solo in the middle of I Offered You the Moon, are moments much more than just memorable. These also include the exquisite Web of Worry, a synopsis of the Canterbury prog phenomenon, with the addition of folk elements (Nikolai Hængsle plays violin, cello and flute). So Far Away balances folk / prog (you can spot the introduction of Jethro Tull’s Reasons for Waiting) and 60’s folk that point directly to the other side of the Atlantic. Another Day also flows in very gentle tones, with the memorable chorus standing out. In Rules of a Mad Man they metabolize Magic Bus’ Canterbury sound. By the way, in a post-covid society this duo would compose a great concert bill.

There is no doubt that as a whole the album is very good. There are weaknesses, mainly regarding inspiration. However, there are very few bands representing Canterbury sound, and thus such bands are essential. Needlepoint can further shape their personal character to differentiate themselves from their counterparts. Their high level of technique is a given, all that remains is to build an identity and write more great songs.

2021 began with a real gem from the Norwegian band Needlepoint, the fifth full-length album of Needlepoint that introduces them to the second decade of their career. Their Canterbury progressive rock aesthetically reminds us a bit of the late ‘60s. With a strong rhythmic base but also very relaxed melodies, they increase speed and spread a musicality of very high standards, strongly emphasizing the elements that characterize them. They manage to transmit an incredible energy to us thanks to the variety of instruments they use. Keys, flute, percussion and psych guitars are abundant, concentrating and transmitting energy through four-minute songs. The only exceptions are the ten-minute title track and I Offered You the Moon where jazz improvisations are developed with psychedelic sounds and soft pop vocals, mixed all together, resulting in contemporary Canterbury prog sound.

Listening again and again to Walking Up That Valley, we find out how a modern band should sound. The fresh Canterbury sound is here in its best version.

Airbag – A Day at the Βeach

Monday June 29th, 2020 Νέες Κυκλοφoρίες Comments Off on Airbag – A Day at the Βeach