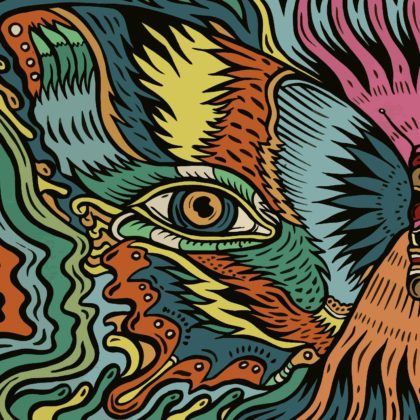 Although this album was recorded at the end of 2019, the year their second album (II: The Big Blow) was released, it was finally uploaded on digital platforms and released in physical form this year.

The Tronosonic Experience camp also experienced a tough loss in March of 2022, when the band’s bassist and founder Per Harald Ottesen passed away after a battle with cancer.

The remaining band members are Øyvind Nypan on guitar, Jan Inge Nilsen on drums and Ole Jørgen Bardal on saxophone. The Shadow Vol. I is released through our beloved Norwegian label Apollon Records. At the same time, however, the second part (Vol. II) was also released, but we’ll talk about that very soon…

The Tronosonic Experience is a purely instrumental band, a choice that can easily expose even musicians with great experience and technical skills. In their first two albums, they somehow magically managed to make me go back to their music and enjoy the flow of those two records. As is the case with the nine-minute opener, Sheik Pt. 1. It is a furious prog / jazz composition with the continuous guitar solos releasing large amounts of energy and euphoria. The dialogues between the bass and the drums are also amazing. Honestly, it feels like an informal competition between musicians, where I can’t tell which member shines the most.

In The Last Stand and Golden Comet the speed drops in favor of the psychedelic atmosphere and the mood becomes more improvisational. The same pattern can be seen in the psychedelic colorful cover of the album which is a reference to The 13th Floor Elevators’ debut album cover, although the association stops at the visual part.

The Tronosonic Experience belongs to the category of the Norwegian wave of instrumental jazz / prog bands such as Krokofant and Elephant9, but they somewhat differ sonically. They are more extroverted, they exude a sense of ease, like they are your cool musician friends that you have known for years. Even the saxophone contributes to this atmosphere, it is often allegro and lively.

For the last song and in this album they prefer a softer composition, as happened in both their first albums with Catching The Nile Perch and Lost Highway, while Sheik Pt. 2, The Sunwatcher and Undertow function as preludes of short duration. Totak is atmospheric, kind of an eight-plus-minute journey.

The Tronosonic Experience know how to play with the flow of their music and after intense prog / jazz compositions, they offer the listener the necessary relaxation at the end. The way the guitar builds the whole atmosphere is really impressive and all the notes sound so impressive and majestic, almost hypnotic. Personally, I really like this approach to their sound.

The Tronosonic Experience is like a runner who, while not a favorite to finish in the top positions, has the way and always manages to run a decent race and finish pretty close to the top. In the end they manage to win over the listener with the substantial and quality of their albums in general.

The double strike of Tronosonic Experience with The Shadow Vol. I and II would be great news if they weren’t also the last recordings of the late bassist extraordinaire, Per Harald Ottesen. Although essentially the two parts are extensive pieces of a single unit, it is equally interesting to consider them as two independent releases.

One listen is enough to convince you that the band sounds tighter than ever. With Øyvind Nypan (guitar) and Ole Jørgen Bardal (saxophone) in a driving role and the rhythm section of Ottesen and Jan Inge Nilsen galloping, The Shadow Vol. I is the culmination of the band’s first two albums. Here the flow is perfect, The Tronosonic Experience’s typical Norwegian jamming prog / jazz-rock / post-rock is more dynamic and effective, and the only thing that somewhat limits the result is the fact that it is aimed at a very specific audience. If you belong there, you will listen to it many times on repeat.