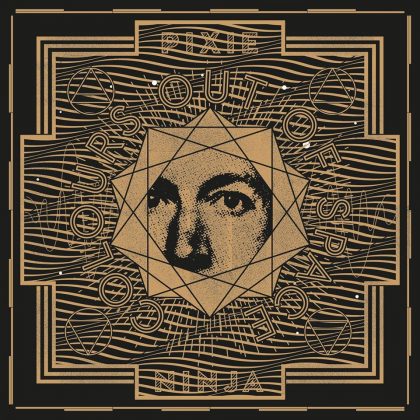 If you had listened to Ultrasound, the first feeling you get after the 44 minutes of Colors out of Space is that Pixie Ninja has changed level in many areas, although the basic principles and characteristics of their music remain the same. Their great ideas, this time presented in a very structured and solid context, form a clear artistic proposal. The feeling of an experimental project that was releasing its debut here has been replaced by the certainty of a complete band with a clear musical vision. Experimentation and mixing of elements remain at the forefront, channeled with greater confidence and perfectly combined, aiming to the optimal flow of ideas.

The fact that Pixie Ninja made their musical vision clearer does not mean that they tried to make their music more accessible. A large part of the experimental side of progressive rock from the 70s onwards parade through the five compositions, mixed with later experimental manifestations of rock and electronic music. Ambient and progressive electronic are the basis of their sound, but the extensions that are added to it escape in multiple directions. There are post-rock developments, krautrock experimentation, industrial aesthetics and a strange symphonic element, which, paradoxically, fits perfectly and takes off the album.

The five-piece concept based on short stories by H.P. Lovecraft achieves its goal despite the absence of lyrics. The dark Scandinavian aesthetic and the great narrative component with which the compositions flow persuade the listener that he / she actually is in the dark texts written by the patriarch of horror literature. From the beginning with the self-titled epic track to the more “relaxed” ending with Strange Days, Pixie Ninja create their own world and effortlessly invite the listener. This is perhaps the greatest asset of an album that lacks mediocre moments and remains oriented throughout its duration.

The production, which is more than perfect, also helps a lot in the success of what Pixie Ninja is trying to do in Colors out of Space. In particular, the mixing of the instruments is amazing and the success in creating a sound that comes from the 70s, but at the same time sounds very modern is just marvelous.

Colors out of Space is the passage of a group of musicians from the category of an interesting project to that of a band that will keep our interest for its next steps. Scandinavian progressive rock musicians are proving once again that for many years they have been carrying the genre forward in its new era.

The wonderful debut of Pixie Ninja had created many expectations and impatience for the second album of the Norwegian-Swedish band. You see, the intense experimental element and soundscape character of their music had secured an indefinable interest. All this was solemnly confirmed in Colors out of Space. Pixie Ninja’s sophomore album is clearly darker, heavier, but also more solid than Ultrasound (2017), with consistently strong electronic elements and samplings, but also with a fairly strong industrial style that blends brilliantly with the band’s vintage instruments and its retro and yet modern progressive rock.

The five tracks on the album are heavily influenced by short stories of H.P. Lovecraft and this plays a catalytic role in the style and partial change of Pixie Ninja’s sound. Especially when listening to the album with headphones, the haunting atmosphere is riveting and the element of horror affects the listener through the multi-layered sound that is masterfully rendered in Mattias Olsson’s production.

Although the compositional depth is fatally sacrificed to some extent on the altar of experimentation, Colors out of Space is arguably one of the most interesting instrumental prog albums of recent years.