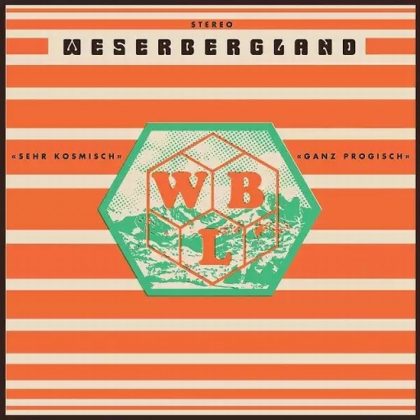 “The Devil told you that! – the little man screamed, and he ran off full of anger and never returned”. Rumpelstiltskin is but one story among many others by the Brothers Grimm, that is said to be set in the Weser Uplands or Weserbergland, an outback in central Germany that adjoins Nordrhein-Westfalen, Hessia and Niedersachsen. Such is the scenery in the hills that inspired legendary icons Hans-Joachim Roedelius and Dieter Möbius of Cluster to set foot at the whistle-stop named Forst and redefine krautrock and electronic music. Between 1973-76, as long as their stay lasted, they would be sided by Michael Rother of NEU! to form Harmonia as well as none other than Brian Eno himself. Sehr Kosmisch, Ganz Progisch (german for “Very Cosmic, All Proggy”) is Ketil Vestrum Einarsen’s first attempt as a bandleader and his goal is to celebrate the music produced in the above-described setting and by a stretch, the space / kraut music of the 70s.

Ketil Vestrum Einarsen is already a prominent figure of the norwegian prog scene as a member of White Willow, Pixie Ninja (who have both put an album out this year) and Kaukasus, formerly a member in Jaga Jazzist and with appearances on Motorpsycho and Wobbler albums, among many others. Weserbergland however is distinctly all his. The renowned flutist is responsible for the general direction and the compositions of the album while performing an array of instruments. Together with swedish drummer Mattias Olsson (of Necromonkey and well… Änglagård as well as a bunch of collabs he’s had with Einarsen), Jacob Holm-Lupo (White Willow) and Gaute Storsve (Sleepyard) interchangeably on guitars and bass, they comprise the main core of the band. Several guests add to the mix, such as Einar Baldursson of the swedes Gösta Berlings Saga or Erik Johannessen and Lars Horntveth, both of Jaga Jazzist, who help create an album that can be enjoyed in the background and into the limelight.

Four lengthy selections ranging from 9 to 16 minutes are on the menu and they all seemingly pay homage to famous figures that have one way or another found themselves hanging around the Weser river, somehow (and semi-speculatively). Τhe opener, Tanzen und Springen is a title taken by a madrigal attributed to Hans Leo Hassler. It is necessarily a poppy cut with repetitive drums and whopping synth bass to give it an edge. A winner. Next comes Gustav Mahler’s Das Trinklied vom Jammer der Erde – yes, all the tracks are named after famous compositions, although they are nothing but namely homages. This is by far the proggiest track on the record, showcasing new-age aesthetics upon ambient and symphonic themes and loud rocky drums while the lads are not afraid of getting noisy. Bach’s Kunst der Fuge is not exactly a fugue, but I would think it attempts in a mechanistisch contrapuntal fashion and it gets extra naughty at it’s 3rd part. Tristrant’s four movements are paying tribute to 12th century german poet Eilhart von Oberg and his oldest surviving version of Tristan and Iseult. Keeping up with their motorik feeling and never losing experimentation points, the closing track is wild and uncompromising. Heavily processed new-age textures give way to the ending jazzy battle featuring a flute, a clarinet and a saxophone. The ideal bookend.

Sehr Kosmisch… is not a krautrock album, although krautrock is the starting point here: the repetitive dreamy sequences and the lush orchestration layers are present. It may derive influence from Harmonia (incl. the Harmonia ‘76 recordings with Eno) and perhaps from Cluster’s Sowiesoso album but it is certainly not a retro album. Compared to the aforementioned mentions, it lacks their bizarre, loose experimentation and the through-uncharted-territories attitude but it also sports an avant-poppier sensibility, akin to that taught by NEU! or Kraftwerk. But even that, the motorik approach is being deconstructed, dismantled and offered as a discontinuous dish in a rather structured cosmic kitchen. The result, thus, may be not be something entirely new but it is nevertheless served as new. From one end to another, I would suggest that Sehr Kosmisch… is your non-typical progressive rock album with pop tendencies that can be psychedelically symphonic while retaining its kraut references. Recommended to the kraut-heads and prog-heads alike.

Assuming that the band of Ketil Vestrum Einarsen with Jacob Holm-Lupo, Mattias Olsson, Gaute Storsve and many glamorous guests falls into the category of supergroups, then it is a rare exception. Their debut is based on krautrock rhythm and abstraction, but also on the modern prog / post-rock, with intense experimental character, pop dynamics and an aura of an undeniable freshness, with literally everyone contributing to it. Olsson with his personal motorik playing, Lupo and Storsve with their intelligent basslines and the definite mvp, Einarsen, plays, samples and programs amazingly. The four compositions are a destination of frequent future visits with memorable ‘sights’, such as the notes of Einar Baldursson (Gösta Berlings Saga), Brynjar Dambo (White Willow), Stephen Bennett (Henry Fool), Lars Fredrik Frøislie (Wobbler), Lars Horntveth and Erik Johannessen (Jaga Jazzist), and Storsve’s guitar playing, which probably surprised me most of all.