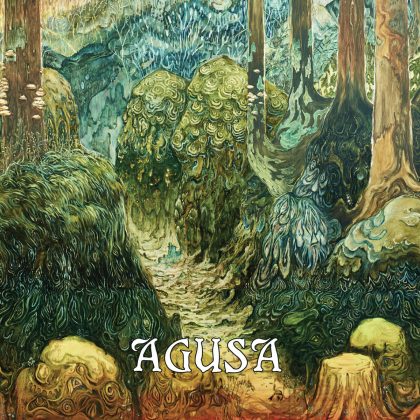 First it was their gorgeous debut (Högtid) that revived with a good dose of inspiration the early 70s prog / psych rock, then came two sublime gigs in Athens (one of them is documented in Katarsis, a live album that came out last year – our reviews here). These are but two reasons why the Swedish retro progsters swept us off our feet. Now the time has come for the follow-up of their second album Tvä, which was very good, but failed to exceed our expectations, so Agusa come back with their self-titled third album intending to charm us once more with their warm instrumental and progressive sound that always marked them.

Two years intervened since the last outing of Agusa and within this time a line-up change took place, namely keysman Jonas Berge was replaced by Jeppe Juul. Aside that, the flute of Jenny Puertas has an upgraded role compared to their past albums, while the duo that consists of Mikael Ödesjö and Tobias Pettersson on the guitar and bass respectively (the only original members) still leads the way.

After repeated listens and putting their influences under the microscope, it is deduced that the folk element that they introduced to the musical equation of Tvä is as strong as ever, while at the same time the improvisations have taken a back seat. In Landet Längesen that kicks off the album, the haunted melody of the intro plunges us straight away into the fairy-tale surroundings of the Swedish. What comes next is equally impressive; the composition stretches out, it breathes, relaxes and then pounces again through a series of inspired melodies and superb jamming moments courtesy of the guitar, the keyboards and the flute. Sorgenfri that comes next is the shortest number in the album and it picks up on the initial theme, but falls short of raising enthusiasm. Along the same lines is the almost nine-minute Den Förtrollade Skogen where the opening theme of the flute betokens a fiery continuation which never comes, mainly because of their safe-enough approach.

The second half of Sagor Från Saaris with the ambient pause and the proggy eruption at the end brought to mind the dynamic disposition of their debut album and it would make us happy to experience more often this feeling in their latest releases. The fact that the adventurous prog style is where they are at home is verified in the astonishing Bortom Hemom, an enthralling composition complete with rhythm changes, riveting melodies and mature solos.

On the downside, I would also include the drumming of Tim Wallander, even though I can’t tell if it is because of his limited technical skills or his limited role. Nevertheless, their option to diminish the more complex progressive moments for the sake of a more melodious approach strips something away from their musical DNA and, in my opinion, here is where heart of the problem lies. In tunes like Landet Längesen and Bortom Hemom they proved that they can get the best of both worlds; all it takes is to come up with an album that displays their full potential!

On their third studio album, the Swedish return to the durations of their –already legendary– first album, but style-wise they keep walking the prog-folk path of their second one. The music is now based mainly on folk melodies performed by the flute, while the outbreaks of the guitar haven’t gone missing. What is missing, to a great extent, is the hooks. The music of Agusa is now smoother and follows beaten tracks. Most notably their rhythms they choose are not adventurous even for a single moment. Of course this doesn’t mean that the listening is wearing. Quite the contrary, the record flaws without a hitch and the beauty of the melodies, performed so sweetly by the musicians leave no other choice to the listener but revisiting the album again and again. Agusa have pulled off with their two latest releases to reach a respectable level. Unfortunately, it seems that this level has not only a lower, but also an upper limit.