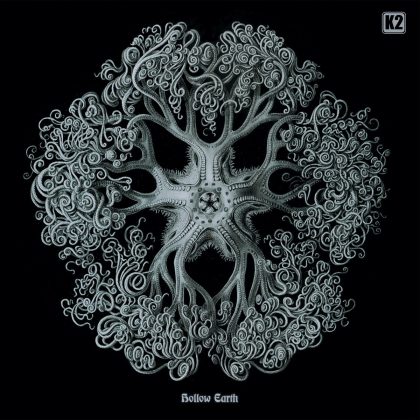 Every year it is verified that the tendency for reapproaching the vintage progressive rock isn’t just an ephemeral one but an ongoing need for some bands to reminisce about an artistic era which isn’t gone, never to return. Ticking off the bands that did so within his year which will soon be over, Wobbler,  Magic Bus,  Agusa,  Soft Power,  Arabs in Aspic, Jordsjø, Discipline, Skog Under Jord are magnificent samples of this tendency for vintage progressive rock that made the suspicious, forward-looking fans to think twice. This new-founded Swedish trio, whose debut album we review here, can be added as well to the list above since their aim is to transplant the imperishable late 60s – early 70s prog / psych rock spirit into present.

Propelled by the pseudoscientific concept of the Hollow Earth, they named their musical cabal as such. The band members are disciples of a mystic heresy, a fact that permeates the compositions of Out of Atlantis, metamorphosing the whole process into a delirious initiation. A precise bio is unavailable since their true identity is a close-guarded secret. The band consists of Cristobal Nemo (Vocals, guitar, organ), Don Pharaoh (bass, vocals) and Rod Handel (drums).

Their style draws on the top moments of British prog and psychedelic rock. It becomes plain from the get-go that the sound of the Swedes relies heavily on the very early, but also the early 70s Pink Floyd with the vocals of Nemo sounding like a haunted variation of Syd Barrett’s voice. Moreover, the great legacy of the Canterbury scene (and more precisely the earliest Caravan) as well as the primeval side of Deep Purple (Rod Evans era) have left their impact on the album. At the same time, a few dotted parts may recall some great bands of the early seventies, like Still Life and Spring.

The album consists of five admirable psychedelic prog tunes and an average one which takes nothing away from the overflowing quality of the album which kicks off ideally with the amazing psych / prog Electric Eden that features an imaginative Hammond organ whose role is crucial especially in the middle section of the song. The title-track is the pure instrumental moment of the album, a heavy/rock composition with jazzy dashes whose intro brings back the spirit of Terry Howells of Still Life. The Floyd-ish Incantation verifies the admirable development of the album while the sarcastic title of Ave Satanas or Tea-Time with Lucifer crashes into a 60s heavy reef where Iron Butterfly, Vanilla Fudge and Deep Purple coexist. The peerless 17-minute epic Behind the Ivory Gate with its memorable organ melodies of Nemo is along with the starter the summit of the album. Riders on the Vapour Trail doesn’t hold a candle to the aforementioned compositions since it is an occult composition which the band should work a lot more and it is based on a banal riff that you get the feeling that you have listened to it tens of times but you fail to spot the exact influence. It should be stressed that on the entire album the guitars have a supportive role allowing the Hammond organ to be in the lead of the music of the Swedes.

It is impressive that Hollow Earth compose music as if they have many years of experience under their belt. At the same time, they seem to be fully aware that this kind of music has a meaning only if it is played with this old-fashioned, analogue and warm sound and also if you filter the horizons of your influences. The Swedes did well. A new-founded band that came literally from the leftfield and they don’t simply tickle our fancy but their album is one of the candidates for the gems of the year and compete with the rest summits of the progressive albums that came out in 2017.

Hollow Earth’s Out of Atlantis is an album where it becomes instantly plain that it is a quality one because anything you listen to in there is so familiar and so well-placed that attracts you irresistibly in its world. King Crimson, Camel, Deep Purple and many more influences from the legendary 70s coexist in the magnificent compositions of the Swedes which emanate an intense vintage feeling but they possess a gorgeous character thanks to the impeccable playing and the chemistry. Especially when it is solo-time, you can tell that the band is tight as it gets, with solid ideas about jamming and well-rounded views on the vintage prog. Listening to Behind the Ivory Gate alone is enough to form an immediate, and possibly positive, view about Hollow Earth.