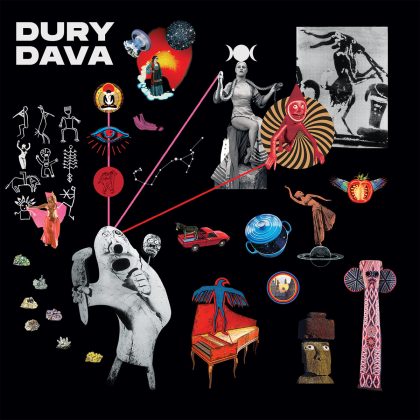 Dury Dava are: Giorgis Karras ( Electric guitar, dilruba), Ilias Livieratos (drums, percussions), Dimitris Kouloglou (vocals, electric guitar, bouzouki), Karolos Berahas (Bass, keys, synth) and Dimitris Prokos (Clarinet, ney, synth). They definitely are one of the most special musical suggestions coming from Greece. They exist since 2016, and recorded their first album in Hobart Phase. The ten songs of the album were recorded live, without overdubs, they vary in length and the whole album lasts almost 70 minutes. The style is unique for the Greek standards. The band refer to their music as being inspired by the psychedelic sound of the 60s, krautrock, the traditional sounds of the east Mediterranean and the directness of punk, creating a contradictory sound, while it is quite interesting that they have chosen to sing in Greek and one song in Turkish.

Psychedelia and experimentation made in the East Mediterranean

In our days, there is a number of bands that try to make psychedelic music, in different frames. However, no matter the frame, the elements that make efforts stand out is firstly the creation and integration of the listener in a convincing psychedelic microcosm and secondly the experimentation and being different than the usual. The technical and musical expertise is well received of course, but only if they complete in the previous two attributes.

Dury Dava manage to mainly create their own microworld in their debut, with a wide open access to their audience, without however making the transition easy. The description that they give to their music isn’t far from reality. The spirit of the 60s psychedelia is here, being given by an evolutionary process that followed in the 70s through space rock and mainly through krautrock. The motorkik rhythms of Can, the communicative spirit of Amon Düül II and the cosmic momentum of Hawkwind exist in their DNA. The punk attitude that the previous bands had anyway, is more apparent in the vocals and in some shorter tracks, with clear post-punk and new wave influences. Their biggest win is the unstrained and complete way in  which they have incorporated the tradition of the east Mediterranean, using the “intoxicating” eastern melodies and rhythms in order to intensify the psychedelic range of their music.

The trip that Dury Dava put their listeners in, goes through 10 songs that despite their common axis, are quite different from each other. Αφρική that opens the album is the ideal entry to the spirit of the album while the deconstructed Κάνε Λίγο Αληθινά closes the curtain successfully. In between we find psychedelic epics like Τρίπτυχο, 35422 and Ταρλάμπασι, that alternate with more direct and explosive Έλα Πάλι Να and Αταξία, the unique particularity of Ζούπα and the hypnotic Καλοκαίρι and the unearthly chaos of Σατανά.

The only real objection that someone could have is the vocals. Obviously no one would demand from Dimitris Kouloglou to be sweet-voiced. However, the way he sings is quite unique and it might estrange even the fans of the genre. In the other hand, he adds to the uniqueness of Dury Dava and is part of their identity. Personally, the only thing that annoyed me is that he gives a sense of affectation that is not present in the music part of the album, and it’s probably a result of some of the lyrics.

And here is where the complaints end. Dury Dava managed with their first album to create one of the most special albums in the history of the Greek progressive and psychedelic music. With clear knowledge for what they are playing and with lots of talent to achieve it, they create their own musical paradox. And just for that they deserve to be praised. Hopefully, in the future they will keep the same inspiration and they will evolve even further, travelling the Mediterranean while avoiding the shoals of standardization.

Like a ritual, with the energy approaching the Dionysus rituals, the Athenian Dury Dava engage in a meaningful fuss. Psychedelic sounds with the wide sense are in the epicenter of the first album, where they appropriately rudder the mood of the songs. The surrealistic character that is imprinted in the lyrics, it gradually intensifies the euphoria and it weaves a veil of mental uplifts around the listens. It is quite important and fascinating the fact that the four member band, ambitiously but quite successfully sets up western, eastern and African sounds. Despite their young age, the members of Dury Dava seem to have digested the 60s and 70s traits that might come from San Francisco ( which is evident from the psychotropic brand of the songs in the LP), or from the cosmic rock of Can (that is evident both in the exotic and otherworldly elements and their funky groove) or the wild lyricism of the Velvets (you can feel that in the coarse romanticism and their lysergic evolutions) or from their jazz/blues breaks of Captain Beefheart (which you get from their tangled song developments) that they translate delightfully in their own  musical dialect, away from self-constraints and predetermined  outcome of their style.