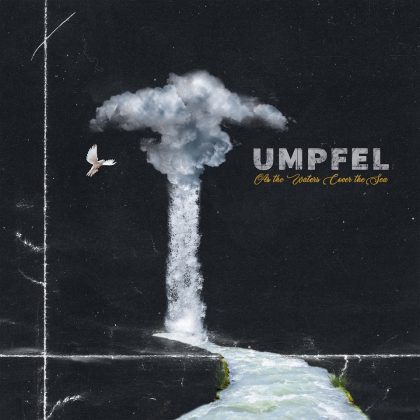 The debut album of the Norwegians Umpfel entitled Cactus filled us with hope that a new force would be added in the progressive metal fold, but unfortunately no major label signed them which would give them the necessary boost to reach a wider audience. Four years later, they offer us their second album that goes under the title As the Waters Cover the Sea showcasing a remarkable stability with regard to the quality of the material they put out.

The heavy side of Umpfel becomes instantly perceptible courtesy of the growls that emanate during the first seconds of the opening track and the melodies that join strategically the torso of Burning Water don’t remotely take off the edge of the dynamism; in fact, this is an art that Umpfel have mastered. They set up their compositions magnificently while their ideas are not drowned in copious details. A main riff can well be a composition into its own with added melodies thrown in and changes in the arrangements and the rhythms that keep the interest engaged. The same trick, more or less, is applied on Sphere of War, only that solos are more abundant here (both in guitars and the keyboards) and the drumming is livelier and as a result they infuse a true fusion / metal experience.

Tension is considerably diminished on the somewhat flat What Else but it rebounds on its usual standards with the outstanding Shofar and the incredibly good guitar parts of Anund Vikiingstad. The eastern melody of Peddler of Words combined with the imperceptible jazz aesthetic brings to mind the best moments of Pain of Salvation in the 00s and then comes the title-track which sounds somewhat outmoded at least with regard with the use of keyboards. Glass Score ranks among the top compositions the Norwegian group has ever come up with, where the melodic, 70s prog of Caravan is the most obvious influence and it is used perhaps for the first time to such an extend. Respectively, they take a stab on the next track to mix this sound with contemporary guitars and a metal slant. I’m not quite sure they did it successfully (for the time being).

The record is bookended with the lengthier compositions, Tree and Rosetta, and it is a grave mistake that they are at the bottom. Their artistic structures and, above all, the richness of the ideas included render them as the best compositions of the album and it would be wise if they were somewhere midway (where the interest falters slightly). At any rate, Umpfel redefine how quality progressive metal should sound. Farther than what bands like Haken advocate; maybe closer to what once Wilson attempted in Deadwing. We relish what we got, we expect better things to come down the line.

Blending heterogeneous musical influences which nevertheless do not end up as a senseless mishmash is a trait of Norwegian prog and Umpfel belong to this category following the path that earlier Norwegian bands, like Leprous and Ishahn, paved. As the Waters Cover the Sea is a modern prog rock album with a few jazz dashes (at times it recalled John Zorn), strong math influences and both clean and brutal vocals though the former are used more widely. The Leprous-influence dominates the album but in my view Umpfel’s compositions take a proggier slant and moreover they seem unwilling to build their tracks on gargantuan melodies, but rather they opt for complexity. The instrumental Glass Score is an illustrative example whose main melody nods to Genesis, yet it isn’t the one that carries the tune; it is the changes of the rhythms and the melodies. Other songs that made the cut for me are the massive Sphere of War, the straightforward Shofar, but also the Dream Theater-ish Tree without implying that the rest lack, quite the contrary the album is even. A wonderful prog release from the Norwegians which suggests that they will keep us engaged in the future.