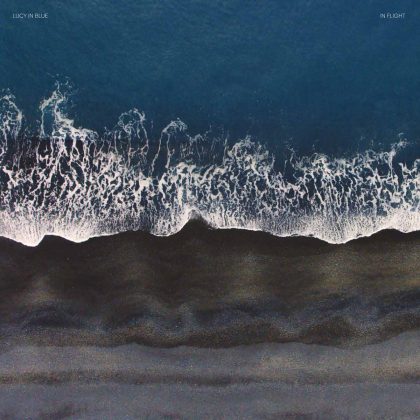 I stumbled upon the case of the Islanders while searching for albums of the last few years that slipped through the cracks. Their debut album went unnoticed; therefore, a brief introduction to the achievements of the band is necessary. Lucy In Blue from Reykjavík were founded in 2013 and the information I garnered before listening to the album indicated that the band’s style is a hybrid psychedelic prog with direct nods to the 70s. The quartet of Lucy In Blue, a monicker that hints to Anglo-Saxon influences, engaged listeners of the deep underground with their debut album in 2016, as well as through their much-discussed live shows.

There is still hope in this sorrowful shore

The cover of the album juxtaposes the artistic intentions of the band. The blue, white and grayish shades mirror what the listener will face once the music begins: a deep-rooted nostalgia and a melancholy that veils this inspiration of the Icelanders.

Alight Pt. 1 introduces the listener to In Flight: dim-tempoed, the haze converses with nostalgia, poetic tendency and wonderful double vocal melodies. These are, in short, the elements that characterize the album. In Alight Pt. 2 introduce us to their heavy side which is blended with an eastern Set-the-Controls-for-the-Heart-of-the-Sun structure where lyricism, trippy guitar solos and keyboards –which intensify the grayish, but ethereal atmosphere- coexist harmonically. Respire is one out of the two masterpieces off In Flight and one of the best compositions of the year until now. A misty veil clads the beloved sound of mellotron as an imposing, repetitive bass-line dominates, whereas the vocal harmony combined with the poetic lyrics and the agonizing solo take the song to the next level. Matricide was promoted as the album’s single and it is building around an easily-digestible heavy riff that gives off a 70s aesthetic. The first out of two successive instrumental songs is Nùverandi which is an elegy of Floyd-ish lament with indirect references to Porcupine Tree or even Riverside. Tempest is the album’s most daedal tune, a composition that partially verifies the prog tag they have been granted. The title-track, the second instrumental track, is a masterpiece and an apotheosis to introversion: grief, pain, melancholy, but also rays of hope are weaved together harmonically and produce a luscious cut. Our journey is rounded with the three-minute On the Ground which is in a similar vein with the previous material.

The conclusion which is drawn from the initial listens of the album is that Pink Floyd, of all the phases they went through but mostly the 70s era, ignite Lucy In Blue to build their sound and aesthetic. Their successors (early Porcupine Tree, Riverside – Shrine of New Generation Slaves and Love, Fear and the Time Machine era) as well as mellow moments of 70prog rock are filtered through their main influence.

Even though an impression lingers that there are subtle tribute tendencies, it is also clear that they have labored to achieve this very good indeed result and their artistic peculiarity was instrumental to it. Their place of origin combined with their influences produced a musical proposition whose, granted, the revival of the old ways is its signpost (influences, production, style) without bringing on the table anything new, yet is achieved in an honest and creative fashion. The interest in In Flight fluctuates, namely there are compositions that will captivate the listener and some others that are less likely to do so. It is a certainty that this album will make them more popular and the fact that they were included in the line-up of Roadburn Festival played its part. In short, Lucy in Blue make music full of sentiments which have to do with human nature. After all, isn’t this the ultimate goal in art?

The second album of the four musicians from Iceland through the lovely Karisma Records was simply impossible to go unnoticed as their debut album did three years ago. Undoubtedly, In Flight falls into the category of contemporary, nostalgic revival of the first half of the 70s, although it would be more precise to say that they are on the fine line of transition from psychedelia to prog rock (the latter has a more dominant role), but the main expressive outlets like the vocals or the dragging, ambient development are rooted in the British scene of the 1969-71 era. In these fields particularly the influence of Pink Floyd is so intense which it would be reasonable to evoke annoyance, hadn’t the quality of the compositions been so high (for instance Alight Pt. 1, 2, Respire, Nùverandi, In Flight). Listening to In Flight one can’t help but ask themselves how much better the band can fare in the future. The only certainty is that Lucy In Blue merit the attention of every fan of retro-prog sound.

Jostein Smeby (Arabs in Aspic): “We don’t think about what will sell or not. We make music that we like”

Tuesday June 30th, 2020 INTERVIEWS Comments Off on Jostein Smeby (Arabs in Aspic): “We don’t think about what will sell or not. We make music that we like”