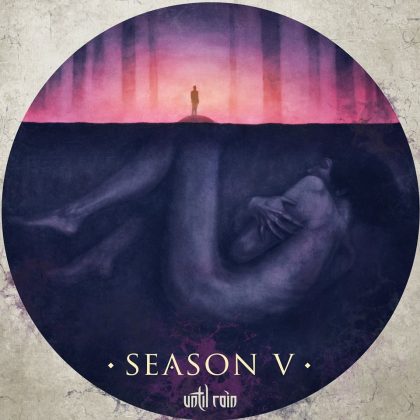 Until Rain have more than 10 years in discography with releases and experience that any new band would be jealous of. In 2017 they released Inure which received great reviews (our reviews here) and allowed them to continue their concerts in Greece and Europe while they created a better cohesion amongst the new and old members. Season V is their fifth album which now creates expectations from one of the longest running bands in Greece.

There are levels to this…

There is a bet when a band changes the lineup. They need to prove to themselves and the audience that the new lineup moves them forward as a unit and that their ability to create a cohesive sound is unchanged if not advancing. Until Rain, with their previous release Inure, created a lot of hopes for the future of the band since they managed to create such a great album with a lineup that showed cohesion. The bet now is to show progression and growth with their new album in order to further establish themselves as one of the bands that stand out in the progressive metal genre.

Production wise, the bands keyboardist Lef Germenlis manages to create a kind of cinematic aura to the album that helps create a narrative throughout. While the heavier sections can be described as a bit muddier in the production (e.g. Qualia), this adds emphasis to the melodic parts of the songs which they seem to want to draw attention to.

Unfortunately, when it comes to songwriting it seems that Until Rain have taken a step back with songs lacking nerve and purpose. The songs seem to say what they have to say in the first few seconds and they don’t seem to grow as they used to. The overly charged vocals seem too deliberate and as the album progresses the mid low tempos and melancholy end up being tiring.

Eventually, the cinematic aura that the production helps create, feels nerveless by the end of the album since most of the rhythm sections sound low in the mix (especially the drums sound like they’re in a different room than the rest of the instruments) and don’t offer a lot in the development of the songs. That’s to say, when the bass, heavy guitars and drums to most of the lead like in the song Ascending we get glimpses of the great songwriting that the band has offered in the previous albums.

The conclusion after repeated listens of Season V is that there are levels to creating a good album. In 2019 it is not enough paying attention to one or two things in creating your record. There needs to be careful thought in every aspect of songwriting, mixing and production. Until Rain have definitely shown in the past that they can create solid albums and with the necessary growth and attention they created expectations for a great album. Unfortunately, Season V is not it…

Until Rain have always been known for the wide range musical influences and their love for experimentation and in Season V they continue the tradition and offer something new and different. The band brings to the table a less heavy and energetic sound in comparison to their previous releases, yet much more emotional, relaxed and atmospheric. The album is very well produced and the melancholic atmosphere dominates throughout the entire record. I appreciate the amount of variation between the songs on this album. Sometimes the band is in a very heavy mood (Ascending, Time Escape) and sometimes so soft and emotional (Inner Season, In Times of Despair). The guitar sound is clean and fits very well in combination with the piano and the keys. The vocalist (Cons Marg) has a very effective way to transfer feelings through the usage of his voice. The guest appearance of Vicky Psarakis (member of The Agonist) in The Long Break is one of the highlights here. The lack of catchy songs is very noticeable and that’s why this record requires multiple listens especially if you are just started your journey with Until Rain. The members are all clearly skilled musicians and the absence of the long epic track is a big surprise for me, especially because the long compositions were my favorites on their earlier works.

In conclusion, to be perfectly honest, I was expecting a little bit more, but nevertheless, it’s a solid and enjoyable release that will help keep their position in the prog metal world.