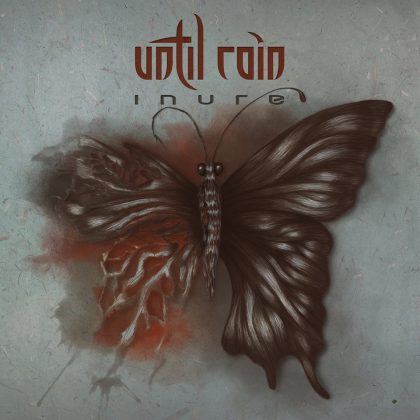 Four years ago, the second album of Until Rain heralded a promising band with the ambition to make its presence felt in the progressive metal firmament. In the time that followed and up to this day, some changes took place in the group from Thessaloniki, Greece with regard to the line-up, as well as their musical horizons.

The founding members Theodore Amaxopoulos and Lefteris Germenlis (guitars and keyboards respectively) were the only ones immune to these changes and the band’s current formation is a multicultural one with the addition of Matthew Vella on the drums, Donna Zed on backing vocals and the more experienced compared to his predecessors Linus Abrahamson on the bass. All-important is the replacement of the singer Yannis Papadopoulos (who joined Wardrum) by Cons Marg.

Their new outing Inure is, if anything, a bet for the cohesion of the retooled line-up which is called to live up to the expectations their previous record set.

A beautiful, ambiguous cover depicting a half-decayed butterfly with its left wing in a decomposed state which is in stark contrast with the blooming right one predisposes for the lyrics’ content and illustrates the album’s title. People “inured” to the senseless injustice in the world, in reality their emotions have been subjected to an irrevocable decay, veiled by a façade of cynicism. Inure chronicles the anguish of a pseudo-happy world and inevitably it sounds much darker than expected.
Progressus in Idem kicks in with the nostalgic notes of the barrel organ out of an unspecified past of which, as we gather from the lyrics, there is nothing left but a bitter remembrance preserved by people who apropos of being forced to abandon their homeland there is nothing left for them but the hope that they will return some day. This bitter song heralds the new musical direction that the band means to follow, which is much heavier and places more emphasis on the atmosphere. The use of death vocals, meant to play their part in the storytelling, is a surprise, while Donna Zed’s backing vocals contribute positively to the final outcome.
In New World Fiction, which is less stressful but equally bitter, the melodies spread out beautifully aided by the piano whose notes seam to weave successfully with those of the guitar that plays a wonderful solo and verifies this impressive trademark of the band. In Because Something Might Happen, one of the record’s top moments, the band confirms its progressive slant and verifies its knack to devise lengthy songs. Blending their past with the fresh elements they put on the table, this tune features heavy riffs, djent nods, while death vocals are incorporated once more and intertwine with the clean ones. From the sixth minute onwards, there is an instrumental section beautifully arranged that gradually ends up loaded with the intent sounds of the keyboards and the re-emergence of vocals. Two melodic tunes follow up; This Fear is the first one that starts on a melancholic note and develops into a progressive piece (with neo-prog tinges) and A Tearful Farewell is the second one that certifies the sophisticated teamwork between the keyboards and the guitar, which is also present on Τhis Solitude, only heavier this time. Butterfly Invasion is one of the songs that, though short in duration, are crammed with so many ideas that listening back to them will always reveal new qualities to the listener. The ballad-like Broken Wing shows that the band plays quality music even when opts for simpler structures (and once again we have a beautiful guitar solo). The title track, which is the lengthiest and bookends the album, possesses the majesty of a grand finale. Adventurous, it emits the intensity of the heavy riffs that give way to the piano for the riveting last minutes that seal the virtue of the album and stress its importance.
In conclusion, Until Rain decided to try a different route with Inure, undaunted by the risk that such a move encompasses. The final outcome lives up to the expectations. The future of progressive metal lies with that kind of bands whose music functions as the link between a decayed past, out of which they keep the highlights, and of a future that looks bright.

Exactly four years after their critically acclaimed Anthem to Creation album, Until Rain are back in the game with their new release entitled Inure. The band continues to combine different influences and to offer songs which are rich with elements that characterize the prog metal genre. The new vocalist Cons Marg is very gifted and his voice fits perfectly to these songs. Although there is no bad number on the album, the opening Progressus in Idem and Because Something Might Happen are great examples of how these skilled musicians make very interesting variations and keep the listener’s attention from start to finish. Two mid-tempo ballads This Fear and A Tearfull Farewell are made in the best tradition of the classic prog metal sound with some changes in mood and sophisticated instrumentation. All in all, Inure is a very enjoyable record and I would recommend it to anyone who appreciates progressive metal.

New video/single by Until Rain