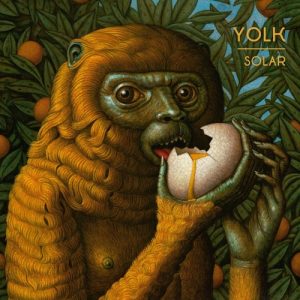 Yolk were formed in the mid-90s in Dunkirk, France. Their 20-year course, though discordantly sparse, seems to be rich in experience and constant progress, carefully preparing each and every step. Ιntegrating the particularities of bands since they time they first started -mainly at the level of experimentation- they managed to create a reservoir of knowledge and influences through which they draw inspiration and manifoldness in their expression. However, beyond their jazz / psychedelic improvisational inclinations, their contact with RIO / avant-prog enhances and mitigates their musical vision, giving us works of high quality from their debut to this year’s Solar.

Listening to their two previous releases (Yolk – 2001 and You Decide – 2016), I have the impression that we are dealing with a band guided by its musical instinct. The themes and changes are based on common elements of different genres, and if they do not exist, they have the imagination to invent them. The result is always impressively homogeneous and shows the ease with which Yolk move from one subgenre to another in a delightful puzzler that rewards even the most demanding listener. Solar could not be an exception. It consists of three equally long pieces, Solar, Vanitas and Sepulchre, each with its own atmosphere and style. The main feature and the most recognizable is psychedelia through a free and relaxed development of themes. Less “panicky” in temperament, alternations rely more on fluctuations in emotional charging and soundscapes rather than any musical acrobatics. The  ethereal vocals of Delphine Delegorgue are once more impressive, ranging from Zeul to even Balcan. They spread like a veil over automated improvisations with the guitar on the pilot seat feeding the rest of the musicians who collaborate in an exemplary and effortless manner, supporting with their own contributions a wonderful flow. The crystal clear production gives a live feel that enhances sound, orchestration, the whole ensemble.

Honorable once more in this effort, Yolk continue where they had left off with last year’s You Decide. They managed to recap a cycle, regaining their mood and their passion. In any case, their talent is uncontested. We are dealing with a band that’s constantly in motion concerning live appearances, always anxious and ready to incorporate new forms of expression within progressive rock. Unfortunately, in Greek reality, where such bands do not appear on stage, all we can do is patiently look forward to releases like Solar and enjoy them.

The third album of the French is by far their best and one of the most pleasant and unexpected surprises of 2017. The rare beauty of the beautiful cover (“Sepulchre” by Marc Burckhardt) is confirmed in the three extensive songs that make up Solar. If anything, the structure of epics over 10 minutes long seems to fit Yolk perfectly. The recipe is based mainly on the stunning in performance, interpretation and spark vocals of Delphine Delegorgue and the energetic, orgasmic playing of the rest. Melodies and themes follow one another with an enviable flow that conveys the listener to an avant-prog feast with a RIO base, intense pompous zeuhl spirit and the peculiar psychedelic Yolk element that makes the whole result unique. Rhythm is the main driver and catalyst, but not so much with its usual rigor within the RIO genre, but with an irresistible groove that everyone deserves to experience.