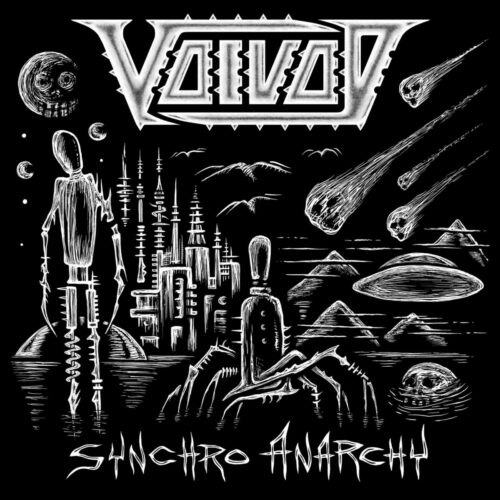 The legendary Canadians return, immobile as stated in Always Moving from their previous fantastic album. The Wake (2018) won the public and the press over upon its release, it was hailed for its intensely progressive character and along with Target Earth (2013) it’s a contemporary classic of the prog metal scene. The refreshing breath that the great Dan Mongrain (guitar) and Dominique LaRoche (bass) gave to the band looks like an elixir of youth and together with the old members Belanger and Langevin, they try to maintain the momentum of these great records.

If there is one band that has been active during the first wave of thrash metal in the ‘80s and has remained artistically restless to this day, it is certainly Voivod. The tireless Canadians are releasing their 15th album this year, the third album with Chewy on guitars and probably the first with this lineup that played in what will be considered as one of their best albums. What are Voidod doing in Synchro Anarchy that they did not do in The Wake and Target Earth? They are essentially perfecting the bridge between jazz and punk, through the metal prism on which they have been working continuously for the last 40 years. Daniel Mongrain’s guitars indicate just that freedom. The jazz guitar professor at the University of Quebec is not a random case of a musician who simply fit into the band after Piggy’s death. His participation in the compositions is more than crucial. Chewy’s guitars at this stage lead Voivod’s music to seemingly unreachable peaks, effectively classifying the group as vanguards of progressive metal.

This development is located without much effort in the wonderful Sleeves Off, which starts as a modular punk attempt, which slowly turns into a vast field of clever riffs that are uniquely connected to each other. Even the short solo included in the song unites its body with the vocal melody, creating a composition of extremely rare beauty. The sci-fi topic is present once again, but in this case Voivod are more concerned about the dystopian society they see before their eyes. In The World Today their thoughts are analyzed with unique clarity: “In the world today, so little is made, too much makes it wrong, we move fast along, we cannot afford to pause, to fight in a cause”. Voivod remain even in their lyrical subjects a deeply revolutionary band, a band that prefers to change rather than remain stable and faithful to an illusion of success. And all this is not personal a conjecture, since in the same song, they mention: “Involve to evolve, sacrifice the sacred, revalue the value”, offering their own perspective on the attitude that we should all have in such a volatile environment.

Those of us who follow the group no matter where it goes, not only do we have nothing to fear, but in Synchro Anarchy we will find one of the best albums of the year. Thrashers who expect to hear something between Rrröööaaarrr and Killing Technology will probably be disappointed, since it is by far the album that lacks speed and intensity compared to classic thrash metal or crossover punk. But those who loved them through more sophisticated compositions such as Jack Luminous from The Outer Limits or Dimension Hatröss‘s Brain Scan, will discover a whole new world here.

It is very rare for a band after almost 40 years and so deep in its discography to maintain such a quality as the one that the Canadians have. The album does not convince instantly like Target Earth, nor does it intrigue with its difficult character as much as The Wake, however it is a work of very quality that blooms relatively slowly in the listener’s ears. The work in the production is excellent, with the bass very high on the mix and with rich dynamics that makes the album “breathe”. Chewy employs Piggy-isms, Frippertronics, jazz fusion passages and plenty of dissonance, Rocky’s interesting basslines tie perfectly with Away’s cyber-punk drumming. Snake’s tone, almost unchanged over time, spits out acid lyrics. Voivod manage to maintain their momentum and create an album related to the two previous ones, but at the same time with a different character. Will they gain new fans with this album? As long as they keep this quality under a major record label, most likely yes. As for their old audience? If I am a typical example, then I guess they rub their hands with satisfaction.

Wednesday May 11th, 2022 Νέες Κυκλοφoρίες Comments Off on Wilderun – Epigone