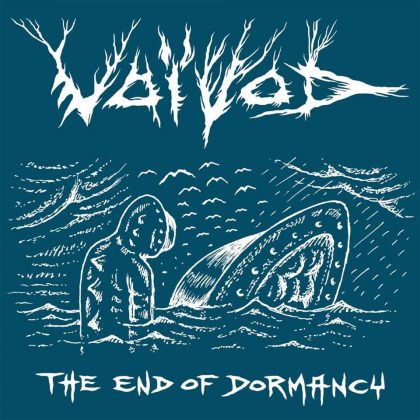 Canadian progressive sci-fi metal innovators Voivod return with a 3-track 12” vinyl and digital EP, titled The End Of Dormancy, to be released on July 10th, worldwide via Century Media Records. The EP is centred around a new version of The Wake track The End Of Dormancy, which has been titled The End Of Dormancy (Metal Section). It has an brass section comprising of saxophone, trombone and trumpet (watch video below). The other two tracks on the EP will be live versions of the new song and The Unknown Knows, which were recorded at the Montreal Jazz Fest 2019.

The EP can be pre-ordered at http://ow.ly/U3XV50zNCKV

Guitarist Daniel “Chewy” Mongrain checked in with the following comment about The End Of Dormancy and its special “Metal / Brass Section” version:
“Francis Perron (RadicArt Studio), who recorded and mixed The Wake, brought his gear and recorded it, then remixed the song. It was an amazing experience, a great challenge for me to write each parts and conduct it. I don’t do that often, so it was a lot of work and I’m very happy with the result, it adds that extra empire, military, roman paddle boat war feel like in the old Ben Hur movie, with the acceleration of the music and intense and stressful emotions that fits the song lyrics perfectly. I’m so proud and happy to play in Voivod, as we can try this kind of madness projects and everybody in the band gets excited and motivated to do new things. It’s so fulfilling. I hope this feeling transpires into the music and that the signal gets to the receiver’s frequency!”

The End Of Dormancy EP tracklisting:

Side A:
01. The End Of Dormancy (Metal Section)

Regarding the music video for The End of Dormancy (directed by Syl Disjonk & produced by Igor Simonnet), the band states: “We’ve had some hesitations concerning the timing of this video release. This was shot in Nov 2019 & we decided to continue as planned. We’ve had concerns that some of the imagery may be seen as insensitive during the current circumstances we’re facing globally, but this video is in the realm of science-fiction & is special to us.” Check out this :