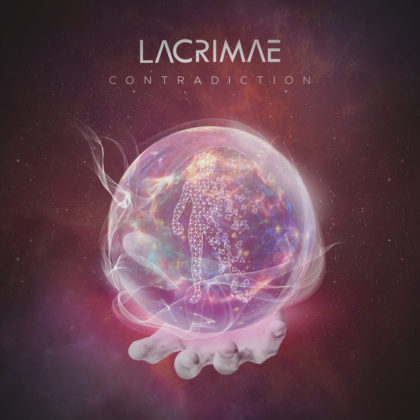 The growth and evolution of the progressive music scene in Greece is continuing and it’s taking different shapes in order to find new niches. Lacrimae is a three piece band and they released their first full length album entitled Contradiction this February. In 2017 they had released a first EP called Entropia which had left fans and critics with saying positive things about the future of the band. The band is comprised of Anna Anaplioti (Vocals and synths) Giannis Arvanitis (Drums) and Dinos Birbilis (guitars) with their first album exploring the different facets of the human psyche.

When our editor in chief sent me the album to review I had forgotten about the existence of the Greek group and I thought the Mexican black metal band had released a new record (we all have a weird past). Thankfully, upon clicking the link I realized that we were talking about the very hopeful Greek band with their very atmospheric and melodic progressive metal sound.

The album starts with the very intriguing The Zone might showcase the more straightforward aspects of the band’s sound. Choppy riffs and changes between fast paced and melodic with the beautiful voice of Anna Anaplioti leading the way in both the aspects of their sound.

As the songs of the album pass one things is very clear. Lacrimae show great emphasis in the setup of the atmosphere in their songs and then combine that atmosphere with technical and heavy riffs. Confession is another great example of that with the lyrics only coming in the second half of the song with the rhythm section creating a beautiful melancholy with the vocals.

While most of the songs are built in that interplay of atmosphere, melancholy and high energy, there is enough compositional variety. Hidden East Shore is an instrumental piece that exudes a middle eastern vibe. But it also exudes an appetite to explore and experiment with different elements and move beyond the comfort zone.

The musicians are obviously very well versed in their instruments, and they don’t shy away from showcasing their technical abilities in each of the songs. But thankfully this doesn’t come at the expense of the compositions as the solos come and go at appropriate moments.

A great example of the above comes in The Architect that is a very classic progressive metal song reminiscent of Haken, or Dream Theater. A great guitar solo that leaves you wanting a bit more (as guitar solos should), combined with the sturdy rhythm section and the aerie vocals.

Something worth noting are the bands that come to mind that might have influenced Lacrimae in their compositions. “Newer” bands in the progressive metal and rock space come to mind  like Haken, Leprous but also our own Mother of Millions and Universe 217. Speaking of Leprous, cellist Raphael Weinroth is featured in the excellent album closer Ulysses.

Lacrimae show signs of growth and curiosity and don’t shy away from experimentation. Contradiction is a great introduction to them, and one of the better debut albums a band can dream of. Hopefully, with the future being more open, the band can tour, work in their craft even more and manage to create stronger compositions that will make them stand out and strengthen the scene even further.

Lacrimae’s first full-length album finds the Greek prog metallers more focused than in their 2017 EP and their choices at the level of collaborators in mixing, production and guest musicians revealing the seriousness of the band’s approach.

Lacrimae have that alternative element that comes from Tool, although more it stems from the prog metal bands that have been influenced by Tool, such as Soen and Pain Of Salvation among others, but have also influences from the Greek prog scene such as Need. We also come across a plethora of djent influences.

In a genre where there is a relatively large volume of releases, differentiation and level of composition play a key role in the end result. On the one hand, Anna Anaplioti’s vocals have an intense theatricality, power, passion and range, but in some places it seems to me that the vocals are at the same volume as the other instruments. This is just an observation and not necessarily as a bad thing. The compositional level reaches exceptional levels, such as the first single, Trail of Cleanse, the heartbreaking Place Called Human Nature and the catchy The Architect.

The musicians are great and even though there’s not a single weak composition, there seems to be a certain height on the level of songwriting. Contradiction is a very good effort, but in their next step they will have to dare even more and enrich their sound with other elements or just perfect their compositions.

Tuesday August 17th, 2021 News Comments Off on Teramaze announce the release of upcoming album ‘And The Beauty They Perceive’