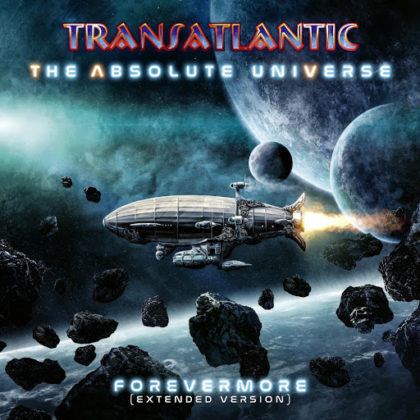 When the first two albums of Transatlantic, SMPTe (2000) and Bridge Across Forever (2001), were released almost twenty years ago, the great musicians who decided to embark on a substantial progressive rock journey were already well-known, each with his own band. Mike Portnoy, Neal Morse, Roine Stolt and Pete Trewavas, companions since at times according to their schedule, take the helm and safely lead to the best hidden secrets of a timeless progressive map. Since then, they have traveled great distances and released important albums, unquestionably. With their third album, The Whirlwind (2009) and the tour that followed, they pompously brought to their time the music that influenced them and gained new listeners. The company of Transatlantic, faithful to its “eclectic” course, returns with the fifth studio album, aspiring to restore the interesting and adventurous aspects, after the unequal Kaleidoscope (2014).

The transatlantic flying vehicle returns to the same points on the map on an autopilot course, with few attractions along the way

One of those collaborations of musicians already renowned through their bands, who gave some “coolness” to the supergroup concept. And if the distance that today separates Transatlantic from the first two albums is a bit unfair, the weight of a new release can only be limited to the absolutely necessary, somewhat less enthusiastic reaction from their fans. Because it is now a given that neither can Transatlantic offer a masterpiece like Whirlwind, nor can prog fans expect them to release another album like that one.

I write these lines as a Transatlantic fan, like anyone who has sung their superb melodies and experienced the anticipation of a new album for more than twenty years, without the hype, but only with that spontaneous reminder of the awe after listening to Bridge Across Forever for the first time. By the way, the wait for the band’s fifth album was probably cautious, to say the least, mainly due to the apparently unequal Kaleidoscope, the inevitable repetition of the patterns and vocal melodies that characterize Neal Morse’s (several) latest albums, and the obvious downward course of the compositional momentum of Flower King, Stolt. The Absolute Universe is a summary of the aforementioned elements in brief.

Yes, the traditional progressive rock, which has been honored with all its magnificence by the four Transatlantic members, in itself constitutes a clear and familiar field of development of their epic ideas, but it is not enough. All fans of this classic sound know that in the past, the 20-minute epics, the extra-long concept albums, the characteristic colorful album covers etc. are elements whose perpetual repetition feeds back its value and timelessness. No one disputes the unique chemistry and technical skills of Portnoy, Morse, Trewavas, Stolt. That is not the point. But when it comes to Morse’s recycled ideas from Snow onwards or from Whirlwind onwards as far as Transatlantic is concerned, all of the above (which we like as fans of the traditional 70’s prog) sound like that controversial sign of exaggeration, like a grandiose attempt to impress that instead of leading to new paths, turns into dead ends that open overtures!

And is that bad? Isn’t that the case with their previous albums? No. With Transatlantic you know and love the fact that they also love music and sounds that are out of fashion, but often reborn by musicians who consider progressive rock refreshing. A decade ago, their vision on sound still had a “freshness”, new ideas and a vision to lead it further, to use their unique synergy to mark the 21st century symphonic progressive sound. And for the most part they did. Because records like Bridge Across Forever, Whirlwind, but also those three-hour concerts that functioned as an audiovisual experience of unique beauty, are elements that will follow them even if the course of the transatlantic vehicle seems to be circling around the same point on the map. Besides, the release of The Absolute Universe in two versions with different durations of the same compositions, but few differences in essence, leaves another blurred image. Why not make an album with the really best moments that the four musicians compose during this period, but instead release two different versions of the same idea, as if offering the short version of the same album?

Beyond that, there are some beautiful ideas and compositions, such as the excellent almost 10-minute Looking For the Light with Portnoy singing (absolutely successfully), Owl Howl, and Stolt’s characteristic guitar inspirations. Although the album as a whole is exactly what one would expect from  Transatlantic today after so many collaborations, participations, numerous albums and tours, i.e. a flawless and well-done summary, it does not manage to excite at any time, and comparisons with Whirlwind or tracks like Kaleidoscope, fatally degrade it. Because Transatlantic, even unwittingly, tend to succumb to a supergroup’s fame and carry the burden of safe repetition against the bold proposal of something fresh. Fresh, not necessarily in the sense of something new, but that of symphonic experimental progressive sound that they themselves advocate.

A mediocre album in two versions, which continues on the quality path of Transatlantic in an effort to create the “perfect” album, but with a clear tendency of repetition that leaves only a few sparks of their greatness in almost 155 minutes (of the two versions).

On the fifth album, The Absolute Universe, the collaboration between Stolt, Morse, Portnoy and Trewavas seems a bit weak. The album is not bad, but the compositions lack the spark of the previous albums. The same goes for the other albums of the main songwriters, Neal Morse and Roine Stolt, in recent years. This quartet consists of top musicians who all give excellent interpretations to the written music. Despite the predictable characteristics of the songs, there are plenty of beautiful melodies and harmonies to enjoy. The Greatest Story Never Ends and Looking for the Light are great prog songs but the rest is not on this level. Neal Morse is clearly the band’s best singer. Roine Stolt’s vocals are limited, but have a certain expressive power and Mike Portnoy has also grown as a singer. Pete Trewavas is the weakest link here, he sounds insecure in his parts. The song Solitude, potentially one of the better songs of the album, is ruined by his voice. The Absolute Universe will be loved by the band’s old fans. Those who expected to hear something innovative can freely skip this release.