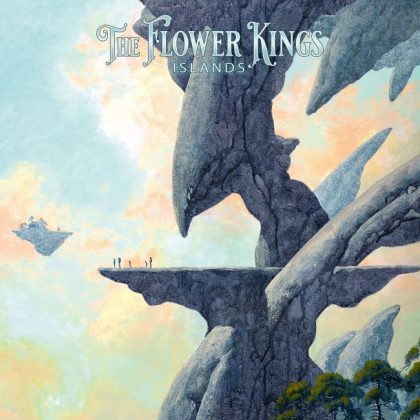 The Flower Kings are one of the most important bands that contributed to the revival of progressive rock in its traditional form in the 1990s. Especially their first five albums were great examples of this wave. Records such as Back in the World of Adventures (1995), Stardust We Are (1997) and Flower Power (1999) prove this with the high level of technique, great songwriting, and successful assimilation of 70s prog influences, but perhaps not in their entirety. This is because one of the elements that distinguishes the Swedish band is the very long duration of their albums, which – as expected – is almost never justified. The average duration of the 14 albums of Flower Kings in their 25 years of recording career to date is almost 83 minutes, and this year’s Islands includes 21 tracks and lasts 97 minutes.

Following the release of the first three singles (Broken, From the Ground, Morning News) from the new Flower Kings album, the chances to be surprised by Islands were unquestionably limited. Let’s be fair, after 13 records and 25 years in discography, this is difficult anyway. In the case of the Swedish prog rockers, however, they themselves are also responsible for this, as they never left the “safety” of the style they had established since the late 90s. The recipe of Yes’ traditional prog with elements that have something from the symphonic side of Queen could theoretically lead to something very successful (as is Roger Dean’s wonderful album cover), but in the end The Flower Kings are trapped in the limits that they themselves pose, unable to excite with the compositions they present on their 14th full-length album.

The unquestionable technical skills of the band members, and the deep knowledge of progressive rock are once again their strongest elements. Roine Stolt’s signature guitar style and sound and Jonas Reingold’s endless bass lines stand out once again, while Zach Kamins’ contribution is just as important. However, overall the album sounds weak, perhaps because of the conditions under which it was created, perhaps because it is understandably difficult for a band with such a long history to sound as dynamic as before. Aside from the obvious love for the genre they play, the diffidence for the slightest innovation would seem insignificant if, even in a purely retro context, the band had offered more than melodic nostalgia for the golden age of the progressive rock sound.

Islands is another very long album in the discography of Flower Kings. 97 minutes is too much and unfortunately the flow of the tracks does not help at all. I think that Stolt’s obsession with giving a lot of music to the band’s fans greatly reduces their artistic legacy. Last year’s Waiting for Miracles was no masterpiece, but surely the band sounded fresher and had much more interesting ideas. The mediocre or indifferent tracks are the vast majority here, and the truth is that even the best parts of the album are not exactly fascinating. More specifically, Black Swan is a catchy mid-tempo song with a successful combination of prog and Queen’s symphonic style and the other highlights of the album are the instrumental tracks Man in a Two Peace Suit, A New Species and Looking For Answers, with Stolt’s guitar in the forefront, and the short jazz / fusion interlude Hidden Angles, which gives a variety to the band’s sound that unfortunately does not extend much to the rest of the album.

Compared to what happened before, all the top and decent moments of Flower Kings, Islands is weaker and unfortunately disappointing, even today when the expectations of a band that has absolutely nothing to prove are much lower than before.

The release of a 97-minute album today, especially when it was preceded by an album of equally long duration a few months ago, is admittedly surprising. That is, especially since the band has ruled out any element of surprise from the very beginning of their career. The double CD / triple LP Islands that evokes the loneliness during lockdown seems to be losing the bet from the get-go.

The album flows smoothly but predictably, and the great musicians who accompany Roine Stolt are consumed in a failed attempt to revive the sound of bands like Yes and ELP, with strong influences from the The Beatles, Queen, and classic 70’s hard rock bands.

I try hard to find good moments on the album, but all I can do is find some scattered good ideas, some beautiful solos, like the one that closes Tangerine or some minimal jazz improvisations. Maybe if all these ideas would work on a album half its duration or they could at least create a beautiful retro 70’s feel, although I doubt it.

The best thing here is probably the cover art created by the legendary Roger Dean.