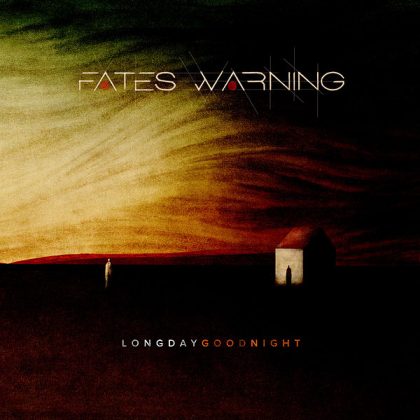 The fact that we are in 2020 and Fates Warning are here with a new release is in itself a happy occasion, especially since this release has so much quality and is so artistic. Truly, I think that the term artist, which is so abusively used nowadays, is fully justified for this unique band. For anyone who follows the band’s steps, this album could not be anything less than meticulous and of high quality. But in my mind it’s much more than that.

It seems as if there’s a mutual agreement between Fates Warning and those who love their music, an informal contract if you will which has been formed over the years. Fates fans never forget the band, their music always accompanies them. And Fates always reciprocate this love and at the same time rekindle it. This informal contract is fulfilled in Long Day Good Night in many different ways.

If I had to identify the record, the shorter and more metal tracks like Scars would be closer to Theories of Flight, but I’d say that many other parts are sonically and aesthetically closer to Pleasant Shade of Gray and FWX. The listener will spot aggressive riffs (e.g. Scars, Glass Houses), great prog passages (The Way Home), small surprises like the alternative elements and acoustic guitars in Begin Again, but also the electronic parts in When Snow Falls with Gavin Harrison’s participation, and verse-chorus-verse tracks like Scars that only Fates can deliver. Special mention should be made of the extremely adventurous and unique The Longest Shadow of the Day where you can even meet jazz passages such as Vera’s excellent solo on fretless bass, followed by tremendous technical progressive metal parts, with Alder appearing somewhere after the middle of the song to give a very emotional performance.

The sound quality is simply superb, with the production being credited to Matheos, the mixing to Joe Baresi (Kyuss, Alice in Chains, Soundgarden among others) and the mastering to Alan Douches. Far from modern trends and contemporary bands that have a similar sound, characterized by Fates’ example and their previous work, this release has a sound that is modern and at the same time natural. The work of Matheos, Baresi and Douches is the least exemplary and gives a unique character to the album that is rare nowadays.

Aspects of this work in the production part can be found both in the sound of all the instruments and the way they balance in the mix, with Vera’s playing being for the first time so strongly in the forefront in a Fates Warning release, while Jarzombek’s drums sound more natural (and not at all overproduced) than ever. The rhythm guitars are excellent with the characteristic Matheos riffs leading the compositions, while the lead guitars by Matheos and Abdow seem as remarkable and impressive as one would want from a prog band. Special mention should be made of Ray Alder, who vocally overcame the difficulties of the early ‘10s and sounds fresh and dynamic, reminding himself of twenty years ago.

But all the above would not matter if the material was not great. Several songs can be considered as classic Fates Warning tracks from the first listen, from the most adventurous, to the most straightforward and the somewhat more experimental. This album is almost “doomed” to be loved by the band’s fans and gain the respect of everyone once again. The aesthetics are at a high level and if there’s a more general theme on the album, it‘d be repatriation, the return to everyone’s shelter, literally and figuratively, and the cleansing that it brings with The Way Home being a typical example, one of the best tracks on the album.

It is certain that various opinions will be heard about this album, as was the case for the band’s previous records. But I’m sure as these lines are written that we will all agree on one thing. The aesthetics, art and songwriting on this record fulfill the musical requirements and the artistic weight that an album bearing the Fates Warning logo must have a priori and this in itself is a triumph.

Fates Warning are like that old friend whom you may haven’t seen for years, but when the meeting happens not only is there no bitterness, but it always is as if not a day has passed and it will be a matter of some minutes when introspectively you begin to perceive each other’s psyche once again. It’s that unbreakable bond.

After the amazing Disconnected, the change of Fates’ compositional course was clear, with heavier tracks and a more solid rhythm section. The (excellent) Theories of Flight restored part of that melodic side that has always been the hallmark of their post-Parallels masterpieces. Long Day Good Night is close to the logic of their previous album, with a few tracks that could turn into classic, timeless Fates songs, but also 2-3 other tracks the omission of which would create a better flow of an otherwise superb album. And if the single Scars that preceded the album’s release reminds us of Darkness in a Different Light, compositions like Destination Onward, Now Comes the Rain and The Way Home are reminiscent of the band that invested in the sweetest melodies and lyricism combined with the technical skills that build their compositions. When the Snow Falls, a ballad with a 90’s aura, The Longest Shadow of the Day, the album’s epic, and The Last Song highlight the high level of Fates and their importance as a band – trademark of their sound. The performances of Ray Alder, satisfactory and characteristic of their style, color Matheos’ melodies and narrate with the same colors in the band’s consistent post-FWX course. Fates Warning remain important and influential, with records that have something of their grandeur, but there is an obvious turning point after Disconnected. However, it doesn’t matter so much, since their albums continue to be adorned with compositions like The Longest Shadow of the Day.

Progrocks.gr: the best albums of 2020

Wednesday December 23rd, 2020 EDITOR PLAYLISTS Comments Off on Progrocks.gr: the best albums of 2020