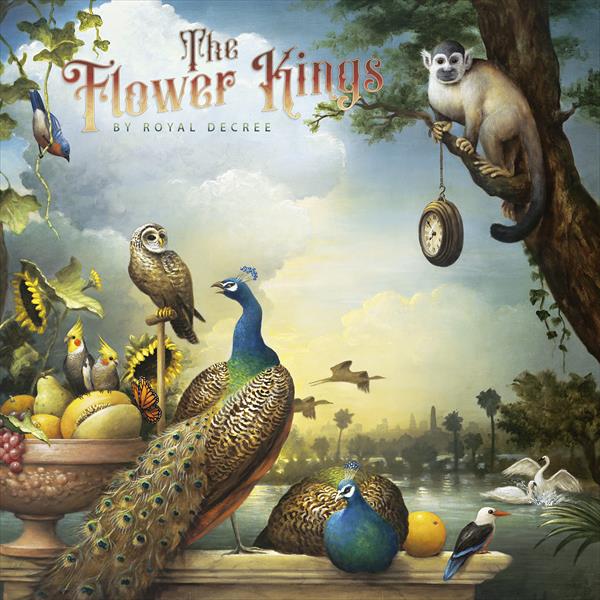 When you look back at the discography of bands the debut albums of which you remember very well, you realize how fast time passes. This year’s By Royal Decree is the 15th album of The Flower Kings, 27 whole years after the unforgettable Back in the World of Adventures, an album that among with some others had marked the return of the traditional progressive rock sound in the mid-90s. After more than 20 years, the brother of band leader Roine Stolt, Michael (bass, Moog, backing vocals), has returned in the band, and this is yet another double album for the Swedish band. Two years after Islands with a total duration of 96 minutes, how engaging can a 94 minute album be as a whole?

Half great, half OK

For more than a quarter of a century, The Flower Kings have been a constant presence in the world of modern progressive rock. Roine Stolt and company have always expressed their love for the past with the sounds and spirit of the modern world. These Swedish prog rock icons have just released their new studio opus By Royal Decree, an album that not only includes some compositions written before the first album, but also brings together Roine and his brother and founding member, Michael Stolt (bass, backing vocals), on a record for the first time in 20 years.

I had pretty much given up on The Flower Kings after some more or less average albums in recent years. On the new release they seem to have found a renewed energy. The 94 minutes of music, divided into two parts include all the Flower Kings trademark elements. By Royall Decree places a stronger emphasis on shorter compositions than in most of the band’s other records, but from a stylistic standpoint, not much has changed. They are playing in a rather safe mode here, not really trying to do anything revolutionary, but it’s still good.

Roine Stolt has such a beautiful delivery. It’s not so much that he’s a particularly fantastic singer or anything like that. However, he sings with a very sincere swing in his vocals. The first part of the album offers some really standout songs such as The Great Pretender. The song is about finding your way in life. The sound feels straight out of their 1998 classic Stardust We Are. World Gone Crazy is another gem, I love the Zappa feeling this track has. A Million Stars has a warm melody and includes one of Stolt’s smooth and flowing guitar solos. Although it is only six minutes long, Revolution is structured as a progressive epic, with an overture and a verse section that unfolds in a variety of different segments and phases. The ending is magnificent, with Roine accompanied by Hasse on vocals.

Unfortunately the second part of the album doesn’t have such strong songs. It sounds nice and cool, but with very few memorable moments. It feels like they were trying too hard to push a double album again and didn’t have enough material for it. If they had written a shorter album with 1-2 more epics and a few shorter songs between them, things would be very different. By Royal Decree is a fine album on which Roine Stolt and company haven’t done anything particularly new, there’s nothing here that fans of the band haven’t heard before. But at the same time, they looked back to their early years and, by bringing that into the present, they created an album that is musically fresher and more interesting than their three previous albums.

How important The Flower Kings were to the revival of progressive rock in the ’90s and what they’ve given us, especially in their first five albums, is enough to secure them an enviable legacy. However, as standing at such a height in the long run is very difficult, sounding relevant during different eras is merely impossible. The Swedish band had absolutely nothing to prove with By Royal Decree and indeed in the 94 minutes of the album there is nothing new, except maybe some fusion keyboard solos. There would be no problem with that if the compositional level was high and even more so if Roine Stolt’s vocal lines were at least interesting. What stands out once again is of course Roine’s excellent guitar work on a technical and aesthetic level. There are some good (but not great) tracks on the first cd, and unfortunately the second cd doesn’t flatter the band. But even if it was absent, the album would be well-played progressive rock that is far from the essence of progressive music.