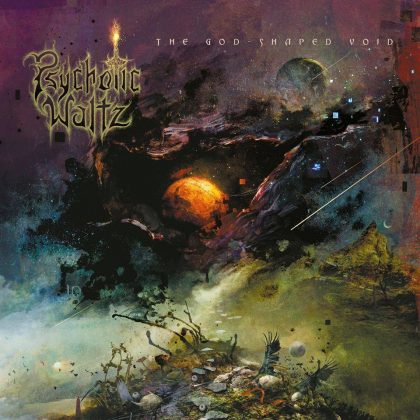 Personally, I’m not the biggest supporter of reunions, especially if many years have passed since the band disbanded. What we have seen time and time again, especially lately, is that the pressure from fans, the nostalgia for past greatness or (mainly) the financial needs of the band members, lead to comebacks that most often dent the legacy of great bands.

Psychotic Waltz is not a random case of a band. No matter how stereotypical or funny this may sound, this statement is absolutely correct in the conscience of anyone that has been connected with the music of this band from San Diego.

This return will reasonably create many doubts. However, 26 years after Bleeding, Brian McAlpin, Dan Rock, Devon Graves, Norm Leggio and Ward Evans are back with The God-Shaped Void.

A triumphant album of a substantial reunion

In such discographic comebacks, when one manages to overcome the obstacle of the nostalgia factor and stays away from what’s popular that now dominates at all levels through social networks, what remains must be given a grand positive mark. And when Psychotic Waltz are the reason for that, a band that left a strong legacy but also gained some sort of reputation after they disbanded, the older listeners of progressive sound already from the release of the first single Devils and Angels felt the “nostalgiometer” pointing in awe of the return. And if the first impressions of the band’s compositional trajectory after such a, multi-year absence were somewhat subdued, the inclusion of the track in the album’s flow is undeniably substantial, and mainly opens paths to enchanting compositions.

Psychotic Waltz returned to continue their ambitious efforts that, then in the underground scene, but at the same time to escape these levels, taking advantage of the new forms of communicating their music. At a time when the dissemination of information takes place at a very short time and annihilates distances, Psychotic Waltz come from the 90’s, rushing with fame as their main weapon, but also their legendary performances after the reunion a decade ago. Throughout this time, the truth is that the progressive sound has experienced great moments of fame with bands that are the centre of attention, while maintaining successful synchronization with the evolution of prog throughout these decades.

Especially in progressive metal, the one-way street of originality and freshness leads the bands away from the quagmire that led influences with copy/paste aesthetics, and Psychotic Waltz continue to make records from where they had stopped with Bleeding. They reduce time distances with their legendary albums and open new paths for a successful new course. So, 23 years later, Psychotic Waltz return with a new album, after their unexpected return on stage. And when you consider the time that has passed since Bleeding, The God-Shaped Void is a triumph for which there will be future space in upcoming tributes to heavy prog.

Throughout the album, the links with the foursome of the albums that charmed us in the 90’s are made on the basis of the synthetic power behind each effort. The guitar duo of Dan Rock and Brian McAlpin bring back the argument about the greatest underground group that culminated and built its own myth during such a musically rich decade. And it is that myth that they’re back to preserve, rekindle, albeit gaining some belated yet righteous fame. Demystified, While the Spiders Spin, Sisters of the Dawn are moments that bridge the gap of absence and transform the experience into greatness. Devon Graves manages to bring back aspects of Buddy Lackey, with his Deadsoul Tribe sting being present, but through a framework of authenticity which connects the whole project with the past. No, he doesn’t reach his explosive performance in A Social Grace, but the voice of Psychotic Waltz delivers with directness and mastery the lyrical mood of the persona that leads the group, with or without the flute.

And when the shocking references to the magic of Into the Everflow meet the directeness of Bleeding, the new era of the great Psychotic Waltz opens up new paths that converge (or diverge…) on the amazing cover. The excellent production highlights the compositions and balances the multidimensional sound. In conclusion, a return that justifies the reunion, with the prospect to become a milestone album and an equal continuity of the four fisrt.

Creating new music with a group that hasn’t entered the studio for 24 years is a great achievement, especially if it sounds fresh. The God-Shaped Void­ is probably what any friend of Psychotic Waltz would like. To be exact, it goes beyond expectation. There is no compositionally mediocre  moment is in these 10 tracks, although among these songs there is not a single absolute masterpiece. The chemistry of Rock – McAlpin is shockingly unchanged, as is Devon Graves’s vocal performance, reminiscent of Deadsoul Tribe’s most glorious moments, but not the 30-year-old Buddy Lackey in Bleeding, which unfortunately is also true for the absence of Lackey’s well-known lyrical depth. Unfortunately, the abstinence of years is apparent in the rhythmic section of Leggio and Evans that removes enough of the adventurous element of Psychotic Waltz music. However, the compositions are clearly well-worked. The God-Shaped Void is a worthy continuation of the myth of a great band that has not been recognized as much as it deserves. Maybe that makes them even bigger. Psychotic Waltz is back, because they have something to say.