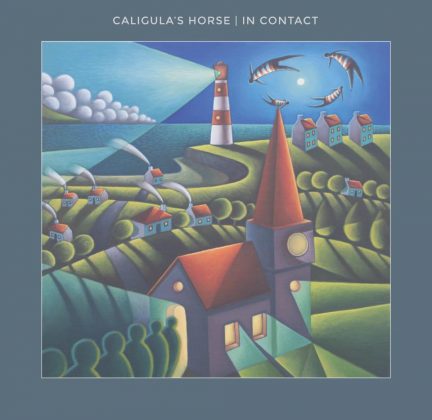 There are bands that remain obscure or are a topic of discussion strictly among their fans, be it because of lack of promotion or because they haven’t come to the audience’s notice. Despite the fact that Caligula’s Horse are part of a rapidly blossoming scene, as the Australian one, and that they have released albums of the highest quality, they remain fairly invisible. The horse of Caligula (it is rumoured that the deranged emperor had appointed his beloved horse as a member of the Senate in 40 BC) is the brainchild of the extremely talented guitarist and composer Sam Vallen who along with the equally capable singer Jim Grey are the core of the band. After three albums with respective changes in the line-up, the band released this year their fourth one. Even though its precursor Bloom was their most accessible record, but not as good as the two previous ones, the expectations were high about the new outing of the Australians.

The concept of the album has to do with the nature of the art, inspiration and creativity, as well as the pressure by the insatiable mob. The whole concept is structured by means of four different stories. The thing is, the nature of art has many and different aspects, so is this creation multifaceted enough to do it justice?

To our pleasure, yes it is. Caligula’s Horse themselves stated that they worked their fingers to the bone until they got it right, a statement that is verified by every single note, every bridge, every wandering on the stave. The maturity in Vallen’s compositions is the lifeforce of In Contact, a force whose point of application is variable and its direction depends on Grey’s timbre. Of course, the work of Cooper and Griffin at the rhythm section, but also Goleby’s to the additional guitar parts fill out emphatically the musical mosaic.

Lyricism flirts with aggressiveness, theatricality (listen to the recitation of the interlude and the Weapon of the Wall) meets melancholy, past gives and takes with modern musical trends. The quiver of Caligula’s Horse contains piercing arrows that pay homage to progressive rock or they whistle to the sound of progressive or not metal, in a drafting course towards the target because jazz structures and references lie around the periphery and some arrows hit there. Naturally, the choices are made depending on the theme of the autonomous stories. To cut a long story short, I’ll tell you about the first narrative out of the four ones. Find out about the rest by listening to this very important album.

The opening story of In Contact has to do with an alcoholic painter whose inspiration comes with a helping hand of his addiction, even though he strives to break away from it. The creativity is depicted by the mystical tone of Dream the Dead while the inner psychological strain generated by his devotees who desire achingly his creations regardless if the cost is the integrity of his soul is expressed through the djent aesthetic of the very powerful Will’s Song. His decision to work on another painting is narrated by the very optimistic and melodious The Hands are the Hardest, a composition that essentially takes one step further the approach of Bloom, the precursor of In Contact, whereas the need for clarity and overcoming the addiction is captured on the sad and at the same time very beautiful Love Conquers All. Likewise, the compositional skills of Caligula’s Horse unfold and they succeed in writing memorable tunes that go into the listener’s head mainly because of the meticulous, but far from trashy commercial work that they have put into the verses and choruses.

Glaring weaknesses are absent in Ιn Contact, the scattered references to their existing back catalogue of the band (Graves reminds of the debut, while the starter Dream of the Dead, as we have already said, reminds of the Bloom-era) are there in order to interconnect all these phases. As a whole, In Contact is a mature statement from the band that they should be held as one of the very few spearheads in the progressive metal firmament. Until the audience collectively catches up with the importance of this work, it will sit easily on the top of my list.

In Contact is the fourth full-length album of Caligula’s Horse and as it seems to be the one that will render them as a reference point of the contemporary progressive metal scene. Vintage prog metal, djent and alternative influences are blended seamlessly. Even though the album as a whole is of high standards, I think that Dream the Dead, Songs for No One and the fifteen-minute Graves (which almost applied me a magnetic force) stand out. The guitars of the extremely talented Sam Vallen and Adrian Goleby are seminal, in particular at the lead parts where they have pulled all the stops. Jim Grey is the ideal vocalist for their material. Technical skills and songmanship balance wonderfully here, which is the desideratum for a prog metal band, but as we all know it is easier said than done. One of the best albums of the progressive metal in the last few years, self-luminous with an identity of its own.