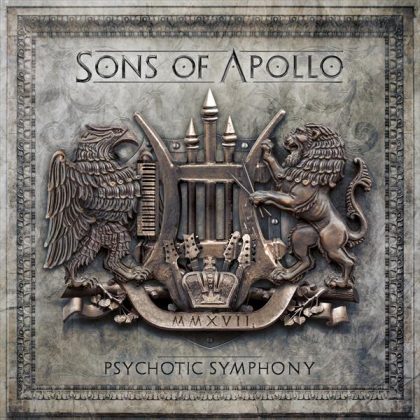 We’ve been missing progressive metal as we got to know it from the legendary Dream Theater albums of the 90s. Sharp guitars, solos, catchy melodies and the agreeable blabbering of the lengthy compositions that nods to the original mentality of the 70s prog. This is what we expected, more or less, from Sons of Apollo since Sherinian and Portnoy were on board, namely the 2/5 of the Dream Theater configuration of Falling into Infinity (and, mainly, of the A Change of Seasons EP). Add to this the fact that their album is released through InsideOut and it was an educated guess that there would be a serious effort to revive this sound. Let’s have a look if they pulled it off with Psychotic Symphony.

One more supergroup came down with a thud

Let’s begin with the vocalist, Jeff Scott Soto. He possesses an unmistakable tone as well as a technique which is interconnected – for good reason – with the melodic rock of a certain kind of music. In Sons of Apollo he picks up where he left off without tweaking his style at all. For instance, on Signs of the Time the chorus that interrupts solos and riffs is so melodic that could be easily included in the new album of Journey whereas it wouldn’t be too far-fetched to call the music before and after it as djent. We had high hopes that the shredder Ron Thal, alias Bumblefoot, would have an extensive presence where he wouldn’t be confined in wearisome solos, but he would mostly zero in on spawning memorable riffs. Naturally, as a worthy session musician, he hasn’t a single composition under his belt as a legacy to any scene. Therefore, frankly, we hadn’t pinned much hope on his performance. On the bass there is Billy Sheehan, the ultimate guest, whom we can let off the hook. No matter where he plays he nails his parts, his presence is crystal clear, showcasing an admirable adaptability, to boot (for instance in Opus Maximum he adds a genuine doom tone that we were unaware it was included in his repertoire).

We saved the duo Portnoy / Sherinian that took care of the production and that seems to be the driving force behind this project for last. There is no question that their technical skills are dazzling, their career is luminous and they still possess the drive to remain active, but let’s face it: artistically speaking, they haven’t taken the slightest risk. For years now they sound all the same, they never opted to go off the beaten track. Therefore, it is natural that their performance on Psychotic Symphony is monolithic and totally harnessed by their insecurity for experimentation. This general feeling weighs on the material, bringing out an outcome that can be classified neither as a “return” nor as a “new musical proposition” (the last one is laughable). Perhaps the most accurate description would be that the whole thing is a digital editing of talents and styles where none made way so as a coherent outcome could be achieved.

There are a few good moments though that we should stress. There is a future only when there is a common goal. For instance on Divine Addiction, a Deep Purple/Rainbow vibe takes up the reins and everyone tunes in. Keyboards and riffs are propped against to what we all already know and we are fond of (keyboards à la Lord and Blackmore-drenched guitars) and therefore the group comes up with a tribute song that sounds very pleasant. But, in general, only but spare good moments are what is left from this album. Plus the fact that yet another supergroup came down with a thud.

Despite the fact that the line-up betokened for something interesting, at worst, I caught myself having low expectations for the album. Truth is that the first single Signs of the Time didn’t exactly help to do otherwise. Psychotic Symphony draws mainly on the 70s and 80s hard rock, adorned with Dream Theater tinges of the Falling into Infinity era when the band goes for technical playing while the distinct voice of Soto brings inevitably to mind his own achievements with Malmsteen and Talisman. At the mid-tempo parts, the influences nod to the Perfect Strangers Deep Purple era. Among all these, some AOR elements are spotted, as well as some interstitial nu dots. No matter how top-notch musicians they are, no matter how accurately the album is performed, the compositions lack quality. Tame, flat, with no reason for existence.

Inside Out Music releases video for Derek Sherinian’s ‘Dragonfly’

Saturday August 15th, 2020 News Comments Off on Inside Out Music releases video for Derek Sherinian’s ‘Dragonfly’