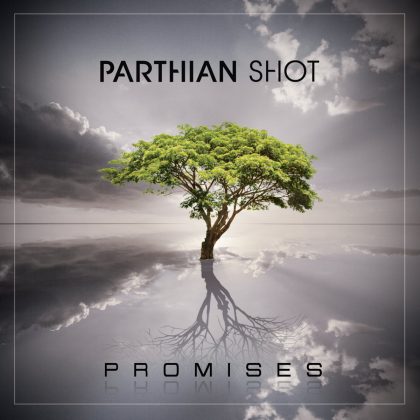 Parthian Shot was formed in Athens in 2003 and after a long run in the underground metal scene, in 2012 they released their self-titled EP. The band’s long-awaited full-length debut was released this January and the years that have passed until it came to light seem to have worked only in favor of the band.

Progressive metal may have changed in recent years, but Parthian Shot’s music bridges the glorious past of the sound with the more alternative style from the 90s to the present. Promises is a reasonably ambitious start of a band that deserves the attention of every prog metal fan.

One of the most promising Greek progressive metal acts finally released their long-awaited debut entitled Promises. The album contains nine songs and more than 70 minutes of music. Drawing from a wide range of metal, prog rock, alt rock and various other influences, their mix of guitar driven melodies, dynamic keyboards, and complex music structures created this very exciting sound on this album.

From the get-go, on the epic album opener Promises it is pretty obvious that these are top musicians with a lot of imagination and creativity. So many tempo and mood changes, acoustic guitar parts, great vocals and remarkable emotional guitar solos, places this song among the most interesting on the record. The second track Prey has the potential to become a hit, at least in the underground. In the beginning of the song I didn’t like it that much, but as the song went on I got more and more into it, especially because of the vocals and the arrangements. The band demonstrates fantastic use of twin vocal harmonies and the background effects to reach climax already in pre-chorus and that feel continues to flow till the end. Overcast is probably the heaviest piece on the album, with great energetic guitar riffs, nice bass line as well as the powerful and clever drumming. Jaded is perhaps my favorite song on Promises. This is a mid tempo ballad crafted in 90’s nostalgic prog metal style, it has beautiful clean guitar sound mixed with the sophisticated keyboards, which takes the role of the dominant instrument in some parts. George Prokopiou of Poem and Mother of Millions makes a guest appearance in For Me which gives a special charm to this song. The last track, Guilty of a Dream, is a great progressive song, and another example of the band’s ability to create many memorable moments in 10 minute pieces.

Overall, the second part of the album is very melodic, but somehow seems to lose some of the emotional intensity which reached a peak in the first part. Anyways, the mood that Parthian Shot are able to produce with each track is undoubtedly impressive and I am really satisfied with the individual attention they paid to each song. The album is prog and of course does have noticeable progressive elements, but I think the way the songs are written will really attract people who like different styles of heavy music in general.

Promises is not a perfect album, but it’s a very enjoyable and a really adventurous journey. It’s obvious that the band worked very hard and passionately to reach the final result. It will be very interesting to see how they will evolve in the future.

There seems to be a revival of the progressive metal element in Greece so the new release of Parthian shot is a major event. The importance of this is confirmed by the music content of Promises. Tight, well-structured and perfectly executed prog metal which sounds contemporary with heavy riffs and dynamic sound, but at the same time does not lose its lyricism and is guided by the metal sound of the last 20 years. I was especially impressed by the verses in songs like Prey and Devil’s Kiss, which impress and are memorable. Guitar-wise, there is a wide range of solo performances that are brilliantly accompanied by keys (e.g. in Guilty of a Dream) and are the driving force behind this fine-tuned engine backed by a decent rhythm section. The voice of Panagiotis Papageorgiou does not lack in quality compared to other singers of the genre, and though the Greek accent is quite prominent, it still blends well with the music of Parthian Shot. As the title unintentionally suggests, Promises is indeed a promising album and a very solid listening experience that deserves your attention, though it is not groundbreaking.

The first full-length album of Parthian Shot to be released