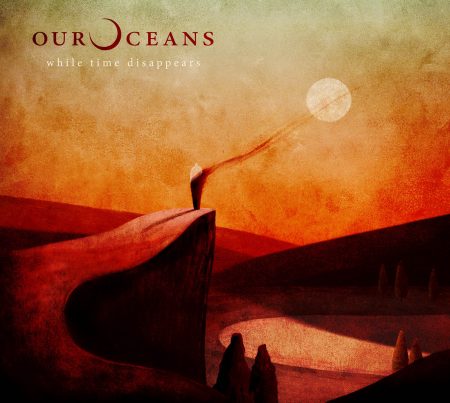 Our Oceans is probably the second best progressive rock / metal band with the word Ocean in its name and this is probably not a big achievement. But what the Dutch band can be proud of is that they have released two very remarkable albums, with their release this year being an important step forward in their career. And if all that doesn’t interest you, let’s say the band’s main man is Tymon Kruidenier, one of the two guitarists in Cynic’s masterpiece Traced in Air (alongside Paul Masvidal of course). The line-up also includes Robin Zielhorst (ex-Cynic, Exivious) on bass, and Yuma van Eekelen on drums.

While Time Disappears comes to heal the wounds that opened during the year for the progressive metal scene. The death of Sean Malone and Sean Reinert, two of the most important musicians of the genre and members of Cynic, left a vacuum which will be hard to fill. The music you will find in the nine songs of the album includes part of Cynic’s magic from 2008 onwards. Next to the creepy melodies reminiscent of the best moments of Pain of Salvation, you will find short metal guitar outbursts that add intensity to key moments, while the excellent technical drum passages and guitar solos follow a completely minimalist approach so that the atmosphere does not break the atmosphere. Obviously we are dealing with a complete artistic proposal that may be loved by listeners of various tastes. Without projecting the progressive character, I believe that the directness of the melodies included in each song can attract the interest of those who listen to post-rock, prog, psych, heavy, indie rock and even electronic music, since e.g. Your Night, My Dawn is a small trip hop masterpiece.

In an attempt to pick highlights, I realized how many good compositions are included here. Let me just mention the Kruidenier’s unique performance in The Heart’s Whisper, which reminded me of the late Jeff Buckley at first, but eventually the Dutchman went even further with his screams. Equally shocking is Yuma van Eekelen’s drumming in Motherly Flame, who without playing showing off, remains so well timed that you are left wondering if it is a drum machine (I hope not). The final song of the album is where things really escalate. The bass in With Hands Torn Open is you want to hear from rock musicians in the year 2020, who consider themselves playing progressive music. A sonic pandemonium for a few minutes was enough to erase anything similar by established artists who released an album in 2020. Obviously I am talking about Fates Warning, Psychotic Waltz and Pain of Salvation who released equally remarkable records, but in no case better than the 50 minutes in White Time Disappears.

The debut of Our Oceans was honest but “safe”. In the five years that have passed since then, however, things have changed and the band returns electrically renewed, as evidenced by the extroverted Unravel that opens the album.

While Time Disappears is haunted by the spirit and approach of Jeff Buckley’s songwriting. The singer’s voice and the vocal melodies refer directly to him. The guitar melodies sometimes exude a feeling of melancholy and sometimes a raw electrified rage, even in the same song. However, while there is a sense of jazz abstract melodies created by some jamming, the album offers us a few moments of technical outbursts and solos that bring something of the paranoia of Mars Volta. And here comes the amazing rhythm section that when given the opportunity in the fast-paced parts screams its great role in the flow of the album.

Our Oceans seem to be making their way out of today’s atmospheric prog rock sound, influenced by Jeff Buckley, but without overshadowing their high technical potential. An excellent alt-prog album, in which nostalgic melancholy is simply a hidden expression of rage.