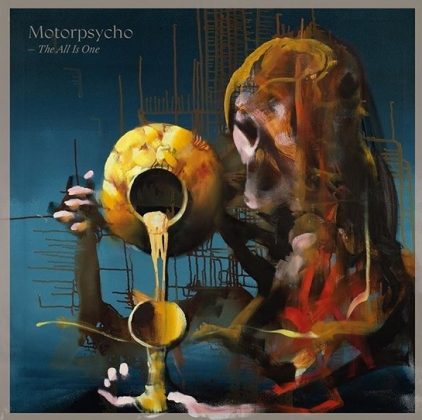 The legendary Motorpsycho have been building an enviable discography since 1990, without taking a single break, and they’ve changed the style of their music several times. For over 10 years they have invested mainly in progressive rock and the results are so impressive that they justifiably surprise even their most loyal followers.

This year’s double album The All Is One is the final part of the “Gullvåg Trilogy”, in which Bent Sæther, Hans Magnus Ryan and Tomas Järmyr were helped significantly by three great musicians: Reine Fiske (Dungen, The Amazing, Träd, Gräs och Stenar), Lars Horntveth (Jaga Jazzist, Amgala Temple), and Ola Kvernberg (Grand General, Ola Kvernberg Trio, Trondheim Jazz Orchestra). After two masterpieces, The Tower (2017) and The Crucible (2019), the Norwegian pioneers return with an 85-minute album (like The Tower), exceeding all expectations, while the bar is already set very, very high…

Reliability, quality and consistency over time

The Norwegian masters, Motorpsycho, are back again impressing with their well-known successful recipe. Without any mood for rest, their course has apparently designated them as a band of unique quality with a leading role in the modern progressive movement, ambassadors of a tradition, of which they themselves are one of the most important representatives.

The Norwegians, who are going through a period of prolonged form, continue on the paths they started to follow with the fantastic The Tower and The Crucible, closing the album trilogy entitled “Gullvåg Trilogy”. Håkon Gullvåg’s covers for these albums were, among other things, a source of inspiration for the compositions. Those who are aware of Motorpsycho’s music in almost thirty years, but especially with their albums during the last decade, know their importance and contribution to contemporary progressive music. With releases that touch perfection, they revolve around the axis of unstoppable creativity that leads them to new paths and finally remain at the top, enriching the music of the 21st century. One could argue that Motorpsycho is the most important band in the broad space of progressive sound, as long as one listens to what preceded The All Is One.

If The Tower and The Crucible are two albums that complement each other and are two undeniably amazing masterpieces, the third part is a continuation, and an attempt to develop the compositional and performing quests of Motorpsycho. With the help of Reine Fiske, but also strings and percussion, Motorpsycho creates an acrobatic effect between garage pop-rock structure in smaller compositions and “traditional” prog-meets-jazz-meets-folk mix, especially regarding the 42-minute epic in the middle of the album, entitled N.O.X. ∞. It may be an attempt to incorporate all those elements that make Motorpsycho unique, to offer an ambitious composition that tries to balance their irresistible ability to search and discover new soundscapes. Therefore, with such a composition starring in the middle of the album, Motorpsycho are essentially offering two albums in one.

Thus, from the epic mood left by the 42-minute N.O.X. ∞, the return to simpler forms, shorter durations and a lighter atmosphere, offers the balance that an 85-minute album needs, perhaps with a somewhat uneven distribution in the dynamics of the compositions, but with the result justifying them. From the early Beatles in the quietest moments, to the colorful improvisations, the sound of the mellotron, the groovy guitars and the “classic” Motorpsycho moments like The Same Old Rock.

Of course it’s an album that will enrich any record collection, that of a Motorpsycho fan or someone who listens to the band’s music for the first time. Truth is the album offers a complete package that transforms the thirty years of existence of the Norwegians into 85 minutes, but also shows new paths in their creative course. There are more traditional forms in eight compositions, but also experimentation and jazz passages, cinematic and atmospheric direction with pure Norwegian prog know-how in N.O.X. ∞. Motorpsycho continues to impress, evolve, and offers albums that prove the band is at the highest point of creativity. One only has to listen to the The Tower and The Crucible that preceded to realize the magnitude of their influence. A really huge band.

Håkon Gullvåg’s beautiful painting in the cover of The All Is One reminds us of the connection of Motorpsycho’s new album with their two previous records, although there are clear differences, at least structurally, especially the 43-minute N.O.X. ∞, the longest and most ambitious track in the band’s career to date.

The instrumentation, the production and the performance of the musicians are perfect from start to finish. It is obvious that all the songs are thoroughly worked to the last detail, while Sæther’s vocals are probably better than ever. The album features some amazing compositions, such as The Same Old Rock (One Must Imagine Sisyphus Happy), The Magpie, Like Chrome, and several parts of N.O.X. ∞, which could be somewhat or much shorter, although it is obvious that the band invested in its unparelleled energy and the groove it exudes when these guys jam. There are no mediocre moments on this Motorpsycho album. Even if The Tower and The Crucible are better albums overall, The All Is One is an album you ’ll listen to over and over again to discover its well-hidden secrets.