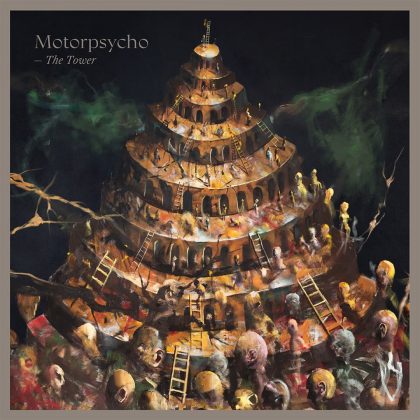 Standing in the zone that divides mainsteam and underground may work for you if you handle it astutely. All these years, Motorpsycho have written material that, on paper, appeals to a relatively wide audience, without being stressed or obligated to do so with commercial success as their goal. This freedom is the main reason why they keep going for 26 years since their debut album releasing not only just as good albums, but they are at top form, from Black Hole/Blank Canvas until the most recent The Tower.

When progressive and rock really unite

The main change that took place in The Tower is the replacement of the drummer. This is not to say that Tomas Järmyr is better than the amazing in his own right Kenneth Kapstad. Yet, the fact that he is from the get-go in the pocket with Sæther’s bass takes the groove, that runs anyway in the band’s blood, to the next level; a groove that owes a lot to Black Sabbath who are the record’s main influence, if we have to name one.

Their style is pretty much the same that the Norwegians have accustomed us to. Hypergroovy heavy rock psychedelic-like that never wears the listener out (what the average stoner band strives for), while never dropping along the way its progressive-rock slant. This is their great strength: probably no album in the progressive history has ever sounded that rock. There are Pink Floyd touches of course as well as a big part of the American psychedelic tradition. The subtle addition of psychedelia is the reason why so meticulously crafted songs are far from sounding sterilized or academic.

The recording took place in Los Angeles which adds to this American “air” that dominates the album and explains this extra merciless groove. This time, the only guest is the Chilean Alain Johannes, a very talented musician and producer who has gained a lot of experience by participating in countless albums, most notably on the sublime Songs for the Deaf of QOTSA. His vocals on A.S.F.E., the album hit, are evident of this, while his contribution on the guitar parts is far but negligent. “There is a song for everyone and a singer for every song” he sings in the chorus of A.S.F.E. and this is the mentality of Motorpsycho. Never in their career could someone classify their vocals as world-class and maybe this is the reason why they never became mainstream. Yet their vocal melodies had always been well-crafted and instantly recognizable that distinguished them. On The Tower they seem to have topped themselves in this field. Nevertheless, the biggest surprise that the Norwegians had in store in The Tower is the addition of the keyboards. Without any extra musician, Sæther and Magnus Ryan share the keyboard duties and the outcome is compelling. The economic playing and the well-chosen sounds give the compositions a leg up while in some cases, like the spacey ending of Ship of Fools, take the lead in a stunning way. If there will ever be a seminar about the usage of keyboards in rock music, then this album must be in the syllabus.

With regard to the compositions, The Tower touches perfection. A filler-free double album, deprived of a single average moment. Even the acoustic breaks Stardust and The Maypole are marvelous. Aside the aforementioned A.S.F.E. and Ship of Fools, In Every Dream Home catches the attention because it is transmogrified temporarily from an absolute groovy tune to a psych / prog elegy thanks to the flute. The starter The Tower sets the ball rolling in a typical Motorpsycho way while Bartok of the Universe pays tribute to Black Sabbath where an excellent solo features.  In Intrepid Explorer they test for the first time more experimental waters while the mild A Pacific Sonata is a progressive rock anthem.

It seems that the air of LA worked wonders for our Norwegian friends. The Tower is the antithesis of a musical tower of Babel. In the tower of Motorpsycho all the tribes and species communicate perfectly with each other, creating a musical mosaic that every seasoned listener should pay attention to. In my opinion, it is the best thing they have done since The Death Defying Unicorn. While we absorb it, it may make it to the top of their discography. Twenty-six years after their debut, by the way…

In The Tower next to purely acoustic moments co-exist mainly lengthy compositions (the average duration exceeds nine minutes) where heavy rock blends ideally with psychedelic and progressive rock. Only A.S.F.E. is totally different than the rest of the songs, a straightforward rock tune. At times, the riffs are heavier than ever, while there is a constant interchange of rhythms and moods throughout the songs. In the adventurous world of The Tower, a flute or mellotron part may follow a heavy riff, creating sounds of extraordinary beauty. In addition, the new drummer, Tomas Järmyr, is already an active member, leaving his mark on the final outcome. They are one of the best bands out there right now and this is an album that may end as a fulcrum in their long career. One of the best albums of the year.
Highlights (or should I say personal favourites): A Pacific Sonata, In Every Dream Home and Ship of Fools.