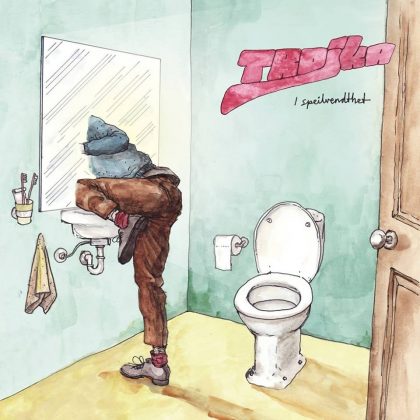 As their name implies, Tojka from Bergen, Norway, is a trio comprised of Gjert Hermansen (vocals, drums), August Riise (vocals, keyboards) and Simon Kverneng (vocals, bass). I Speilvendthet is the band’s first full-length album released earlier this year by Tik Records. The three musicians state that they play progpop and just a few seconds of their music are enough to be fully confirmed. But surprises only start when the play button is pushed…

Τhe progpoppest of them all?

Prog + Pop = Sant (or real, true), as the norwegian trio from Bergen declares. Is the combination real, true or feasible though? I know a statement as such would make certain prog aficionados blush with despise, but come to think of it, prog used to be pop right? There was an era when Yes, Genesis, King Crimson or Rush were playing sold-out arenas. Pink Floyd were shaping a whole generation. Or wait, all this is still true here. All of these bands still play sold-out arenas while boasting excessive selling numbers with every release. And who among us may suggest that bands as diverse and mass-appealing as the Beatles or Radiohead haven’t been expanding on their pop sensibilities? Who may argue against say Pet Sounds as “…not being prog enough”? On the other hand, what is labeled as prog isn’t necessarily forward-looking and risk-taking. Many an artist have felt so secure in their bubble as to keep putting out what shall not disappoint their fan base. Prog is, at least to me, the tendency to incrementally or radically evolve from one’s standards as well as the desire to create something (that is perceived as) new. And to the extent that artists would like their product to be accepted at some level, their music is pop-oriented by definition.

I hated the album. I hated what seemed to be an obnoxious attempt to conjoin the late 70s / early 80s sound of bands like Yes, Genesis, Gentle Giant and ELP and even add ELO and Asia to the mix: “Eww is that cheesy sympho-prog designed to serve as a Jackie Chan movie OST?” But for some reason I never shelved it and so I kept listening to it much to my displeasure. I soon began to realize that the album is a multitude of references starting with the bands above and always transitioning to and fro certain farfisa-driven italiano prog moments and Canterbury-bound soundscapes (Hatfield and the North anyone?). In some weird circumstance, every time I felt I had too much, the album progressed unexpectedly, taking some daring undercuts and sophisticated turns. Every time I was out, they pulled me back in. See what happened there? I went from cheesy to sophisticated in a matter of minutes. There’s something with this statement of an album. On top it went, I played it over and over again.

I loved the album. For what is basically a trio, Trojka create music that serves the song as an end unto itself. As such, don’t expect any masturbatory interludes or flamboyant solos to yawn you to infinity. The purpose here is one and one only: to dance you to death as your lord meant you to, although it will sometimes feel awkward. What may start off as a ballad can end up as a Crimson-inspired anthem in synths. The groove is prevalent throughout and you really get the vibe that it was recorded organically as the execution is certainly not-too-perfect and allows for a degree of clumsy. Gjert Hermansen on drums, August Riise on keyboards and Simon Kverneng on bass have indeed assembled a strong core functioning uniquely.

The transition from AOR verses to arena rock riffs to quirky latin jazz fusion polyrhythmic intervals clearly shows a tongue-in-cheek approach, one’s gotta admire that. I didn’t particularly like the lead vocals, but I find the way the band is harmonizing to be genial. All three members sing and so possibly do their guests which stands for some variety that to me is always welcome. I wish Njål Paulsberg’s crystal clear production was less flat out, but maybe this serves the punchy bass lines right, especially when this is combined with the somewhat loose (as in not tight) drum sound. And err.. what about the guitar? Some will miss that, I can take it or leave it. Apart from an acoustic guitar, the rest of the 6-strings were deemed redundant. Instead, the album’s sound palette is complemented with cello, viola, violin, vibes, (quite possibly) flugelhorn as well as flute (played by Pernille Boye Ahlgren) and the more prominent saxophone (handled by none other than Benjamin Mekki Widerøe of Seven Impale fame).

Overall, this is a very enjoyable output that absolutely deserves more attention. It clearly shows the level of care taken to get this out there, and it is certainly not an easy album, don’t be mistaken by its wrap. I believe it’s a pebble of progress, in that it clearly evolves forth from its influences and sports multi-layered sensibilities. If my norwegian is any good, the topics in their lyrics range from humoristic to existential, but I guess I must have missed some context. I think people will not be put off by the fact that Trojka sing in norwegian as it is a very beautiful and singing language and it definitely serves the music. On their previous EP titled “Menn fra Jorden” they had a track called Keiserne av Progpop (The Emperors of Progpop). I wish that for them with all my heart. Til neste farvel or until the next goodbye.

The debut of Trojka is a perfect example of the wealth of progressive music. What amazes at each consecutive hearing is different from the previous one. Initially, the pop element develops in an unprecedented prog environment, but retains an inherently compositional character. Then, the “provocatively” 80s synths, the ease of the jazz-fusion injections, the brilliant orchestration with the guitar almost entirely absent but not missing, the groove that emerges even from the most atmospheric or busy parts, the vintage spirit which oozes freshness instead of nostalgia… You could add a lot more. Even the not so great vocals are brought forth through the wonderful vocal melodies. The most important of all, perhaps, is that Trojka have a compositional and stylistic mark with only indirect references to their influences. A rare debut in every respect. Listening to it makes you love prog music effortlessly.