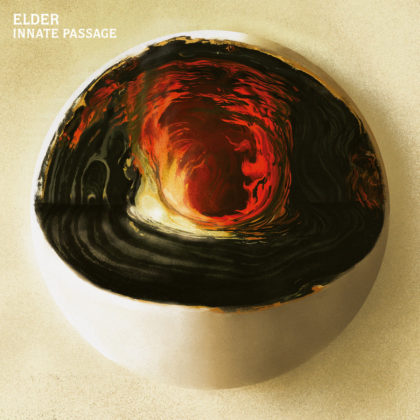 The evolution of Elder’s sound unites two seemingly opposite worlds. The band from Massachusetts started out playing psychedelic / doom / stoner rock on both their self-titled debut (2009) and their follow-up Dead Roots Stirring (2011). The big shift in their sound took place on Lore (2015), the band’s first album released by Stickman Records, where their heavy psychedelic sound was infused with many progressive elements. The ultimate balance of all their elements took place in their next and most likely best album to date, Reflections of a Floating World (2017). The band’s momentum seemed to be somewhat lost with the highly ambitious Omens (2020), and Elder’s next step finds Nick DiSalvo’s band ready to live up to the high expectations of their fans.

First off, I have to admit that their previous album Omens was one of my biggest musical disappointments of 2020, so I patiently waited for the next step of this Massachusetts-formed (and now Berlin-based) quartet. Elder’s sixth album Innate Passage continues their odyssey away from their stoner doom roots, but darkness is still there in the background.

Innate Passage is quite daring and adventurous, and is much more in the prog direction but they still find spots to mix in with some heaviness amid the journey that each track takes you on. This album successfully transports you to its own world so you can lay back and experience whatever it throws at you. Elder has always sounded like themselves, and this album follows suit. It took me a while for Innate Passage to click compared to earlier Elder albums, but eventually song by song it won me over. In usual Elder fashion, the album is five songs long, all between nine and 14 minutes long. Elder’s creativity would have no place in short songs, there are always enough ideas for grandiose pieces and while the five tracks on the album are epic in length and aspiration, they also share the same restless energy. Sometimes thoughtful, sometimes euphoric, all songs like to change the mood from time to time. There’s always something going on. The best example for these description is the opener Catastasis which becomes more and more complex over the entire running time of almost eleven minutes, first gaining in heaviness before drifting back into spherical soundscapes.

The biggest improvement compared to the previous work is in the terms of vocals to the point of saying that they are the best on any Elder release to date. Cleaner and with less echo, DiSalvo’s harmonious, high-pitched voice is a key element of Innate Passage‘s signature graceful power. Still, the greatest values in Elder’s music are interesting riffs, solos, and playing with the sound. The guitar tone is extremely seductive at moments and the riffs are well written. The bass does a great job and the drumming is on point. The spacey keys are splendid and bring to mind early 70s Yes.

My favorite trackMerged in Dreams – Ne Plus Ultraproves that not everything has to sound the same. With dreamy and spacey synths, the song first takes the path towards krautrock, until a riff breaks the silence and the song suddenly drives in a completely different direction. In conclusion, despite the fact that it does not reach the same height as Reflections of a Floating World, Innate Passage is a great return. The guys are truly an accomplished group of musicians and I’m sure they will continue to push the boundaries further. For now, I hope there be another EP in the vein of Reflections… in a break before the next full-length album.

Elder have long since decided to leave their intense stoner origins behind. On their sixth album they travel within the psychedelic ocean as it was mapped in the 60s and 70s. Since their first albums, their name grew rapidly, with a heavy spark igniting their progressive edifice, and they do the same today. Moving closer to the sound of Mondo Drag and similar bands, they bring the golden sound of psychedelia to the present with a heavier sound, which finally sounds only like Elder. Innate Passage consists of long compositions that allow the band to experiment, to build sound colors that after a few listens stick tp your mind. The heavy riffs are present and with them the guitar and keyboard melodies that compete with each other in quality. A subtle sense of repetition of their past does not detract from the fact that this is one of the best releases of 2022.