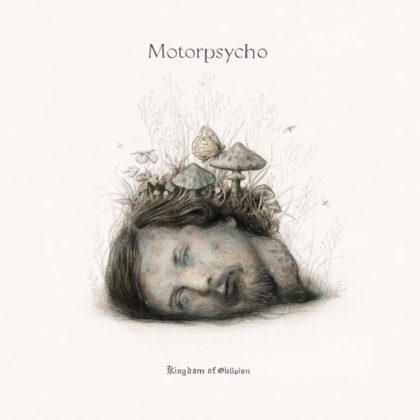 There’s no need to talk about the consistency with which Motorpsycho releases really good music. Their discography is now part of Norway’s cultural heritage and is divided into several periods. Their period they are going through at the moment seems to have started with the addition of drummer Tomas Jarmyr to the band’s line-up. The Tower, The Crucible and The All Is One were the pieces of a single narrative, in which their progressive rock increasingly embraces its rock base. Elements of Black Sabbath, King Crimson and Pink Floyd are combined through the Norwegians’ music, who have the experience and deep knowledge to fully assimilate them and at the same time present a 100% Motorpsycho result. The paradox is the youthful urge with which they compose and perform, after 30 or so years of existence. Kingdom of Oblivion adds another 70 minutes of music to the mosaic of sounds that the legends from Trondheim have given us so far.

A new, different album by the Norwegian masters, in the shadow of the recent trilogy

Unstoppable. This is the best way to characterize the Norwegians, who seem to continue being fearless and without any intention to cut speed, in a course that impresses and with each step offers a high quality album in the modern European rock scene. And perhaps, one would expect that after the Gullvåg trilogy (i.e. two double and a single album in three years!) Motorpsycho would choose to take a break, at least for a while, to reorganize and then continue to surprise us.

However, they do not seem willing to slow down and thus they returned with a new album, yet another epic of the kind that Motorpsycho themselves know how to compose, with their own high demands finding once again the ground to unfold and meet the excessive ambitions that have flourished for thirty years now. Thus, Kingdom of Oblivion comes after an inconceivable series of records and follows another direction, closer to that of Heavy Metal Fruit and especially Little Lucid Moments, giving a new freshness to the more progressive quests of the Norwegians.

The difference that the listener will perceive from the very first listening of Kingdom of Oblivion is the focus on the riffs and the return to heavy rock paths, which develop and guide the compositions. The tireless core of Bent Sæther and Hand Magnus Ryan moves away from the psychedelic, cinematic explorations and tracks like The United Debased or the album opener The Waning (Pt. 1 & 2) clearly leave the mark of this guitar driven effort. And as always, they do it in a flawless way that after listening to the album again and again offers new elements that hide in those labyrinthine passages. This is achieved either through the distinctive keys or the classical / folkish references that act as intermediate stations of their familiar heavy prog sound.

Apart from that, the album flows with a familiar, unpretentious, liberating flow, with some more mediocre moments joining the larger compositions, of which The Transmutation of Cosmoctopus Lurker is the song when the album peaks, another top Motorpsycho track of their thirty-year career. All in all, the intermediate acoustic, semi-acoustic and folk detours may distract Kingdom of Oblivion from its guitar dynamics and 70’s prog rock touches, but it seems that like in the previous albums they add variety.

Kingdom of Oblivion is another striking addition to the discography of Motorpsycho, an album that keeps that informal leading position for the band that has earned the respect of rock fans, as a leading modern band that never compromised on its way to greatness, but it is also an album that seems to be carried away by the grandeur of what preceded it. A great album, which sounds better and better after each listening experience, but the Gullvåg trilogy had set the bar too high.

Kingdom of Oblivion continues what Motorpsycho did on their previous three albums with a few minor differences. This time progressive rock remains in the background of the compositions, with heavy psychedelic rock coming to the forefront much more in most of the tracks. 70 minutes is a lot and fortunately Motorpsycho, although they have shaped their own style, always remain diverse through their exceptional songwriting skills. The tracks vary in duration, but also in their “moods” and although there are some weaker points, the highlights are the ones that only these Norwegians can create. A very typical example is The Transmutation of Cosmoctopus Lurker, one of the best songs in the history of the band. I think it no longer makes sense to compare the album with their previous releases. What matters is that once again Motorpsycho have managed to capture the quintessence of rock music and offer it to us.

Details on the upcoming album of Motorpsycho