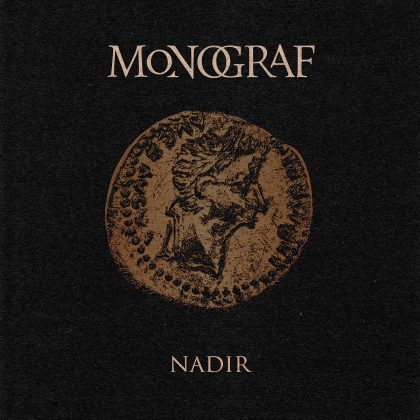 The quintet of Monograf was formed in Oslo, Norway and Nadir is their first album that was composed with the help of five guest musicians. The band states that their biggest influences are Grails, Godspeed You Black Emperor, Nils Økland, A Silver Mt Zion, The Mars Volta and Midlake and this unconventional (to say the least) combination is gaining our attention.

How much attention does the “post-rock sprinkled with Norwegian folk” sound of Monograf deserve? The contemporary scene of Norway never ceases to amaze.

The Norwegian band Monograf released their first work entitled Nadir after a four year process of composing and recording. Except the five basic members of the band, the album includes some guest musicians with the more interesting being the ones in mellotron and in the Hammond organ. An ancient coin depicting Caesar is shown on the album cover, and it fits with the overall concept of the album that deals with their thoughts on the use of money and greed and the sadness that it has a result.

The nine minute starter Grails is an excellent post rock composition that steps on the basic “nostalgic” style of the genre, incorporates the violin as a mainspring instrument that with the male/female vocals create a beautiful dipole. The title could be interpreted as an indirect homage to one of their biggest influences, Grails. In this track, they use a controversial phrase that is attributed to Jesus: Render therefore unto Caesar the things which are Caesar’s and unto God the things that are God’s.

The self-titled track that follows, seems like a dialogue between the heartbreaking vocals and the violin. The vocals stop to let the violin being accompanied by the acoustic guitar, say its own sad story and vice-versa. The folk element dominates here.

The Goldn Calf returns to the more post rock style, but right at the point where more instrumental rhythms are “demanded”, Monograf are using simple but passionate vocals. The strong guitars create beautiful melodies, while a pleasant surprise is the work on the drums with the strong beats giving a more aggressive aspect that fits the composition, but also fits the anger and futility that results from the lyrical concept.

Intermission slows down, and returns to the fold element that works as a prototype of the fifteen minute long Horde that shows all things Monograf. A courageous band, that dares to experiment starting from post rock, grafted with great doses of fold and under the veil of an art-rock style.

Some further influences other than Grails must be mentioned. And that’s definitely Godspeed you! Black Emperor, Midlake (especially from Courage of Others) and Sigur Rós. In contrast with these bands their sound isn’t as polished. The dreary production prevents them from having a clear sound, from the other hand though, it creates a claustrophobic feeling, an image of a dark age from centuries ago. The album will close with a chilling cover of a Norwegian song / melody, Ned I vester soli glader. It is essentially a small prayer, a small thank you to god.

Monograf, are not a simple case of a post rock band that creates beautiful melodies that could work as a background music for the listener. Nadir doesn’t contest for the listeners attention, but it demands it effortlessly through the imposing atmosphere, the primal beauty and the pure melancholy. I don’t hope, but I would like for Monograf to be given the attention they deserve.

It is impossible to overlook what’s been happening in Norway in recent years. It could be compared with the outbursts of bands from Sweden some years ago when different bands would appear from nowhere and surprise us. The new quintet of Monograf, sets out to a haunting melancholic folk with art, prog and post-rock levels. It’s a work that is head and shoulders from the entrenched musical stereotypes, it is settled and in instances it’s inspired. Other than the conventional rock instruments, nyckelharpa, a traditional swedish instrument, is providing an edge as well as the fiddle (both related to the violin), that gives a gloomy and enticing atmosphere. However, as a collection, two out of the five compositions of the album needed more work. Nonetheless,  the first effort of the Norwegians is very considerable with three out of the five tracks bringing shivers to the listener. The starting Grails, and the melancholic folk concise songs Nadir and Intermission. Even though it isn’t a masterpiece, Nadir stands out from the volley of releases that floods the market for years now.

Håkon Oftung (Elds Mark): “In Norway, with so many artists making such good music, it’s difficult to be heard”