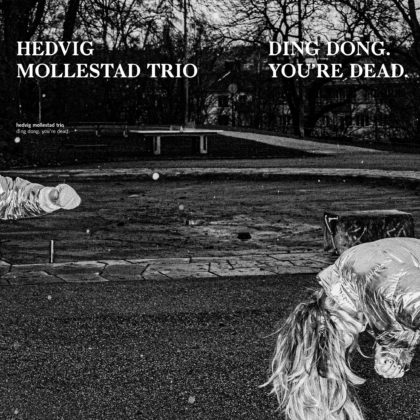 The sixth studio album of Hedvig Mollestad Trio is released 10 years after the band’s debut, Shoot!. Looking back at the band’s career so far, one could say that a unique combination of different sounds is their main characteristic. This mix of jazz-rock and hard rock with a bold jamming directness that adds sharpness and aggression, sounding borderline post-metal in a genuine jazz fusion environment, is nothing but common. This sound seemed to mature from record to record and take on an increasingly complete form, culminating so far in 2018’s Smells Funny.

But what has changed in these three years? The answer is that Ekhidna was released last year, Mollestad’s first solo album, which raised the bar very high and went far beyond the style of her trio, openly flirting with prog with a rich instrumentation. That was more than enough to make Ding Dong listen. You’re Dead. even more interesting.

Mollestad is known for her ability to mix rock with jazz in a unique way that a priori rejects any stereotypical expression by retrieving the primordial elements of both worlds, resulting in a sound that still cannot be described as vintage. This happens, not only because the charismatic guitarist invests in the timeless characteristics and energy of both rock and jazz, but also because this playing would be impossible without much of what happened after the ’70s (including metal and stoner rock). Although the term jazz-rock seems safe, it is not enough to describe the sound of the trio, especially in this case. The references to fusion, progressive rock, early heavy metal and free jazz are more intense than ever, while the psychedelic rock and avant-garde covers are key parts of the overall result.

In this multidiverse environment, Mollestad’s catchy riffs and unpredictable adventurous developments bear the signature of one of the most important guitarists of modern times. Her substantial and mature playing is very rare, as is this seemingly magical way in which she recalls some of the most beautiful elements of several great guitarists. Her style sounds like an adorable meeting point between Jeff Beck, Robert Fripp, Frank Zappa, John McLaughlin, Jimi Hendrix, Terje Rypdal, Hans Magnus Ryan, Dick Dale and many many more, maintaining her own identity that is now rightfully placed beside the aforementioned names.

What obviously differentiates Ding Dong. You’re Dead. from the band’s previous records is that Ellen Brekken’s inspirational bass lines have a clearly more central role, especially in the explosive Leo Flash ‘Return to the Underworld and the Zappa-esque psych jazz Magic Moshroom which are her own compositions, as well as in the wonderful groovy The Art of Being Jon Balkovitch. The same goes for the vivid, heavy, syncopated drumming of Ivar Loe Bjørnstad who demonstrates the full range of his abilities. The live feel of the music is not unprecedented for the band, but it impresses, especially considering the difficult period we experience with the limitations of the pandemic, which is referred to here (in the galloping and direct All Flights Cancelled). The striking chemistry of the three musicians could not be achieved from a distance. The three musicians recorded together over a period of three months and the result justified them, to say the least.

If someone has not heard a single note from the album, he/she will have already wondered if there is anything negative in Ding Dong. You’re Dead. The truth is that not everything is perfect, and I think it would be almost impossible to be. As this is – at least in part – an experimental album, it is inevitable that the approach sounds – in part – “difficult” and indigestible, especially when dressed in that (beloved) Norwegian darkness (e.g. in the title track and the wonderfully different Four Candles which closes the album). In any case, a purely instrumental album with no commercial intent is fatally aimed at a part of the rock and jazz worlds, but on the other hand this album is equally appealing to both audiences. Aesthetically, the bar is at a very high level and this is in any case a great victory for the band, especially when Mollestad is at the peak of her creativity and maturity. Based on the band’s ever-increasing progress to date, it would make perfect sense for the Hedvig Mollestad Trio’s next album to be even better.

Although there is no album of Hedvig Mollestad Trio that is not at least interesting, there was always a feeling that the specific format of the three musicians somewhat confined the obvious and undisputed talent of the Norwegian guitarist. This was proved in Mollestad’s amazing debut album, Ekhidna, and as a triumphant she returns to the trio format to reach new heights. In Ding Dong. You’re Dead. her guitar really goes wild and both her companions (Ellen Brekken – bass, Ivar Loe Bjørnstad – drums) cannot but follow, being better than ever. The jazz-rock they present in these seven compositions stands with both feet in 2021. It’s really hard to find such groove and intensity in a record with such a strong jazz character. The distance between Hendrix and modern stoner rock is covered very easily by the band, without ever relaxing the album’s “cranky” jazz mood. Mollestad changes her  guitar themes magnificently and the shocking way she develops them, make her a real “painter” of their instrument. The compositions themselves are tighter than ever and fully justify the Trio, although of course the lack of more instruments and players somewhat limits the sound, especially compared to Ekhidna. The only thing for sure is that with these two albums, Mollestad now belongs to the elite.

Elephant9 – Arrival of the New Elders