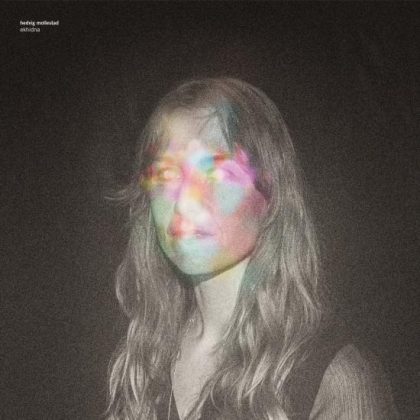 Since 2011, Hedvig Mollestad Thomassen has released five studio and one live album with the trio bearing her name. Let’s first attempt to describe her style using a few arbitrary terms, and then forget about it: Mahavishnu Sabbath Trio, Fusion Zeppelin, Doom Swing, Jazz Fuzz. One can go on, but you get the gist: heavy-pounding, relentless riffs, raw, hard-hitting grooves, twisted melodies, fiery soloing and extended chords. All albums are knit around a common red thread, there’s continuity and definitely a Mollestad identity.

Ekhidna is Mollestad’s first solo album, the first not with her trio that is, and the only thing that’s certain is that it will be discussed a lot or rather it should be discussed a lot for all the reasons analyzed below… and then some…

One of the most intense statements of 2020

Ekhidna is both a part of as well as a departure from Mollestad’s identity. For starters, there’s a sextet on record (and they don’t share any members with the trio, save for Mollestad). Second, there’s no bass guitar but two keyboards that are masterfully handled by Marte Eberson (COKKO, ex-Highasakite) and Erlend Slettevoll (Espen Rud, Grand General, Jørgen Mathisen’s Instant Light and The Core). At this point, I should note that it’s my thesis, that, when you have two keyboard players and no ordinary stringed bass, you should definitely have 2 drummers too, and voila! There goes Torstein Lofthus (Elephant9, Shining, Eivind Aarset, Mumpbeak, Red Kite and frankly, many more) and Ole Mofjell (The Big Yes!, COKKO and Emmeluth’s Amoeba), with the latter taking care of the percussion set. Then there’s Mollestad and, who’s missing? Oh yeah, Susana Santos Silva (Mats Gustafsson’s NU-Ensemble, Lama, Fire Orchestra and many collabs within the free jazz realm) on trumpet. It aready looks promising from the liner notes. 6 adventurous musicians of the modern Norwegian and European music scene, some more experienced than others, yet everyone eager and explosive.

The project came to life thanks to the Tingingsverket commission (and was marketed as such) while it was first presented live at the Vossajazz festival in Norway on April 13, 2019, with Jon Balke on keys (replaced on record by Slettevoll). Shortly after, the original version was taking its final, concrete form at the Amper Tone studio in Oslo.

As mentioned before, while the album does carry the Mollestad stamp, it presents us with a new direction in her music. Pretty reasonable, as writing for a diverse sextet, should come with new challenges. Mollestad’s guitar remains as fierce as usual, but with a gentler undertone. Kicking it off with the short opener “No friends but the mountains” we are facing Silva warning us over keyboard layers, Mollestad’s sparse chords and possibly percussion. The drums begin to take their prominent role with the heavy hitters A Stone’s Throw and Antilone both cases of Mollestad’s riffmastery, full of smart interchanges and polyrhythmic and odd polymetric notions respectively, albeit so subtle that they groove hard. The trumpet has solidified itself within the compositions, as well as an improvisational voice (Silva is, indeed, one of the keenest improvisers of our generation). Of course, the low end is as rich as ever, with the keybass providing a rather eerier tone than we are used to, while all the players take turns with soloing impressively through flows of tension and ebbs of release. Side B starts off with the Slightly Lighter guitar ballad, with Mollestad showcasing magnificent tone and beautiful progressions, to lead us into Ekhidna, which is definitely my favorite of the pack. At times it sounds like an impromptu jam where everyone covers for everyone while the main riff and melody are just WOW! Cool interplay between drums, percussion and the trumpet, which nods at the 70s fusion greats. One Leaf Left closes the album with what sounds like a prog rock ballad slowly leading to a fuzzed out crescendo, with the guitar and keys setting the tone. And then it’s over.

Half snake, half human, all Hedvig. What a trip this has been! Ekhidna is arguably one of the most intense statements of 2020, both in terms of musicianship and songwriting. There’s no more points to be made here, just go for it and play it loud, as it deserves.

Although this is an instrumental album, my initial question was: why Ekhidna? The double nature of the mythological figure may correspond to the balance of three women and three men in the line-up, but in any case the result is simply amazing. The magnificent instrumentation is the perfect environment for Mollestad’s guitar genius to unfold, in a frame that’s grander, more epic, more adventurous, more interactive, and certainly more narrative than ever before. Hedvig does everything (again): she launches her heavy riffs, she builds her inconceivable solos, she enchants with her charming glissandos, but this time everything is more effective and dazzling than ever.