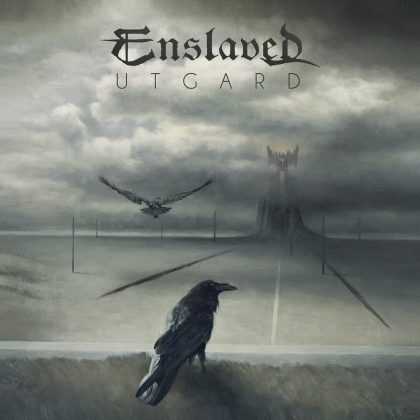 The career of Enslaved so far is an ideal way to see the course of black metal over the years. Initially influenced by the explosion of the new genre in the ‘90s, they followed the wave of their time to forge their sound. But then they chose a path free of stereotypes and wanted to explore the limits of black metal and many times even overcome them.

To this day, the band does not stop looking for new paths and their current vision brings them further and further away from their starting point. Utgard is their new album and the confirmation of all the above.

Walking the line between the past and the future

The new album by Enslaved finds the band playing in a style that has been consolidated for a long time and is none other than progressive metal. Even though black metal remains an expectedly important ingredient, it does not exhaust their sound which is based on technique and melody. In Utgard, however, we witness changes that present some new elements. Their sound is more melodic here and perhaps, seemingly, easier to access than in the recent past.

The main difference from their previous album, E (our reviews here), is that the tracks are smaller and their structure, although faithful to the progressive genre, follows a different way of expression. In Jettegryta (the first official video off the album) we detect the thread with the past which demonstrates the way the band has sculpted an almost unique style, especially in terms of its technical expression.

Urjotun, the other official video off the new album, presents the other face of the band mentioned above. An almost Killing Joke-ish introduction leads us to an extremely rhythmic continuity that remains undiminished until the end. Here the band discovers another path towards the renewal of ’80s sounds that provide fertile ground for music to sound even fresher.

Some of the new elements that enrich their music are the increasingly courageous use of the acoustic guitar, but also references from krautrock to new wave. Enslaved are looking for ways to present music that is not stagnant but awake, looking for new stimuli.

On the contrary, Flight of Thought and Memory, comes from the band’s deep past. It is a fast black metal piece that as it evolves releases something epic from within and closes in an unexpected soundtrack-ish kinda way. But that does not change the band’s goals in a new direction, wanting to give more space to melody, the clear vocals, the light psychedelia, and also to songs that are not limited to a technical performance.

Utgard, however, is not entirely as successful. The songs do not cause the same feeling of pleasure and it seems that the changes need their time to mature by the band itself. Besides, the classic features of the band that have been embedded after years may not be able to amaze us today. It is understandable why the band is looking for something new, but desire is not always a sufficient ingredient to actually make it happen.

Going through the third decade of its existence, the band seems to faithful to its refusal to remain stuck in its successful style. Utgard is not good enough to be included in the best albums of the year. It is a step that walks the line between the past and the future and is not convincing enough. Still, it’s a good release from an extremely important band. We expect more from Enslaved. Hence the rating.

This is the sixteenth full-length album of the great Enslaved. I think that the compositional ease of the Norwegians between pagan, viking, black metal, and prog rock is unprecedented. And if they still seem to have settled into a style (100% their own), it is the small new touches that are scattered and the – once again – excellent songwriting that will impress the listener. Ivar Bjørnson seems tireless and is once again the indestructible machine for the production of compositions to which his precious and valuable companions give flesh and blood. Amazing lead and rhythm guitars, elaborate rhythm section and instrumentations are exactly in the ideal spot and the result is an album with a black metal soul and an unquestionable progressive aura. Enslaved are the undisputed leaders of the extreme prog sound and their consistency can only be compared to a metal band from a different music planet. Their name? Fates Warning.