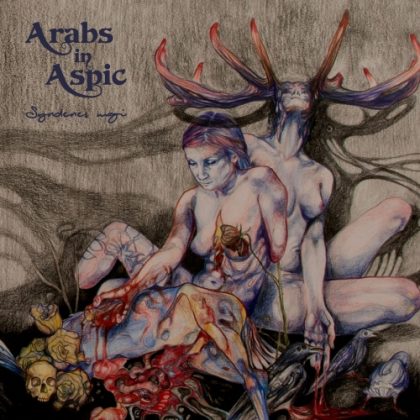 The associations that spring to mind when first becoming aware of the monicker Arabs in Aspic are, on the one hand, obviously expected but on the other hand they are somewhat misleading. You got yourself wondering if you are going to engage yourself in something worthy or if it is yet another band that ladles on their gratitude to their inspirers. The first band that comes effortlessly to mind is the one that composed the unsurpassed Larks’ Tongues in Aspic. Whether you are a potential listener of the Norwegians or you have already lived the experience thirteen years ago when in the broader underground progressive circles the release of this album was much expected, the early thoughts are engulfed by reservations, fearing that the aura of King Crimson would overshadow everything personal and unique in its way, until the disc is inserted into the player and some of the aforementioned thoughts are partially verified.

The crowning achievement of their discography

The mastermind of the Norwegians is the guitarist / vocalist Jostein Smeby and the band, excluding their debut album, is a quartet with the same members for seven years now. We should also mention that they have released albums under both names Arabs in Aspic and Arabs in Aspic II (the affix “II” was added due to the departure of their bass player Terje Nyhus). They went back to Arabs in Aspic when they were signed by the Italian label Black Widow Records just before the release of their third album. So here is their new, fifth album entitled Syndenes Magi. Even though I am positively unqualified to translate anything pertained to the Scandinavian languages, Arabs glorify sin since the title, after a rudimentary research, refers to the “Magic of Sin”. Τhe cover of the album incarnates surreally this magic, continuing the streak of sleeves of deductive retro aesthetic from their first album onwards.

The first interesting thing that the Norwegians bring to table through their new album lies in the language that the lyrics are written. Arabs went for their native language to sing their new tunes. This fact reminded me of the tradition of the giants Høst and Trettioåriga Kriget but sonically-wise they are totally unparalleled. To spot similarities, we should not only inspect the ground where the legendary bands of the 70s were activated, but also we should check out more contemporary bands that based their sound on the abundant usage of Hammond. The Norwegians had always been flirting with the high priests of prog, namely King Crimson (John Wetton era), Deep Purple (MK II), the Italians Wicked Minds and occasionally with the doomy power tower of Black Sabbath. Simultaneously, some 60s psychedelic rock aspects are manifest in their style, as well as Hammond-driven legendary bands like Atomic Rooster and Bodkin. These bands, some of them to a greater extent, delineate the sound and style of the Norwegians.

The album consists of three compositions only, the title-track and the sequels of Mørket, Mørket 2 and Mørket 3, off the amazing Strange Frame of Mind album. The first out of thethree begins rhythmically in a jazzy note, with the bass and the keyboards taking the leading role. A heavy guitar riff worthy of the Robert Fripp school follows up, whereas the polyphonies recall David Byron and generally fragments of Uriah Heep are dotted in the compositions. The guitar solo that interjects sends a chill down the spine while the aura of the early and mid-era of Pink Floyd is prominent and intense quite often in the album. The starter is encouraging as-it-gets but the best is yet to come. The duo of Mørket is what perfects the canvas of the Norwegians. The first part begins with τον Stig Jørgensen (keyboards) on the helm, carrying the spirit of Richard Wright. The chorus is simply amazing and the rest of the composition certifies the uniqueness and the experience of Arabs in Aspic. They have the gift to conceal their influences having absorbed them in a totally convincing way. The next and final song starts off in a relaxed and ambient pace until it is transmuted into a heavy prog riveting piece, where shades of Pink Floyd, Uriah Heep and Deep Purple are marching. My sole objection is that they have gone way beyond the natural life of the song which should be trimmed down to 10-12 minutes by eliminating the ineffective interjection of the sound effects. After this almost 7-minute punctuation, the song comes back to the normal way it started.

To sum up, Arabs in Aspic offered a vintage heavy prog gem and it should be arguably held as the most accomplished album of their career. In spite of the lengthy compositions, the tunes are mature with very specific goals and direction. We invest on their quality and we are grateful to them.

Arabs in Aspic are a very honest case of a band which is knee-deep into the 1970s. In their fifth studio album, they sound better than ever, offering us one of the best albums we are about to listen this year. The three lengthy compositions of the album do not wear the listener out in the least, since the adventurous prog development is spot-on and, mainly, the themes and the melodies in there are inspired. Their psychedelic side surfaces, too, best exemplified after the middle section of Mørket 3, whereas things get occasionally heavier or nod to King Crimson (for instance the intro of Syndenes Magi). The lyrics are written in the Norwegian language and therefore add a Scandinavian dimension to the final outcome, but unfortunately the vocals are rather average and not as remarkable as they were intended to sound. Of course, this is the only glaring drawback of a very strong in every other way album.