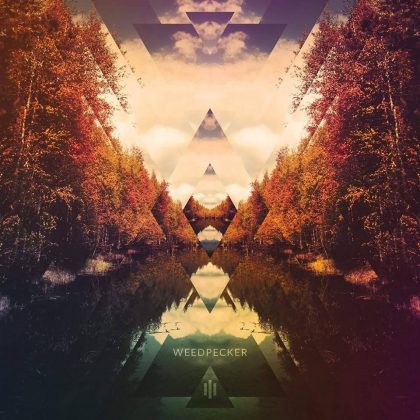 Weedpecker is a psych / stoner / space rock quartet from Warsaw that began recording in 2012 with self-titled EP, their self-titled debut album in 2013, and continued with their second album two years after that. Their signing with a new record company found them ready for the big step. Stickman records is known as the company responsible for the releases of Motorpsycho since 1994, as well as albums of 35007, and more recently Elder.

Those who had known Weedpecker from their first steps were probably ready for what surprised all others in this year’s III.

I was lucky to get in touch with Weedpecker from their first album in 2013, and my original impression (which btw has not changed since then) was that they were easily distinguishable from the vast mass of contemporary stoner bands that are overestimated for no reason. In Weedpecker’s music the psychedelic element is truly existent, clear, and absolutely successful, while the grunge element matched perfectly. The next album II was similar to their debut, but the band’s development was relatively small.

III was released by Stickman Records this year, and the changes in Weedpecker’s sound are impressive. The symmetrical cover of Maciej Kamuda gains the first aesthetic impressions mainly due to the colors, making it an ideal pretext for the audio content of the album. Indeed, their atmospheric psychedelia reigns again, but the stoner element retreats in favor of adventurous structures, and playing that points to the free and explosive spirit of Motorpsycho, the heaviness of Elder (both on Stickman) and the melodic riffing of Mastodon of course, who are also the main influential of Elder. It is obvious that the ethereal psych / space atmosphere blends perfectly with the band’s most technical play. The guitars and voices of the Wyro and Bartek Dobry brothers are more closely related than ever, in rhythm, lead or atmospheric themes that make every listening a new, rich experience. However, the mvp in this explosive ensemble is Grzegorz “Mroku” Pawlowski, who gives groove and depth with his bass, sometimes being a third guitar player alongside Dobry, while his collaboration with drummer Robert Kułakowski (aka Pan Falon) is simply impressive.

Weedpecker’s achievements do not end there. Their turn towards more progressive fields finds them in their most inspired phase. There is no uninteresting point among the five tracks of the album, but there are moments that are easily memorable. The opener Molecule is the ideal introduction, incorporating all the elements of Weedpecker, and finishing in a great psych / space outburst. Embrace is probably the best song of the band to date combining technical play, rich melodies and a mind blowing mid part. From Mars to Mercury, the longest track of the band to date, with its great, thick riff, evolves into a proggy psychic epic. Liquid Sky (another amazing opening riff here) highlights the wonderful structure of the songs is with its enchanting orchestral plot, while Lazy Boy and the Temple of Wonders is the grooviest moment of the album, closing III ideally.

If there is a disadvantage in this beautiful album this is not something that first appeared in III. The vocals of the Dobry brothers are always twin, always ethereal on beautiful but safe melodies, and it seems as if they are hiding, although they have an identity, and match their style. In any case, Weedpecker’s third album is a triumph for the band, and a great achievement that is the result of work and endless jamming. Widening  the band’s sound is justified by the technical abilities of all four, and despite their high level, they themselves convince us that they can do even better in the future. The essence of the compositions, and the absolutely successful structure of their tracks stand out from a huge set of modern psychedelic bands. The easy atmosphere and the imitation of style, groove, and hard riffs is never enough, because ultimately the truth (or the absence of it) is what counts. Motorpsycho are old teachers of that, Elder are younger examples and Mastodon is the greatest band on the planet partly because of this element. The truth of Weedpecker’s music is inevitable, fortunately for them, and for us.

With their third studio work, the Polish with the terrific name seem to be moving away from stoner rock, diving deeper into space-rock, and psychedelic waters. They seem able to manage this change of style perfectly, given their excellent executive skills. Beyond the technical part, Weedpecker have all that’s required to convincingly deliver its psychedelic vision. The five compositions are long and diverse. They manage to balance the delicate line between jamming and composition by combining a permanent psychedelic euphoric puff with several great autonomous moments of melody. III is recommended to all lovers of the genre, and especially to those who operate with more selectivity within the vast ocean of new releases.