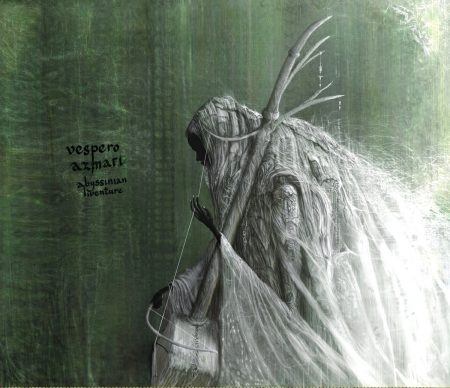 They left us with great expectations after By the Waters of Tomorrow [2010], which were confirmed with Droga [2013]. Last year we were amazed by Fitful Slumber until 5 A.M. and only a few months after that they left us speechless with the consistency of this year’s Lique Mekwas. Vespero is not just the best band ever from Russia, but also a creative machine that seems gigantic when on stage. Azmari: Abyssinian Liventure, recorded at The Union of Theatre Artists of Astrakhan on May 15th 2015 is but a simple confirmation.

Space Ritual of the Caspian

Focusing on the evolution of Vespero makes it easy to perceive their uniqueness within the contemporary progressive and psychedelic scene. A uniqueness that, apart from the distinctive sound and the mark they have made in space rock, is reinforced by their origin and their geographical isolation.

With Azmari: Abyssinian Liventure Vespero make clear that they can convey the quality of their studio albums on stage, which is quite reasonable if we take into account the improvisational nature of their music. The six-member band (plus Pavel Alekseev on sax) is in top form and their bond seems to stem from a spiritual connection between the members which cannot be simply mastered after many rehearsals. With an excess of comfort they manage to perform convincingly the most psychedelic parts while their playing abilities during fusion moments is breathtaking.

The songs were chosen mainly from Lique Mekwas and Droga [2013], creating the aforementioned contrast between the fusion character of the first and the more psychedelic of the second. The unreleased Shum-Shir sounds more like a piece omitted at the last moment from Lique Mekwas. The only taste from old material is given by the wonderful Tall Tree from By the Waters of Tomorrow [2010]. The lack of further older material may disappoint some, but they can find comfort in the previous five live albums released by Vespero.

It is a shame that such a unique band has never toured extensively. Of course this may add even more points to their particularity. Until they eventually come to Greece or we travel to Astrakhan, we will be satisfied by listening to Azmari: Abyssinian Liventure, i.e. Space Ritual of the Caspian Sea.

The truth is that there are not too many contemporary bands I would love to see live. What is certain is that Vespero are among the top bands in that list and the proof lies in the amazing Azmari: Abyssinian Liventure, which is a wild space – prog festival, with material from this year’s Lique Mekwas and Droga [2013] plus Tall Tree from By the Waters of Tomorrow [2010] and unreleased Shum-shir. Jamming energy, technical skills, awesome psychedelic atmosphere and unrivaled groove (especially in tracks from Lique Mekwas) coexist and enchant everyone through the incredible bond of Vespero. After listening to Azmari: Abyssinian Liventure it is simply impossible to not want to see them live.