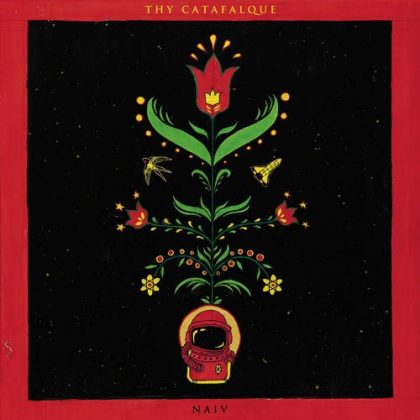 Naïve is the art created by those who have not waded into its norms and therefore have not received the appropriate knowledge required by professional artists. It is the art which is motivated by passion that overpowers technical knowledge and without anchoring it or confining it in the shapes of other relevant works. The ninth Thy Catafalque album, entilted Naiv, can be classified according to the previous description.

The band consists of one member who consists its core up to this year’s ninth album. After first being introduced to the black metal industry, on which his first albums focused, Tamás Kátai gradually incorporated many and heterogeneous influences into his music and innevitably set his metal origins well behind the limelight. The special characteristics of the music of Thy Catafalque include the preference in the native Hungarian language.

Naiv‘s content finds the band in the sound that has been crystallized after the previous releases. The surprising element in terms of alternating styles in each track has now become a norm; there is no central idea to undercut the philosophy of Thy Catafalque beyond that. And as strange as it may sound, that’s why I can’t classify them among the so-called avant-garde artists. The avant-garde concept etymologically indicates the vanguard, those who march in uncharted waters to explore them by offering their conclusions to the others. I cannot claim that the same is happening with the music of Thy Catafalque. I would say that it is in fact a form of progressive music, the general characteristics of which have long been known.

Naiv begins heavily but also melodicly at the same time with A bolyongás ideje, its guitar introduction is followed by female vocals and emphasis is given on keyboards, with small vocal and guitar outbursts. Tsitsushka is clearly more interesting. Its first notes (especially on bass) exude new wave memories of Joy Division and a gothic Fields of Nephilim style aesthetic. As the track evolves, it becomes more addictive and the wind instruments at the end are superb.

Embersólyom (which is also the first official video off the album) presents the traditional Hungarian through the bands’ prism. Here we see the quality of the band: how much they can give a modern stamp to the music of the past with respect to its original identity. The final result justifies them, the melodies of the song are easily memorable and clearly belong among the best of the album. The strings in the fairly short Számtalan színek give continuity in the previous until A valóság kazamatái fundamentally transforms the sound into industrial. And yet the folk style is not lost here either and giving an unexpected character to this dynamic track.

Kék madáragain uses tradition once again as an introduction to an electronic new age track reminiscent of Jean Michel Jarre and Vangelis. By the way, I think it’s my favorite on the album. Napút comes next and it is a pretty nice song, which may belong to the most conventional of the album. In At Vető we have another piece that focuses mainly on electronic music with consistent, yet hard guitars and the ubiquitous traditional influences on female vocals. Szélvész, the last track, moves in a similar direction until it turns into the hardest track on the record, reminiscent of Leprous (The Congregation era) with black metal vocals.

When the album comes to its end, it leaves you the impression that Thy Catafalque have once again been consistent with the high standards they have set. Naiv is the proof that progressive music can be heard today following a less tried-and-tested path. Those who know Thy Catafalque can expect another good record.

Tamás Kátai is definitely a very interesting guy and Thy Catafalque is a very special case of music group. From its cover onwards, Naiv predisposes you to something very special. Surely, such a folk approach seems unprecedented. Something like a Soviet cosmonaut landing in a Hungarian village. The Hungarian folk melodies are the clear protagonist of the album (along with the voice of Martina Veronika Horváth), given through a completely space version of progressive or avant-garde metal that Kátai has become accustomed to over the years. In order to do this, it minimizes the black metal origins and dives into genres such as 70s progressive electronic and avant-prog, and as he has an excess of talent to give the final result a tremendous flow and homogeneity. Despite their eclectic nature, the tracks are not at all obscure, as the aforementioned folk melodies successfully attract the listener. Naiv is one of the top Kátai and Thy Catafalque albums and a typical example of a metal album that breaks the boundaries of the genre.