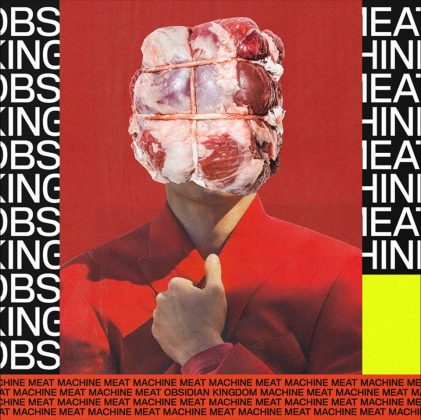 The Spaniards Obsidian Kingdom released their self-funded debut Mantis in 2012, a mix of prog and post-rock / metal, five years after they were formed. Next year’s Torn & Burnt contained industrial / electronic remixes of tracks from their first album and in 2016 they signed with Season of Mist, with the very good A Year with No summer where they returned to a heavier approach to the sound of their debut album.

This year’s Meat Machine finds the Catalan band ready to achieve international recognition, and without a doubt this is the most ambitious step in their career to date.

Different prog metal (and not just that)

I can only imagine the big surprise it will bring to the listeners who knew Obsidian Kingdom before Meat Machine, with the first screams and the solid metal guitar riffing. Apart from the raw energy it generously gives us however, The Edge alternates the sounds and the mood with the presence of female vocals.

The Pump and Meat Star that have been selected as the album’s singles and videos, a proof of how much their record company believes in them, are two heavy tracks that stand somewhere between Neurosis and Mastodon, the whole groove of the album is impossible not to remind the latter.

In Mr Pan the nu metal elements are quite reminiscent of the respective bands from the early 00’s. The amazing Naked Politics is a melodic composition that has something of that emotional uplift exuded by some of the classic compositions of Deftones and A Perfect Circle. No doubt, this is the most alternative moment of the album.

But things are quite complex. It is not only the fantastic vocal performances that overflow with passion and expressiveness and are the best thing in Meat Machine. All the musicians shine through the production that allows the songs to highlight the technical skills of the band members. From the melodic guitar solos to the solid rhythm section and the keys / synths that have a leading role. The mastering has been carried out by Magnus Lindberg, who is also a member of the Swedish Cult of Luna, also a band of Season of Mist.

To be honest, the Mediterranean origin of the band made me wonder if the English pronunciation would be good enough, but truth is the performance is perfect.

Flesh World stands out, due to the great ethereal and alternative female vocals, with the eerie music referring to Chelsea Wolfe’s sludgiest elements.

Spanker and Vogue are two compositions that flirt with the electronic element, exude something from a more technical version of Nine Inch Nails, and both are remarkable.

The Voivod style in the riffing of Womb of Fire is combined with electronic elements to bring calm before A Foe, a song with only female vocals which closes a truly great album.

If all the progressive mood and the energy of Obsidian Kingdom, their ability to create compact and memorable songs without sacrificing musicality and technique are incarnated on stage, then they are doomed to leave the underground scene and be heard by a really large audience. Maybe it’s just a matter of time.

The Spaniards Obsdian Kingdom manage to combine a number of different influences in their own way in their fourth album. In Meat Machine we hear elements of Mastodon, Neurosis, and even Nine Inch Nails. This is metal music that meets industrial and alternative rock. There are also Deftones influences on the vocals, especially when they are not extreme, but we must also note the existence of a female voice which adds another component that complicates any attempt for genre categorization. Meat Machine is a mosaic where the talent of its creators provides coherence. It can jump from heavy edges to more melodic moments, it has some complex parts and embraces a more digestible sound elsewhere. It has a unique breath that guides the band to a fairly original set of songs. On this record I can find a connection with some special bands of the past (especially ‘90s bands) that changed the way we listen to modern metal. Meat Machine may not be that great, but it brings boldness in a genre that is now familiar with “weirdness”.