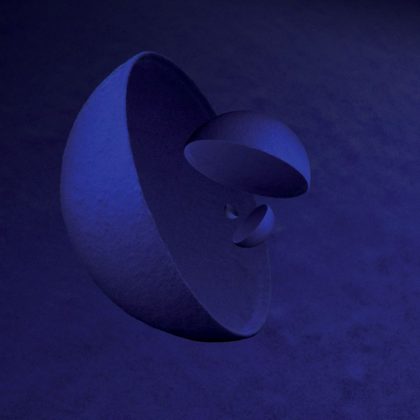 Loss as a counterweight to inspiration and creation

The purple color characterizes the aesthetics of Through the Hollow: introspection, mystery, spirituality, but also an ambiguous side of mourning, which oscillates in the background, sometimes with redemption and sometimes with depression.

Titles like Get Out from Under (referring for obvious reasons to Your Way Down by Selim Lemouchi & His Enemies), Death is and The Devil Lives are directly related to Selim’s personality, his metaphysical obsessions and to some extent The Devil’s Blood. We deeply understand the need for a redemptive artistic expression to converse with their beloved Selim. This interactivity, although not characterized by originality, gives birth to extremely interesting ideas.

The substantially extended Through the Hollow is an arrhythmic and unorthodox psychedelic prog masterpiece, at least half of it. It starts on a minor scale to be accelerated later with the help of Farida’s passionate performance. The track has an eclectic psychedelic melodiousness, pure delight. Get Out from Under has a heavy pace with a lot of The Devil’s Blood’s aura. The same goes for The Maze of Stagnant Time, with the singer referring to her past as Selim’s companion. The second long track, Formless Hands, has the most jamming character. It’s something between vintage and psychedelic rock, and another song that confirms the nand’s quality. Corpse of Mind intensifies the dark psychedelic style of the album. In essence, it is embarking on an illusory ritual tempo with Farida making sure that the listener participates in it.

I Am No Longer stands out for its beautiful solos (which are generally few, but fuul of emotion) and its excellent scaling, while the five-minute Death is, in addition to being one of the highlights of the album (along with Through the Hollow and The Devil Lives), is the tightest track with a late 60’s – early 70’s aesthetics, where everyone gives their best performance. The rhythm section and the keys are dedicated to a flawless rhythmic prog / jazz character. The stimuli from Matthijs Stronks’s studies in jazz piano techniques give a subtle influence from this genre. Tunnel further intensifies the abysmal atmosphere, as if orchestrated to lure you into a dark, enclosed environment, but doesn’t really offer something.

The addictive The Devil Lives echoes the music of The Devil’s Blood, and flirts with the lyrical occult spiritualism of Selim’s compositions. Farida’s passion overflows here too. How does it feel / Now that your body is gone, addresses a rhetorical question to her brother. The shamanic performer, free from the sexy seduction that her voice radiates, as well as from her nickname (Mouth of Satan), articulates her laments very clearly in a way that further emphasizes the vast mystery.

Molassess is not another version of The Devil’s Blood. Through the Hollow is not based on traditional motifs, i.e. verse – chorus, but emphasizes the unconventionality with the addictive darkness. and the multidimensional expressiveness with the Dionysian melodicity. The first hearings may be discouraging, so it takes time to detect every detail, as the compositions are very thoroughly worked. Molassess do not discover gunpowder nor do they regress in the darkness which inspires them. Instead, they deliver a stunning album that sums up a musician’s love for art.

After the disbandment of the Dutch occult rockers The Devil’s Blood in 2013 and the tragic death of their leader, Selim Lemouchi, a year later, no one expected that we would witness their natural continuation after so long. Because that is exactly what Molassess are, who consist of four ex-members of Devil’s Blood (including their vocalist Farida Lemouchi) and released their debut album this year, Through the Hollow. Remaining thematically and lyrically evil and satanic enough, musically they partially distance themselves from the more direct style of the past by focusing more on the complex structures by openly flirting with the progressive rock sound. Of course, their basis is still occult heavy rock with influences from Coven, Black Widow and Black Sabbath, while they also use darker atmospheres, bringing to even the great Goblins mind in songs such as Corpse of Mind and Tunnel. Get Out From Under and Formless Hands are the most representative compositions of the style they seek to achieve: evil melodies, catchy vocals and a very good songwriting level. The epic eleven-minute title track with its evocative and – most importantly – convincing atmosphere could be a guide for the future sound of Molassess, in order to experiment and dare even more.

Monday August 17th, 2020 News Comments Off on Molassess release video for ‘Death Is’ from forthcoming album ‘Through the Hollow’