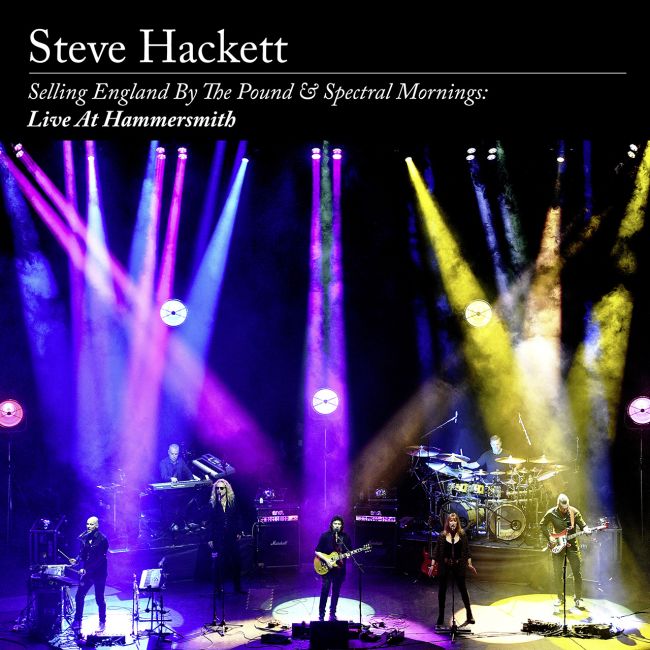 Steve Hackett announced the release of Selling England By The Pound & Spectral Mornings: Live At Hammersmith later this year. The 21-track album will launch on September 25 through InsideOut Music on 2CD/DVD, 2CD/Blu-ray and on a limited edition 4LP/2CD box set and 2CD/DVD/Blu-ray with art book.

The London performance was captured during the former Genesis guitarist’s 2019 tour, where he was joined onstage by his touring band: vocalist Nad Sylvan, keyboardist Roger King, bassist Jonas Reingold, drummer Craig Blundell and Rob Townsend on saxophone and flute. The lineup was bolstered by special guests John Hackett and Amanda Lehmann.

Hackett says: “Amalgamating three personal favourite albums, including the whole of Selling England By The Pound, most of Spectral Mornings and At The Edge Of Light, highlights was a very special live experience. Both audio and visual on this product give a mind blowing experience of an unforgettable evening at Hammersmith. It’s great to have a special live show available in these challenging times.”

The Blu-ray format will also feature a 30-minute documentary about the tour. Watch the video for Deja Vu:

CD1
1. Intro
2. Every Day
3. Under The Eye of The Sun
4. Fallen Walls And Pedestals
5. Beasts Of Our Time
6. The Virgin And The Gypsy
7. Tigermoth
8. Spectral Mornings
9. The Red Flower Of Tai Chi Blooms Everywhere
10. Clocks – Angel of Mons
11. Dancing With The Moonlit Knight
12. I Know What I Like (In Your Wardrobe)