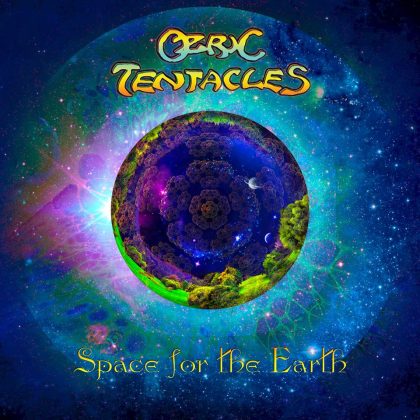 Novelty, experimentation, radicality, inspiration. These and even more descriptions are not enough to describe the musical heritage of the great Ozric Tentacles. The result of a highly productive period such as the underground late 80s where mixtures of sounds from many different musical genres brought back the psych / prog / space sound to the colorful 90s, the sonic spaceship of leader Ed Wynne and his companions traveled through four decades leaving an enviable legacy behind. From the beginning and the tapes era (1983-1989), they managed to pique the interest of the listeners by filtering their influences fromPink Floyd, Gong, and Hawkwind. But it was from 1989 to 2000 that their career took off with legendary albums such as Pungent Effulgent, Erpland, Strangeitude, and Jurassic Shift. Their previous album (Technicians of the Sacred) easily entered both our 2015 top-20 list and my personal top-10, proving that they can still do it.

A great addition to the Ozric pantheon

The lockdown has many disadvantages, but also some advantages. Just over a year after the solo album by frontman Ed Wynne, Ozric Tentacles, the legendary psychedelic space rock band from the UK, released their new album titled Space for the Earth. Ed found inspiration for the album when the world under lockdown held its breath for a long time and nature was given free rein in some places. Wynne (guitars and synths) joins forces once again with synth player Silas Neptune, and drummer Balázs Szende, and there are also special guest appearances from former Ozric members: synth player Joie Hinton, drummer Nick Van Gelder (co-founder of the Tentacles and also known from Jamiroquai, who once again took the snare drum that he used for the band’s first recordings in the 1980s), flutist Jon Egan, and percussionist Paul Hankin. Anyone who already knows these musicians would assume that this line-up would create more of a psychedelic synth album than classic space rock, and it’s very true.

The overall sound is always based on the synths, and somehow the guitar and drums are in the background, but it all remains very recognizable in rhythm and melody. There are the same old sounds that pick you up and take you to those far off imaginary places and then back again, and somehow you can hear echoes of their whole career on this album. Anyone who is already familiar with the earlier work of this band will immediately be able to trip on Space for the Earth. If there is one track that stands out a bit, it might be the guitar drenched Harmonic Steps. I liked their previous album Technicians of the Sacred, but at around an hour and a half of instrumental music it’s not certain that it’s going to keep your attention for the whole duration. The band here shows much more diversity and creativity for significantly less time with many dynamic changes, from something intrusive and colorful to completely relaxed and back again.

These guys certainly have a unique way of creating sound combinations. I cannot think of anyone quite as eclectic and electronic as them and yet they are always grooving me with their bass and drum rhythm tracks. Their unusual combination of spacey electronic sound with odd and unexpected world instruments never ceases to astound me. All compositions here are very good, well elaborated, and very pleasant to listen to. All the interactions of instruments and melodies are so well done. The production is warm and analogue and leaves the instruments the space they need. This an album to mentally float away, forget these difficult times and at the end wonder how those 47 minutes have already passed.

Throughout their history, Ozric Tentacles have had highs and lows, but in my opinion they never released a really bad album, and of course sometimes they delivered masterpieces. They have probably done better records in the past, but personally I love this one too. The band’s old fan base and prog rock fanatics may be a little disappointed with this one, but Space for the Earth is highly recommended to those who want to get into this band, as it’s one of the most appealing in the entire history of the band, and thus one of the most ideal starting points.

The frequency of album releases has dropped, the years have passed, but the appetite for composing music that still manages to move is still there. With their latest excellent double album Technicians of the Sacred as a starting point, the evergreen Ozric Tentacles prove that they have no rival in this particular sound with this year’s Space for the Earth. Before we talk about the music content, it is worth mentioning some elements that seem to have a semantic and background character, such as the cover art that is very reminiscent of that of Spirals in Hypertace or the guest appearances of ex members of the band such as Nick Van Gelder, Joie Hinton, and Jon Egan. Musically, this is another triumph of the prog / space sound with all those elements from fusion, electronic, ambient, dub, and ethnic music that always characterized their sound. All the compositions stand very high so it is difficult to single out any of the seven tracks, however the opening Stripey Clouds, the title track, and Humboldt Currant represent both the more guitar-based, influenced by Steve Hillage, Ozric sound, as well as the most synthy n’ trippy. Deep bow and respect.

Wednesday July 22nd, 2020 News Comments Off on Ozric Tentacles announce the release of new album ‘Space for the Earth’