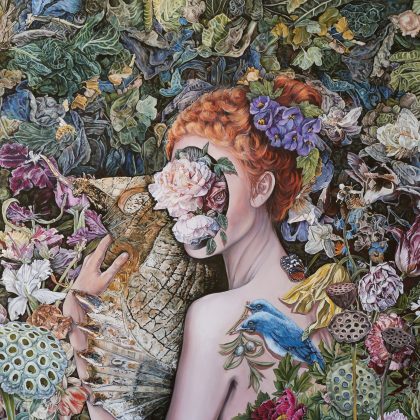 Calyces is a prog rock / heavy metal quartet from Athens, Greece which consists of Manthos Stergiou (guitar, vocals), Alexis Stavropoulos (drums), Giannis Golfis (guitar) and Stelios Tragos (bass), members of bands such as Tardive Dyskinesia, Boredrline Syndrome, Insect Radio, and Revenge of the Giant Face. The band was formed in 2018 and this year released their debut album titled Impulse to Soar.

The sound of Calyces blends prog metal in the way it was shaped through the 00’s, with the finest elements of classic progressive rock from the 70’s, something between Mastodon, Alice in Chains, Intronaut, King Crimson, Baroness, and Tool. The 10 songs of Impulse to Soar include low tuning heavy riffs with a barrage of polyrhythmic parties, alternated with atmospheric passages, emphasizing on groove, melody, and energy.

A very interesting album with clear orientation, given away by the cover art

Calyces is a band with familiar influences and a look at the modern – that of 10’s – album production with an ever present progressive aspect. Of course, the connoisseurs of the Greek scene are aware of the excellent Tardive Dyskinesia and their four albums before deciding to take an indefinite break. The singer / guitarist, Manthos Stergiou, with the collaboration of well-known musicians, gives a new expression to his vision through Calyces and their debut, Impulse to Soar.

And if the connotations that will be made from the get-go, from a first glance of the cover art that adorns the album, lead to Baroness and Baizley’s visual perception, then confirmation comes with Those Flames Are Dancing Wild, and there is no doubt about one of the sources of inspiration behind the release. Nevertheless, Impulse to Soar attempts to give a dynamic that does not walk the line between a disguise that is not open to criticism and progressive innovations. The Mastodon and Baroness elements are often presented in an obvious way, but the compositions are also built on the Intronaut logic and the progressive comfort provided by the combination of alternative and modern prog metal.

So, from the beginning, it is understood that compositionally, Calyces mix their influences quite clearly, but with the ability of a group that’s able to render its vision in a variety of ways, whether that has to do with the sharp, modern riffs (False Awakening , Wired Down) or the more atmospheric passages that remind us of Tool (Home, Uneven Loops). And if the Mastodon logic in the riffology that characterizes the album marks its general style, the flow in Unfair Labor meets something from Tardive Dyskinesia’s latest album, and the participation of Jørgen Munkeby (Shining) with a saxophone solo which makes the necessary transition to a jazz reference, is more than welcome.

Overall, from their first record, Calyces seem to be able to create music based on the combination of their influences and the opening of a new path in their compositions, combining melody, dynamics, and leaving room for the ideas to expand. At 58 minutes or so, Impulse to Soar manages to win the impressions with its modern musical style and its wonderful cover, but most importantly, it leaves promises for the future.

If you had listened to Impulse to Soar without knowing that Calyces is a Greek band, you’d probably guess that it is an American band influenced by Mastodon. Beyond the obvious aforementioned influence (mostly due to the vocals), I’d say the music of Calyces is a mix of Canvas Solaris and Baroness. In their rhythmic parts, they have this tech / math element which is very well combined with melodic southern leads, and the result is well-played modern prog, with such perfect sound that you’re unconsciously open-mouthed. The technical skills of the four musicians are impressive, while the guitar solos are the icing on the cake and what really sets them apart from other bands of the genre. A typical example is Those Flames are Dancing High. A nice touch in Parasites and False Awakening is the clean tone points on the guitar that give a jazzy feeling, while in Unfair Labor they achieve this by using saxophone (which fits perfectly). On the other hand, Ego Dries up the Ocean and Wired Crown are more direct and heavier, showing that they can easily be aggressive. They remind me a little of Anciients. In general, Calyces seem to know what they want to play but also how to achieve it, and thus their debut is an amazing album. I personally consider it one of the best records of the year. Well done!