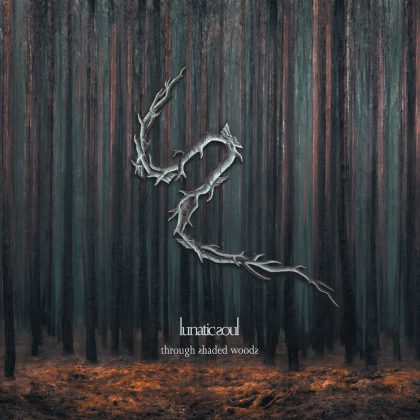 The ever creative Mr. Mariusz Duda is back with his second release this year. Earlier this year he released Lockdown Spaces, a mainly electronic album inspired by… the worldwide lockdowns. Late in 2020, he now releases the 7th Lunatic Soul album entitled Through Shaded Woods with Mariusz holding the sole credits for all vocals and instruments for the first time in a Lunatic Soul record. Being inspired by the rural landscapes of his home country of Poland, Duda manages to create an earthy feeling to the album with inspirations from Slavic and Scandinavian folk music. To what extend does he manage to create a stellar outcome? That remains to be seen…

A creative vision is usually something that elevates the level of the artistic piece. When it comes to music, if the artist has a vision about the story they want to tell and the way that they want to present the story it usually makes for at least an interesting listen. When it comes to Lunatic Soul and Mariusz Duda, the result is not only interesting but also evocative. The story of life and death he wants to say in the span of 8 albums makes for a more active listening of the records rather than the passive, “something to play in the background” listening of a record. Even if the albums are composed by mainly atmospheric and sometimes ritualistic elements.

Through Shaded Woods is the 7th album of Lunatic soul in the 8 album story that Duda planned to narrate. Navvie introduces the strong aspects of the album perfectly. The strong interaction of rhythms and the styles of music. Constant rhythms, chanting-like vocals and folk guitars to create a beautiful song. As the album progresses more modern elements of music are introduced. Distortions in instruments, distortions in vocals, and electronic rhythms. What has made the Lunatic Soul albums special to me is the breath for patterns to evolve and the feeling of exploration in the tracks. This is slightly more noticeable in The Passage which can get a bit repetitive after multiple listens as it starts with a similar folk essence as Navvie, but it slowly explores the addition of distortions which make it quite heavy.

The title track made me double check the quality of the connection of my headphones since there are some distortions in the vocals of Duda that make him sound as if he’s underwater. An interesting idea, which however pulls you a bit out of the earthy atmosphere of the album so far. Oblivion brings back the more earthly and folk feeling. A pagan festivity on a calm night with people gathered around the fire.

Summoning Dance has a more of a singer-songwriter feel, starting with a guitar and Duda’s excellent voice. However, it climaxes to a more powerful folk song which is in the more lively “aggressive” side of the album (in Lunatic Soul standards). The simple version of the album ends with The Fountain which closes the circle of the album as a more somber ballad.

In the 39 minutes that the normal version of the album, it is a definitely satisfying album that puts another piece on the puzzle that is the discography of Lunatic Soul. There is a big “but” however. The deluxe edition of the album includes three more songs that add a lot to the release. The intense experimentation that Duda has demonstrated (especially) in the first releases is more prevalent here. While songs like Vyraj and Hylophobia are busier in terms of sounds, they make the overall listen a bit more adventurous.

The big addition however comes with Transition II. In the almost 28 minute opus (70% of the length of the simple version) Duda gives more space to his ideas and manages to combine more elements of electronic, shamanic and ambient music with a great result. It brings back patterns from earlier in the record and the back catalogue of Lunatic Soul. Elements that will remind you a lot of Mike Oldfield, Vangelis, and Tangerine Dream. And what always elevated these compositions by Duda is the effortless flow from one facet to the other. This song by itself could make this release worthy of purchase. The normal version finishes with the feeling of something missing which is then delivered in the deluxe version. Which makes grading a hard task. But not impossible…

From the first second of Navvie, the style of the album is pretty obvious: atmospheric, intensely folkloric, mystical. After closing your eyes, you feel like you are being transported to a pagan Scandinavian ceremony in the forest. With The Passage starts the narration of the story. Our hero, and us with him, enter the forest, voices and mysterious sounds are heard around us, the atmosphere is tense. The use of electric guitar is minimal. As the album flows, the story unfolds in the forest, where the hero tries to meet Lethe and free himself from Furies. Dancing a Summoning Dance he tries to break the curse. Mariusz’s voice is enchanting but in this song it sounds more fragile and enchanting than ever. In Fountain we move away from the darkness of the forest. It is a sentimental piece, a different kind of ballad, where the hero accepts his loss and the darkness is removed momentarily. The songs that follow (Vyraj, Hylophobia, Transition II) included the second disc of the deluxe version are more intense, more rhythmic than the previous ones. Especially Transition II, the longest on the album, sounds like a summary of all Lunatic Soul releases in a single 28 minute masterpiece.

Thursday August 6th, 2020 News Comments Off on The Pineapple Thief release video for new single ‘Versions of The Truth’