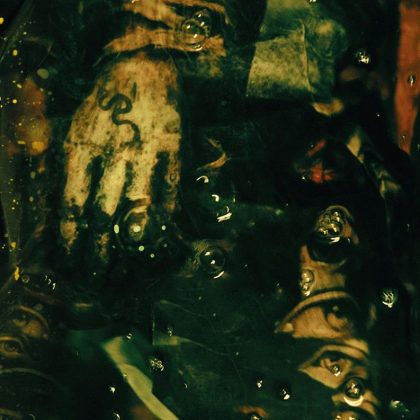 The band with a name inspired by Mesopotamian mythology and specifically the demon Pazuzu (Oranssi means orange), as well as the strange titles and lyrics sang in their native Finnish language, is releasing its fifth album titled Mestarin Kynsi. From their debut album, Muukalainen Puhuu (2009), they had shown that this is a special and extremely interesting case of a band.

The peak of the creativity of progressive black metallers Oranssi Pazuzu came with their previous album, Värähtelijä (2016), which was able to take them out of the underground level of the otherwise stunning Svart Records, with this year’s release finding them in Nuclear Blast, which probably promises to introduce them to a larger audience.

Invitation to a sunless world

Mestarin Kynsi consists of six tracks with a total duration of 50 minutes. The inaugural Ilmestys with its ritualistic intro assumes the role of introduction to the band’s weird space-time. The always demonic growl vocals sound like some kind of invocation and the amazing atmosphere of the song culminates in the industrial / electronic sounds of the keys and a black metal burst at the end of it.

In Tyhiyyden Sakramentti the space atmosphere and the Hawkwind like keys of the informal first part are “dissolved” by a barbaric black metal outburst and the redemption will come with the majestic cinematic keys at the end. Uusi Teknokratia, that has also been selected as a promotional video for the album, is actually an edit version of the album since that in the album lasts 10 minutes, is characterized by the constant repetition of a haunting psych theme in the flute and ultra-extreme black metal vocals.

Though the basic combination of black metal element with prog influences and krautrock elements exists, there is more openness to the compositions compared to their previous works. Perhaps this approach influenced Waste of Space Orchestra, the project formed by members of Oranssi Project.

Oikeamielisten Sali is a great composition with string instrument participation, electronic sounds and of course black metal. Perhaps this approach will also be an inspiration for the group’s next albums, on the grounds that they obviously fond of the gradual integration of new sounds.

Kuulen Ääniä Maan Alta carries industrial / tribal elements as well as electronic sounds. The apt use of keyboards is one of the elements that sometimes complements and sometimes emphasizes the black metal atmosphere that prevails throughout the album.

The album closes majestically with Taivaan Porttii which refers directly to Norwegian black bands such as Emperor for example, but in the context of a cinematic nightmare.

The five members of Oranssi Pazuzu manage to sound like a grand orchestra where under the flattening sound and the several layers of instruments hide dozens of ideas and emotions. There is no light in the Mestarin Kynsi erevos, no trace of hope is detected. The album happens to coincide with the global dystopian conditions that we are experiencing and could describe the most extreme form of negative emotions one can feel.

Mestarin Kynsi tests the listener’s strengths. Oranssi Pazuzu continues to choose the left hand path and invite the listener to their own sunless world.

When I heard that Oranssi Pazuzu got signed by Nuclear Blast, I was quite concerned about the group’s next step. Their excellent work has always been characterized by freedom and the German record label is not known for releases that have this restless spirit. However, Mestarin Kynsi completely contradicts me, since it features the distinctive sound of the Finnish (say psych-black metal) band and even without any discount on the build of compositions (all over 7 minutes long), but also on the extremity of the metal they include. Fatally, there will be comparisons to last year’s, eeriely dark art of Waste of Space Orchestra, and the verdict on which of the two is better is extremely difficult to come up with. Unlike the homogeneity of Syntheosis, Oranssi Pazuzu’s new album has a variety of how it diffuses its music among familiar methods (it’s common practice nowadays to add an essence of space-rock to sound cool). The rhythmic Hawkwind-like references in Uusi Teknokratia and the synth loops in Kuulen Ääniä Maan Alta up to the intelligent black metal in Taivaan Portii and the post-rock escalation in Oikeamielisten Sali, all tracks prove that they can bring every influence very close to their style.