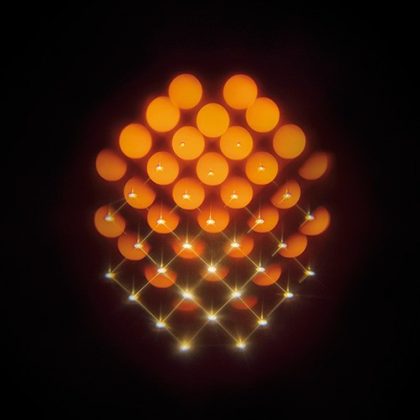 The formation of Waste of Space Orchestra was totally paradoxical. Members of two Finnish bands, Oranssi Pazuzu and Dark Buddha Rising, played live at the famous Roadburn festival in 2018 in the Netherlands, after an invitation by the organizers. They presented a set of nine new songs and after the instigation of those who did not attend the concert, the musicians were “forced” to record their setlist in the studio. Thus, Syntheosis came to reality, and was released via the Finnish Svart Records, which is also the record company of Oranssi Pazuzu.

Oranssi Pazuzu belong to the generation of courageous musicians, with black metal as their main field, while on the other hand they extrapolate with extraordinary influences from other music genres. Thus, they managed to distinguish themselves for their quality work in the field of extreme metal. Dark Buddha Rising is a doom / sludge / occult group with many years of presence in the underground scene.

Syntheosis starts dynamically with Void Monolith, an instrumental doom metal gem, with a distinctive majestic and imposing rhythm. Shamanic Vision follows, bringing something from the atmosphere of oriental music. Black metal rhythms and guitar beats that sound like a ritual instrument of a Shaman who calls his dark flock to a ritual. Let’s not forget that Pazuzu was the lord of the demons of the winds according to the mythology of the Sumerians. Seeker’s Reflection, which has been unofficially selected as the single of the album, is a nightmarish composition with stunning black metal vocals filled with passion, but the whole rhythm has a rock groove. Then the bombastic rhythms fade, as the 10-minute Journey to the Center of Mass tilts towards the psychedelic and krautrock influence, but also includes a black metal vocal outburst.

The paranoid vocals in the introduction of Wake Up the Possessor reminded me of Mr. Doctor of Devil Doll. The vocal interpretation is creepy. As a singing of a lullaby that will not ideally bring Morpho as the redeemer, but the Mesopotamian Demons as the worst nightmare. As with the relentless black metal outbreak that follows, it is taken out of the best moments of the Norwegian scene. It is worth mentioning that three people share the vocals alternating according to the needs of the lyrical concept that serves the album. Shaman (Vesa Ajomo) who sees visions of the bleak future of mankind, Seeker (Juho Vanhanen) seeking the truth in other dimensions with mystical methods and Possessor (Marko Neuman) trying to corrupt them in a devastating plan.

At Infinite Gate Opening, the contribution of the ritual element of Dark Buddha Rising music appears to the utmost. A purely ocult composition with the imposing drums accompanying it and some electronic touches as well as choir vocals embellish the composition. Vaccum Head clearly reminds us of Oranssi Pazuzu, with its nightmarish psychedelic black metal rhythms that lead to The Universal Eye. Waste of Space Orchestra play brilliantly with rhythm changes. This is an instrumental ambient composition the small details of which make it a small masterpiece, such as the sounds of a turntable needle on a dusty record.

The doom title song completes the album. Thirteen minutes which summarize the album. Occultism, darkness, psychedelia, theatricality, despair, nightmare. Calmness and redemption are transient concepts in the world of Syntheosis.

Waste of Space Orchestra released a triumph of extreme progressive music. The informal call of the dark ancient mythological deities of Mesopotamia that takes place while listening to the album is also the ideal soundtrack of our most chaotic nightmares.

The debut of the collaborative project of Waste of Space Orchestra is not just an album. It is a narrative eerie story, a cinematic experience, interconnected in a grandiose combination of styles, overflowing into a trippy voyage.

Syntheosis is an occult ceremony of avant-garde black metal embracing psychedelia and progressive as the central components and harnessing the cosmic energy of krautrock. The Shaman, The Seeker, and The Possessor each possess a voice that contributes to the progressive sludgy rhythms, the electronic effects along with the complex rock jams and the atmospheric blackened guitar trills, creating a result that will make you feel uneasy.

The sludgy heaviness in Shamanic Vision, the dissonant patterns in the haunting Seeker’s Reflection, the captivating dark ambient Journey to the Center of Mass, the witch-compelling Wake up the Possessor, the synthy complexity in Vacuum Head, the trippy odyssey in Universal Eye and the doomy tempos in Syntheosis offer diversity between the songs that are so coherently executed, making a performance with ten musicians sound extremely balanced, in an album that oscillates from the doomier tones to the blackened extremity.