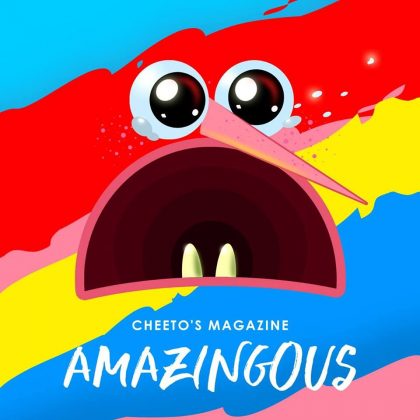 When Cheeto’s Magazine released their debut album entitled Boiling Fowls in 2014, the reception from fans and critics alike was very positive, not just because it was a very good album. The Catalans presented their own version of progressive rock which, although it stands with a foot and a half on the classic version of prog sound, sounds quite modern with humor playing a central role in their music.

Their second album with new material was released this year entitled Amazingous and their unconventional character draws attention once more. What exactly do the “men in tights” (that’s how they appear in their concerts) have in store for us honors them now in the prog scene. But let’s start from the beginning…

Such humour needs to be taken seriously

If there was one element in Boiling Fowls (2014) that created reservations for the future of Cheeto’s Magazine, it was the investment in humor in comparison to the compositional part. When the first listen of Amazingous was completed it sufficed to prove that the wait was worth and that the band has put in a lot of work in many sectors.

Musically, the style of the Spanish progsters has not changed one iota. The modern crossover prog with the traditional, yet far from retro, symphonic character is the same they presented to us five years ago. The big change, however, lies in the compositional aspect and the coherence of the songs. The flow of the album is more successful, resulting in repetitive listens.

Chili Guillermo is the perfect starter, with the keys of Navarro and Lizana in the lead and some of the best vocal lines we have heard so far in this year in prog. Cheese Cheater is even more catchy and proggy (yup, indeed). The familiar humor of the band dominates here and the development of the song concentrates a lot more than someone would expect in a 6.5-minute song, plus the beautiful guitar solo from Orella. In the same unobtrusively happy style, Outflow is as interesting, with the vocal lines still gaining attention, while the rhythm section of Marques (bass) and Sala (drums) is starring in rock and latin style. In Ready to Rumble prog rock is paradoxically and very successfully married to the 80s hard rock (poser to be exact) and modern metal with the result being quite impressive. Close Your Eyes starts off as a ballad and it evolves into a Dear Hunter-meets-80s-pop style which closes with a melodic and pompous fashion leaving questions even to the most acquainted. Scum is a necessary instrumental break that showcases the technical abilities of all the band-members, right before the poppy A.W.K.W.A.R.D. which sounds like the ideal mix of the melodic lines of Styx, the symphonic parts of Queen and the narration of the modern US crossover prog (that’s right, Dear Hunter again).

The above would be enough for any band, but not for Cheeto’s Magazine. The album ends with a 25 minute-long epic that has all the space and time for the elements that constitute the mosaic of their sound to develop. The most impressive of all is not the absence of the unnecessary and overextended “atmospheric” alibies, but contrariwise, Big Boy is a dense song with a chorus, clear structure and variety that exceeds in musicality the whole carreer of many bands in the genre. Granted, some parts are less inspired than others, but the performance of the quintet is undoubtedly their peak so far. This magnum opus is enough for someone to go and see them live (because it is certain that they will play this song in every chance, they are amazing on stage).

Amazingous is not simply better than the debut of Cheeto’s Magazine and one of the most interesting albums of 2019; it is the proof that melodic progressive rock can be cool, be presented with humor and simultaneously be extremely purposeful. The whole album might be full of trolling, but in the end it can inspire respect for every melody and mainly for the aesthetic result that belongs exclusively to the band. All this, under the condition that you are a progressive rock fan…

With the amazing Amazingous, the magnificent Iberians Chetto’s Magazine continue exactly where we had left them after their debut, creating one more good symphonic progressive rock album. The special elements that made them stand out from the lot of the genre are once again apparent. More than great compositional abilities, their big attribute is the humor and the personality with which they approach a genre which seems to be stale artistically. It is very pleasant in 2019 to hear a band that draws influences from Spock’s Beard to approach their music with a relaxed mindset. Sometimes the vocal approach and the modern sound are incorporated imaginatively into the strict structures of the songs. The age of the band members puts them in a spot where most of the humor is inspired by the internet and trolling. This is evident in their music without being annoying. Amazingous definitely won’t change the life of the listener, but it is definitely suggested to anyone that is looking for a refreshed approach to a genre full of artistic dinosaurs.