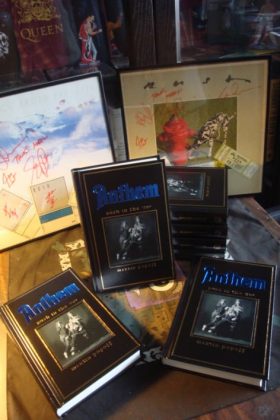 Canadian music journalist, critic and author Martin Popoff has written 85 books about rock music and Anthem: Rush in the ‘70s is the first in the series of three books about the legendary trio from Toronto.

Anthem: Rush in the ‘70s is a 354-page deep dive into Rush’s origins and their first batch of classic records. Anthem comes very fancy-like, swaggering into view as a hard cover with foil and embossing. There are two eight-page colour sections, but mainly lotsa words, in fact, 126,000 of the little critters.

Τhere’s extensive discussion of the childhood and teen years, leading into separate chapters on Rush, Fly by Night, Caress of Steel, 2112, All the World’s a Stage, A Farewell to Kings and Hemispheres.

Inspired by what Popoff had to do on his recent Led Zeppelin and Clash books (i.e. writing 500 words on every single song), there’s far more song-by-song analysis than he stuck in any of his previous Rush titles. But there’s also a trove of unseen first-hand interview material with the band as well as engineers, producers, managers and other industry movers an’ shakers.

Geddy Lee: Rush don’t have any unreleased songs ‘worth a damn’

Wednesday October 7th, 2020 News Comments Off on Geddy Lee: Rush don’t have any unreleased songs ‘worth a damn’