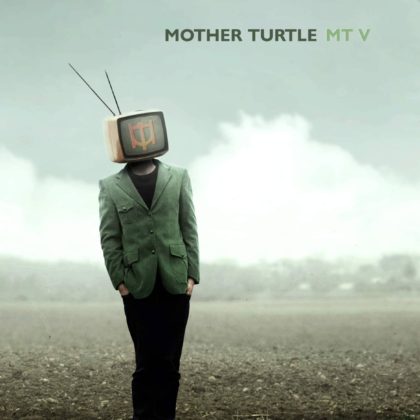 Their 2013 self-titled debut was a great heavy prog album with elements of symphonic progressive. Three years later, II impressed us with its grandiose vintage sound and direct references to the golden era of progressive rock in the 70s. Zea Mice (2018) marked another change in the band’s style, with instrumental tracks and references to the most adventurous sounds of the 90s, while Three Sides to Every Story (2019) was the band’s most experimental moment to date, with elements of jazz-rock  and avant-prog added with utter success.

Mother Turtle is not just another progressive rock band, they are a perfect example of prog in its purest sense. The group from Thessaloniki, Greece follows its own course which certainly does not follow a straight line, putting new challenges to the listeners, as well as themselves, at every step. MT V is no exception. On the contrary, it is their most daring venture to date, as this time they bring alternative rock to the fore.

It may have only been three years since 2019 when Three Sides of Every Story was released, but for the vast majority those years have been so dense that it almost equates to a decade. One of the things that didn’t change at all was what Kostas Konstantinidis had told me at Mother Turtle’s last concert in Athens, that in the next album he wanted the “turtles” to take a more grunge / alternative turn compared to their until then prog rock profile.

And the truth is that from the first notes of the excellent Suicidal Hornets (with Mars Blackbird on vocals), the incorporation of elements from the last great rock movement that affected the entire planet (grunge of course) is clear and its influence is all over MT V, Mother Turtle’s fifth full-length album. One of the first things that impresses is that Kostas Konstantinidis concentrates 100% on guitar, leaving the vocals to eight impressive guest appearances, one on each tracks of the album.

What follows is even more impressive with The Great Unknown, with the Alice In Chains influences stronger than ever and Tryfon Baltsis indulging in a passionate performance. The saxophone of Babis Prodromidis, the vocals of Moss Doe and the rhythms that move somewhere between trip hop and the Perdition City era of Ulver signal the change of musical scenery, in another winning bet for Mother Turtle. Aura and Bystander Effect where we hear the beautiful voices of Meliana Karta and Chrysa Tsaltabassi respectively, continue in almost the same musical pattern with the first having a more radio friendly approach and the second a more cinematic one.

The clearly heavier moments of MT V that approach progressive metal at points are Reasons and Open Vein. Not coincidentally, the singers here are our beloved Jon Voyager (Need) and Cons Marg (Until Rain, Hail Spirit Noir) respectively. Although it often sounds cliché, the nine-minute Last Reverie with Panos Doukas on vocals that closes the album combines all the aforementioned elements and is probably the most complete composition of the album. It’s worth mentioning that a short version of Last Reverie is also included.

Overall, we are dealing with an excellent release, where once again Mother Turtle do not compromise and of course are not afraid to experiment with new elements. After all, for the fifth time in a row they change their style and sound with enviable artistic success. The solid rhythm section, the amazing work on the guitars and, most importantly, the high level songwriting are once again the secrets of Mother Turtle. Let’s hope to enjoy this new material live soon. In Mother Turtle we trust!

During their recording career, Mother Turtle have never been afraid to change their style. On the one hand, the reduction of vocals and the introduction of jazz-rock elements in the two previous records, and on the other hand, the gradual flirtation with more alternative sounds, advocated their constant tendency to change. Nevertheless, their choice to have guest singers in all their new tracks, as well as the deep dive they attempt in alternative rock, is certainly a surprise.

MT V is a very good heavy prog album, with the heavy element coming from 90s alternative hard rock (mainly the Seattle scene) and the prog touch also leaning towards the more modern versions of the genre. The decision to include all six band members adds to the sonic depth and variety of instrumentation, despite the logical dominance of the guitar for the most part. The eight different singers help the most in highlighting the compositions and the diversity of the record, but at the same time it is impossible not to alter the coherence of the final result.

MT V initially seems like a parenthesis in the Turtles’ discography, but it won’t be at all strange if it has quite an impact on their continuity. Whatever happens, it is in itself a collection of eight very good to great compositions, mixing alternative rock with a prog background, something very rare by Greek standards. Those who would like to hear what Alice in Chains would sound like if they turned prog have to listen to this.