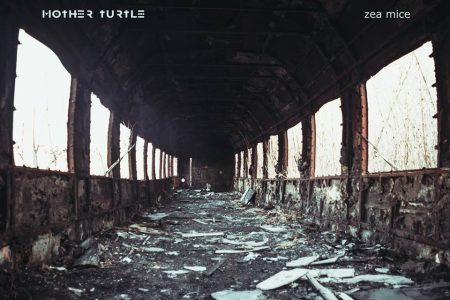 If there is an element I’m looking for in a prog band regardless of the subgenre, it’s unpredictability. Mother Turtle own this particular element as a key part of their temperament, and that was evident in both their self-titled debut (2013) and II (2016) that followed. Even within each album, the different elements vary and even the basic direction of the tracks is not necessarily the same. Zea Mice confirms the above in a festive manner, being the most challenging listening experience they have offered us till this day. And it is released today (20/2)!

Having the great honor and joy of having reviewed both of the first two albums of the prog rockers from Thessaloniki, I can say that I have carefully studied their work, and their impressive sound evolution since 2013. An evolution that is fully depicted in this year’s third album entitled Zea Mice.

The line-up of Mother Turtle remains the same compared to the most recent II, with Alexis Kiourntziadis and Babis Prodromidis on violin and saxophone respectively, having a clearer role in the sound of the band. The jamming spirit they seemed to adopt in their previous album is not only continued but is now the vehicle to explore new prog paths. One would say how the neo-prog / symphonic style of their debut has almost disappeared, while the jazz-rock / Canterbury elements of II have been adorned by psych / prog touches that bring to mind the best moments of the 90s era of Ozric Tentacles and Porcupine Tree.

This new style of Mother Turtle kicks off ideally with the opener, Kukuruzu, an excellent composition that encompasses all elements mentioned above. In #Cornhub the guitarist and leader of the band Kostas Konstantinidis really shines, both at the a la Al Di Meola latin passages and his wonderful solo. In the same track, the work of Alexis Kiourntziadis on violin is just amazing, reminding of Jean-Luc Ponty. The introductory keyboard melody by George Theodoropoulos in Sea Mice give way to a drum n’ bass ‘carpet’ reestablishing a jamming feast based on the guitar / violin dipole.

The rest is also breathtaking with Vermins, perhaps the most experimental and dark moment of the album where Elpida Papakosma participates on vocals and Apostolis Georgiadis on percussion. Especially from the middle of the composition is really impossible to be described in words, I humbly bow. The introductory Fourward and Vermins (Reprise) are something like a breath before the last 16 minutes of the album. The aforementioned development of the band when combined with talent, technical skill and inspiration may result in compositions like Nostos. Jazz-rock aesthetics, fascinating melodies and ideas that follow one another with cinematic speed, bold elements of Balkan and Greek traditional music, all together in a unique blend that bears the signature of Mother Turtle. It may be too early to say that, but I find it hard to listen to any progressive rock composition superior to Nostos.

The production and mixing by Kostas Kofinas is probably the best on any Mother Turtle album, and since there was no previous specific reference, the work of Giorgos Filopelou and Giorgos Baltas on bass and drums is great and the ideas of George Theodoropoulos on keyboards are more mature than ever. The giant step that we waited for has been made and it is called Zea Mice, an album that will certainly be included in any serious 2018 prog list. Bravo!

With Zea Mice, the Macedonian prog rockers make another giant musical step. This is their most mature and targeted album to date. First, their decision to minimize the vocal parts (except some vocalese) proves to be wise. The jazz-fusion and Canterbury elements of their previous album really take off here. A magnificent alternative air connects every part of their sound, coming mainly from Porcupine Tree of the 90s, and some Ozric Tentacles touches in Kukuruzu add to the variety. The six-member line-up is definitely tighter this time. Every little detail that characterizes the quality of a record is a click above compared to the past. With their third album, the Turtles seem to come out of the ‘shell’ of a prog fan and create a personal musical proposition. The first seven tracks are a wonderful set, and the epic Nostos drops the curtain festively, merging Pontian music with progressive rock and jazz, being compositionally the essence of the word fusion.

Kostas Konstantinidis (Mother Turtle): “Τhe element of surprise is the quintessence of prog”