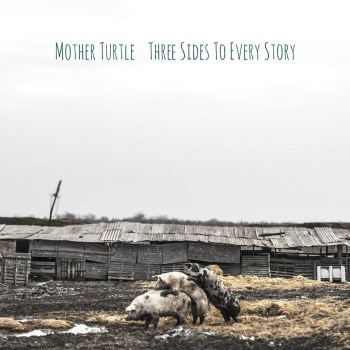 Since 2011, Mother Turtle have been developing their ideas in multidisciplinary music ensembles. In four albums that move the mind through a true, attractive and constantly evolving progressive rock perception, Mother Turtle deposit a diverse soundscape that doesn’t seem to fit any specific genre.

In 2013 their self-titled debut was released, an album with perspectives, rich style, voluminous orchestrations and harsh complexion. The follow up was II, three years later, where the eclecticism of the group acquires new dimensions and dynamics, the symphonic dimensions of their style spread in a bigger room, plus the fact that their self-confidence arose and pushed them in jazz-rock directions through the Canterbury tradition (our reviews here).

In 2018, the exciting Zea Mice was released which intensified the fusion character of the band, further digesting their purpose from different places in the world map (and eastern) and some –‘90s and later – space prog elements expands creatively their jam aspects (our reviews here).

Less is more and more

This album will bring a new look both in the way the band is built, and in the material that will represent a new era for the band. A new outlook that seems to not alter the existing ideological base or the possibilities and prospects their style had until today.

The first significant change in the norm of Mother Turtle concerns the band line up where they had settled as a sextet. Now they rely in half the members with Kostas Konstantinidis (guitar, guitar synths, keyboards, vocals), George Filopelos (bass, vocals) and George Baltas (percussion, vocals). The second reasonable and inevitable change corresponds to the redefinition of their orchestrating practice, and how this would allow them to perform their ideas in the shape of a single track.

Following their standard routine, in Three Sides In Every Story they defy the norms, not only in the frame of the whole vision they formulate, but also in each of the compositions, where pluralism, the variety in melodic and rhyrhmic escalations are charming. This mentality is usually apllied in big bands. In this case, the expressiveness of Mother Turtle works magnificently. Therefore, the question about the orchestration is answered and the success of the three-piece band lies in a consistent and fluid collaboration of the individual units, where the archetype of guitar – bass – drums, with some additional keyboards, introduce a wonderful effectiveness in the formation and implementation of the songs.

There are some parts that dominate in the sonic mosaic of the fourth LP. From those, I think that we’ll surely choose the fulfillment of their need to sound different in each of the three songs of the album, and simultaneously manage to keep the character and the peculiarity of their music. They expand the limits of their style both in length, adding more ingredients, and in width, working further in the already exploited and conquered elements of their songwriting style. After all, they explain themselves in the title: they present us three sides to every story. And they successfully and emphatically do so.

You catch yourself in ecstasy with the changes of style like in the opener Zigu Zigu, where the constant slalom from heavy rock (with some post-Hendrix / post grunge elements), and the cyclic cerebral patterns engine up in a humoristic narration line by Konstantinidis. It’s also this feeling or rather the proof that the band moves wonderfully between avant-garde experiments, improvised structures with a clear organic core and elements of songwriting, that with the widely known sense, it’s hard to categorize it in terms of songwriting.

These thoughts, these conclusions if you will, find a headrest in A Christmas Postcard From Kim a wholeheartedly hybrid act. A sequence of orientations that just like the previous track, entitled Notwatch will pinpoint their choice to regulate the moods and the emotional burdens through the sharpening of their soundscapes and the planking of the intensity between the instruments. Under these circumstances, Mother Turtle will showcase more of their graces, crossing through the fields of the US 90s alternative rock  (mainly grunge) and sometimes even a metal dimension. What’s also important is the fact that in less than 40 minutes it is evident that this band will not sacrifice their sensuality for any self-indulgence. On the contrary, their technical expertise happily intensifies their mark to the listener.

In 9 years of musical life, and with Thessaloniki as a base, Mother Turtle have served a weave of audio snapshots that the past of the progressive (and not only) rock incorporates creatively the present that they constructively plan and the future that they patiently prepare.

Three are the members of Mother Turtle, and three are songs in their new album, with Zigu Zigu starting with a Rush-like heavy riff that grabs you by the throat. The plays of Konstantinidis do not leave any space for doubt for his guitar talent and the flawless rhythm section of Filopelos / Baltas changes the rhythms and moods with ease. The fantastic Notwatch excites with the jazz-rock / fusion melodies, while the psychedelic experimentations, the sampling of a folk song and the dynamic heavy prog finale certify the ease in which the band can move between different genres in the same composition. The magnum opus of the album with the amazing title A Christmas Postcard From Kim starts with some more amazing riffs with an intense Jerry Cantrell feel, while the following influences parade: heavy guitars that at times are very metal, very dark atmosphere, modern approach and all of that goes through their personal filter.

Mother Turtle sound -maybe for the first time- so tight but at the same time so relaxed. It seems that they have found a unique chemistry. Three Sides To Every Story  gives the impression that is the result of endless rehearsals that they wholeheartedly enjoyed. For the third time Mother Turtle will be in my personal top-10 of the year. Oh, and this is the best album art for this year…

KC on tour again and EP in honour of David Bowie!